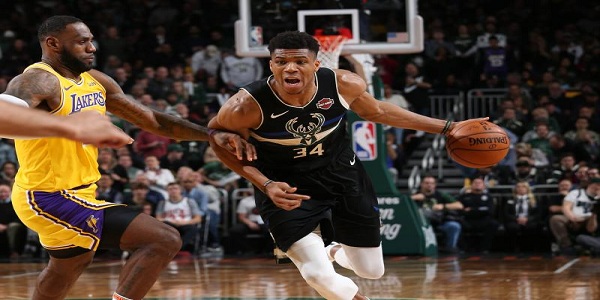 Friday night brings a must-see interconference clash between the two best teams in the NBA. The Milwaukee Bucks (53-9; 36-26 ATS) visit the Los Angeles Lakers (47-13; 33-26-1 ATS) at Staples Center, and we expect to see a tremendous battle in their second and last meeting of the regular season. Back in December, the Bucks beat the Lakers 111-104 as 3.5-point home favorites. Milwaukee is undefeated in six straight encounters with the Lakers.

The Bucks are without Kyle Korver (back) and George Hill (groin), while the Lakers miss Alex Caruso (hamstring), but both teams can count on their key players.

The Lakers opened as slight 1-point favorites with a total of 227.0 points at Betonline, Bovada, and 5Dimes. With the money line odds at -110 on both clubs, don’t bother with a spread, of course, if we don’t see some dramatic changes.

This is arguably the last chance for the Lakers to stay in the race with the Bucks for the best record in the league. Both teams have a comfortable lead in their conferences, and the Bucks are five games ahead of the Lakers.

Milwaukee is coming off a 119-100 victory over Indiana this past Wednesday. The Bucks easily covered an 11-point spread. They start a three-game road trip Friday night and will play in Phoenix on Sunday. The Lakers are coming off a 120-107 home win over the Philadelphia 76ers on Tuesday, covering a 10-point spread. After the clash with the Bucks, the Lakers will meet the Clippers on Sunday.

The Bucks beat the Lakers in December mostly thanks to a furious first-half performance. They had a 19-point lead at halftime, and the Lakers couldn’t recover despite winning the third quarter 35-24. Both teams shot just under 47.0% from the field, while the Bucks hit four triples more than the Lakers who outscored the Bucks in the paint (42-34).

Giannis Antetokounmpo led the way for the Bucks with 34 points, 11 rebounds, and seven assists while making five of his eight 3-point attempts. George Hill added 21 points off the bench, but he’ll probably miss Friday’s game. On the other side, Anthony Davis had 36 points and 10 rebounds, while LeBron James posted a triple-double of 21 points, 12 rebounds, and 11 assists.

Look for those guys to lead the way once more Friday at Staples Center. Giannis Antetokounmpo will certainly need more help from Khris Middleton who’s been averaging 24.0 points and 7.6 rebounds over his last eight outings. The Lakers will be all over the Greek Freak, so his teammates will have to step up and make open shots.

On the other side, the Lakers will have to slow down the tempo and play responsible offense because the Bucks love to push the ball in transition and get easy baskets. Milwaukee is first in the league in points allowed per 100 possessions (101.3) and opponents field goal percentage (41.1%), while the Bucks’ pace of 105.0 possessions per 48 minutes is the fastest in the NBA.

The Lakers will be fired up to get payback and send the message to the mighty Bucks. I would go with the hosts to win at money line odds, but keep in mind that taking the side bet in games like this one is a huge risk. However, the Lakers play tough defense, as well as the Bucks, while their offense is lethal with LeBron on the floor, so I think there’s a value on the hosts in this one. The Lakers are 0-6 SU and 1-5 ATS in their last six meetings with the Bucks.

When it comes to totals, I’m backing the over. Although both sides are terrific defensively, they execute offensively at the highest level, so a 227-point line doesn’t seem too high. Interestingly, the Bucks’ last five games went in the under, as well as three of the Lakers’ previous five contests. The under is 4-2 in their last six H2H duels including the first meeting of the season, so I’m going against the betting trends.