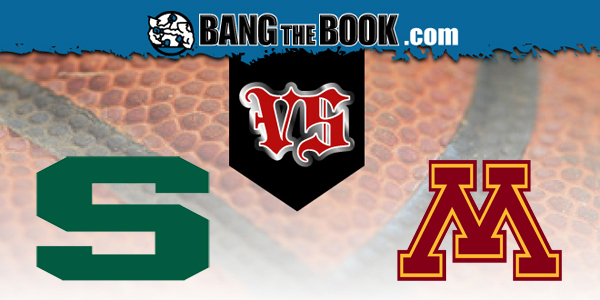 The Michigan State Spartans suffered a setback in their most recent game and now they’ll look to get back on track with Monday’s matchup against the Minnesota Golden Gophers.

Though Sparty has not been kind to bettors with a 2-6 ATS record, overnight and early-morning betting action came in on the road favorites with a move up from -1 to -2.5 at BetOnline Sportsbook. This one has a lofty total of 155.5 after touching as high as 160.

We’ll break down both sides of the game and attempt to find a play for this Big Ten clash with an 8 p.m. ET tip-off on the Big Ten Network.

Michigan State has actually suffered two setbacks in a row, with conference losses to Northwestern and Wisconsin. Starting 0-2 in conference play shouldn’t be that big of a deal for Tom Izzo’s team in the long run, but three straight bad defensive performances have raised quite a few red flags.

Over the last three games, opponents are 36-of-74 from 3 against Michigan State. Prior to the last three games, opponents were 27-of-101. It would certainly help if Michigan State could force a few more turnovers. Their TO% of 14.5% ranks 320th in the country per Bart Torvik. They’ve taken decent care of the basketball, but not stealing some extra possessions has been a hindrance on both ends of the floor.

In the most recent loss to Wisconsin, Sparty had twice as many turnovers and lost despite shooting 8-of-11 from 3. From a tempo standpoint, this is the fastest that Michigan State has played under Tom Izzo dating back to at least 2008, but the last two games have played to 69 and 68 possessions, so it’s fair to wonder if this total is a little bit high with Sparty starting to play a bit slower and a bit more like normal.

One factor for Michigan State could be too much depth. Only Aaron Henry has played over 70% of the available minutes. Izzo has used a lot of substitutions and different lineups and it may be possible that the team just isn’t communicating or rotating well enough on defense.

Aside from a blowout loss to Illinois by 27 back on December 15, the Golden Gophers have done just about all that has been asked of them. Unlike Michigan State, who has been burning bettors’ bankrolls, Minnesota is 6-3 ATS. They are 7-2 to the over, including the most recent game, which was a 102-95 win in overtime over Iowa. It was their fifth straight game over the total.

The Golden Gophers do not have data points against teams like Duke or Notre Dame like Michigan State does, which could be part of the anti-Gopher sentiment in the betting markets. Michigan State’s strength of schedule is ranked 69th by Torvik, but Minnesota’s comes in at 91st to this point. It could also be a fade of Minnesota’s most recent performance. The Gophers had 1.326 points per possession against Iowa. They only did better against UMKC. Defensively, Minnesota had its worst performance of the season with 1.235 PPP allowed.

After forcing turnovers at a high rate against Green Bay and Loyola Marymount, Minnesota has only exceeded a TO% over 20% twice. Like Michigan State, they don’t force enough turnovers, though they are better at it than Sparty. The Gophers have also had major issues on the defensive glass in the last couple of games, including a really nice win over Saint Louis.

Minnesota doesn’t have the problem of too much depth. While a lot of guys have gotten some minutes, Marcus Carr has played nearly 88% of the available minutes, while fellow juniors Both Gach and Gabe Kalscheur are also up over 70%.

The Sparty love is a little bit surprising here, as there is clearly a disconnect with Tom Izzo’s team. One possible explanation is that Michigan State is shooting nearly 37% from 3 and Minnesota is below 32%. In a game that would appear to show minimal defensive resistance based on the total, Michigan State’s offense could rule the day. After all, unless Minnesota shoots well from 3, they haven’t made more than 16 two-pointers in the last four games.

I’d expect this one to be played at a bit of a slower pace than what most of the games for these two teams have seen, so I do like the under 155.5 and I prefer that to a side in this game, though the lean is Michigan State.