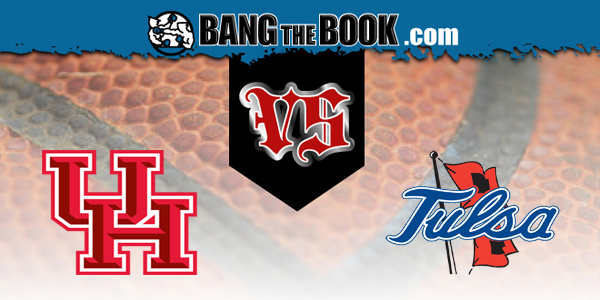 A big battle in the AAC takes place on Tuesday night between Houston and Tulsa. The Cougars look to be one of the top teams in the country this season, but they have not been tested a whole lot on the young year. We’ll see if their second true road game brings some challenges in this matchup against the Golden Hurricane.

Houston is favored by eight points with a total of 126.5 at BetOnline Sportsbook. The side has inched up a little, while the total has come down a couple of points from the opener of 128.5. You can catch the underdogs at +280 on the money line or lay a juicy favorite price at -350.

Let’s take a look at this one and see what we can find for a side or total play.

Kelvin Sampson’s team is off to a 7-0 start that includes a win over Texas Tech and a win over a common opponent in South Carolina. To this point, though, Houston only has that one Quadrant 1 win and a couple of Quad 2 wins over Boise State at home and UCF on the road. Little road trips such as this are certainly interesting this season, as players are mostly confined to their rooms on the road and aren’t able to let off much steam because of COVID protocols.

The Cougars have won all but one of their seven games by 10 points, but are still only 5-2 against the spread. The first game against Lamar wound up not being posted across the market, but if it was at your sportsbook of choice, they covered with a 44-point win, so we’ll count that one, too.

Offensively, Houston has not shot the ball well. They are below 32% from distance and sit at just 48.2% on two-point shots. They are, however, at nearly 75% from the free throw line and rank sixth in the nation in OReb% at 40.1%. Second-chance points have assisted the offense tremendously, as they are shooting 64% near the rim. They are only shooting 35% on long twos and 31.9% from 3.

In other words, Houston has to be able to get to the rim and also get back a high percentage of misses to have offensive success. The Cougars struggled to do both against UCF last time out and were forced to win with defense, holding UCF to .853 points per possession.

The defense has been a great fallback this season. No opponent has managed more than .952 PPP and Texas Tech was even held to .801 in the 64-53 win. Houston fouls a lot, but opponents have not taken advantage, shooting just 63% from the free throw line. They could see some regression in that department that could be hurtful in terms of covering spreads. Houston’s free throw rate against ranks 326th in the nation per Bart Torvik.

Tulsa is one up and one down in conference play. The win was a good one on the road at Memphis, as Tulsa held the Tigers to .709 points per possession. Tulsa has also had a couple of really poor defensively performances in losses to TCU and Wichita State with 1.103 and 1.095 PPP allowed in those two games.

This is a Tulsa team that has been a bit inconsistent thus far. They had good offensive performances in the losses to TCU and Wichita State, but have also had some real clunkers. Defensively, they had the outlier performance against Memphis, but otherwise have been up and down.

You would expect to see that with a young team, but upperclassmen play the majority of the minutes. Sophomore Keyshawn Embery-Simpson plays about 60% of the minutes as a transfer from Arkansas, but he’s 26% from three and 8-of-17 from the line. The smart thing for Tulsa would be to get senior Darien Jackson in the offense more. He’s 19-of-25 on twos, but his usage rate is below 15%. He was a 59% shooter on twos last season.

The low-scoring expectation makes sense here, as these two teams are among the slowest in tempo in the nation. However, there could be a lot of free throws in this game. AAC officials seem to be pretty whistle-happy and both teams have some regression signs in that department. Tulsa should get better at shooting them and their opponents should also get better at shooting them.

Houston’s opponents won’t keep shooting as poorly as they have. Tulsa has had some issues on the defensive rebounding end, which could lead to some easy buckets for the Cougars.

I’ll go against the grain and look for an over here, as Houston’s defense should be in line for a bit of regression and this profiles as a game with a lot of free throws.