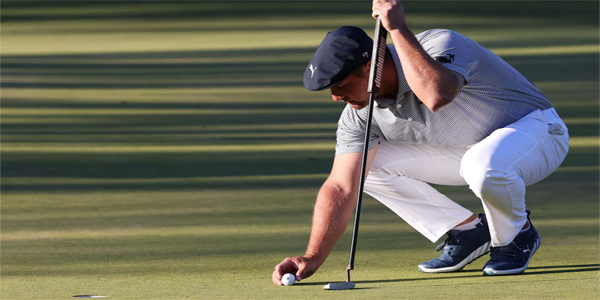 Is Bryson DeChambeau the future of golf?

When BetOnline customers see a performance like the one he put on at the U.S. Open, they have to start asking that question.

At one of the toughest courses in the country (Winged Foot), he shot four rounds in the 60s. Trailing by two beginning the final round, he won by six. And he wasn’t “killing the clock” either, opting to aggressively go after it down the stretch.

I can appreciate this emergence of DeChambeau because he is a very intriguing story, and to me, creates additional interest in the game.

Of course, DeChambeau hardly came out of nowhere. He has won the NCAA title and the U.S. Amateur – in the same year – and even before he decided to re-make his physique he had achieved a world ranking of #5.

That wasn’t enough. When he saw people in Vegas last year he told them he’d be looking like a different person, and boy, did he.

DeChambeau put on somewhere between 35-40 pounds of muscle, and it was purposeful, as he went from 34th on tour in driving distance to first. It really is shocking how different he looked. And one can understand that there was some skepticism on the part of other players.

They test for PED’s in golf, but you can sense that not everybody is a believer. And let’s face it; when you see an athlete with a “before and after” like that, it is naturally going to bring up some questions.

I’m not sure how much of that involves other players just “hating” on him. Some of them weren’t believers even before this “transformation.”

But I am fascinated nonetheless.

I think I’m always fascinated by people who are taking a more scientific, sophisticated approach. And you can draw a rough analogy with this and the advent of analytics in baseball, where the implementation of it gave teams like the Oakland A’s edge.

As you may know, DeChambeau,a physics major at SMU, is a devotee of a book called “The Golfing Machine,” written by someone named Homer Kelley, who wasn’t even a pro golfer, and was treated accordingly by the so-called golf establishment when it was published back in 1969. Nonetheless, it developed a cult following.

What kind of surprises me is that although there are quite a few teaching pros who are certified by the company Kelley founded and instruct pupils on the “single-plane” golf swing, not a lot of touring pros use it. Steve Elkington, a former PGA champion, comes to mind, but the practitioners are few and far between. Generally, they don’t believe. And DeChambeau was told that his approach wouldn’t work on the tougher courses.

And will it work again? Here are the odds on some of the top contenders in the Masters, taking place from November 12-15, as they are posted at BetOnline. As you can see, the subject of our piece is the co-favorite.

Some guys take blades of grass and toss them in the air to see which way the wind is blowing, here’s a guy who’s measuring things like current air density and factoring that into how far he is going to hit his shot.

And it doesn’t hurt if you can massacre the ball either. DeChambeau’s philosophy is that the longer you can hit it, the better chance you’re going to have.

Doesn’t any of this sound pertinent to the present conversation?

Incredibly, DeChambeau hit just 23 out of 56 fairways on the week. That’s 41%, and usually that would be fatal for anyone playing a U.S. Open, let alone at a course like Winged Foot.

So for his next major he’ll be headed to Augusta, where it really pays to be long, and the fairways are very wide, with the rough not nearly as much of a factor as it is at other world-class courses. In other words, to the extent DeChambeau was penalized at all for errant drives at Winged Foot, he’ll be penalized even less in the Masters.

So he’s doing the logical thing. The scientific thing.

He’s making himself even bigger. Or at least that’s his intention.

He intends to arrive at Augusta National anywhere from 10-15 pounds heavier than he is right now. He will do it by gaining about a quarter-pound a day. I’m confident he’ll be as precise as possible in doing that.

I don’t know either. But I think it’s going to be quite an interesting story line – right up there with Tiger Woods defending his title (yeah, it’s been a while, but he’s the last Masters winner). Oh, and the fact that there are probably a lot of players who still don’t think his bulking up is “legit” and will be rooting against him.

Yeah, I get some of that too. DeChambeau does seem to come off as a bit of an arrogant prima donna.

At BetOnline, you can find futures odds on all major golf events, including the Masters and even next year’s PGA and U.S. Open!…….. Don’t forget that Odds Booster gives you a chance for greatly enhanced payouts on pre-selected parlays, and that there are always promotions going on in the poker room, including the $2.5 Million Championship Online Poker Series…….. You can use any method imaginable to open an account; if you use the digital currency of Bitcoin you can get a 5% BOOST over and above the value of that deposit. Make sure you act now on that!