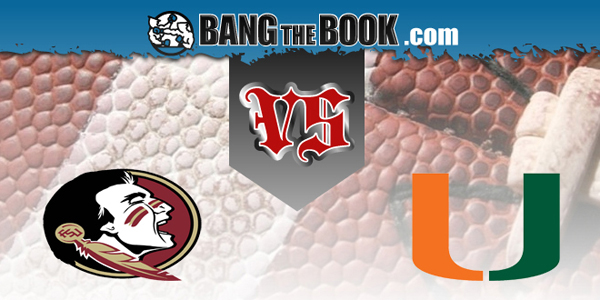 The offensive moves made by the Miami Hurricanes appear to be having their effect. And while coordinator Rhett Lashlee may not be enough of a “guru” yet to put himself into Joe Brady territory, he is nonetheless injecting a lot of life into an offense that was depressing last year. The ‘Canes carry a lot of momentum into Saturday’s traditional rivalry game against the Florida State Seminoles, and BetOnline customers can watch it at 7:30 PM ET.

It was considered a major challenge as the Hurricanes barreled into Louisville last weekend, and they showed that with a little more time on the practice field, they could be much more formidable playing in Lashlee’s spread offense.

The much-ballyhooed trigger man, D’Eriq King, looked more comfortable behind center than he did in the opener against UAB, and he threw for 325 yards and three touchdowns. Tight end Brevin Jordan, one of the nation’s best, went virtually unchecked as he caught seven passes for 120 yards, including a 47-yard TD.

Miami won it 47-34 behind 485 yards, but they also gave up 516 yards to the Cardinals. One can make the argument, however, that Florida State doesn’t come to the table with a leader who is quite so dynamic as Micale Cunningham.

It is worth mentioning, since the history of this series is defined by missed field goals that made the difference in games, that Miami has a genuine weapon in placekicker Jose Borregales, who helped beat them a year ago with two field goals of 50+ yards for FIU, but, after transferring, booted four FG’s against Louisville, including a 57-yarder.

In the college football betting odds that have been posted on this game by the folks at BetOnline, the ‘Canes are favored by double digits:

Remember that you can get greatly enhanced payouts on pre-selected parlays with Odds Booster, every day of the week!

There was some question as to how quickly the Seminoles might adapt to new coach Mike Norvell’s offensive system, especially without the benefit of spring practice. Questions surrounded James Blackman’s ability to carry the team forward behind center. Well, in the opening game Blackman threw the ball 43 times for 198 yards. That’s less than five yards per attempt. With an offensive line that has had its troubles (allowed 48 sacks last year), Blackman usually has to get rid of the bail in a hurry.

Miami will bring pressure; you can be certain of that. When you look at Gregory Rousseau and Quincy Roche coming from either side, you’re talking about two guys who are both in the top ten of some mock drafts. And those weren’t even the guys who scored sacks against Louisville. Zach McCloud, a linebacker who redshirted last year, had a sack among his nine tackles, along with a forced fumble and a recovered fumble. So you ought to see more defense out of Miami than you did last week.

That stop unit was very much on display in last year’s meeting, as the ‘Canes held Cam Akers, a highly-regarded running back who went in Round 2 to the L.A. Rams, to less than three yards a carry en route to a 27-10 win. And that marked the end of Willie Taggart’s tenure, as he was ushered out of the state capitol (he has landed a little downstate in Boca Raton, as coach at Florida Atlantic).

One of the big stories coming out of Tallahassee is that Norvell, Taggart’s eventual successor, can not be with the team because he has tested positive for the coronavirus. He is doing a lot of work remotely, but can not be with his team. The “deputy coach,” Chris Thomsen, will assume the head role. He’s done that once in a bowl game for Texas Tech, and he’s been head coach at Abilene Christian.

You don’t want to lose sight of the fact that Florida State did bring back nine starters on defense this season, and that they have had an extra week to get ready for this opponent. Can you imagine the intensity level will be low? Consider also that prior to last season, they’d played five straight games with margins of five points or less.

These factors, along with FSU’s offensive troubles, have us looking in the direction of the UNDER for this one.

BetOnline keeps you right on top of all the college football action, with lots of options, including some nice props for the game, along with creative futures you’ll enjoy…… Odds Booster adds to the fun with tremendous payouts on pre-selected parlays, so check that out……. You can deposit in all kinds of ways, including Bitcoin, and if that’s what you’re going to use, you can get a 5% boost over and above that BTC value in your deposit!