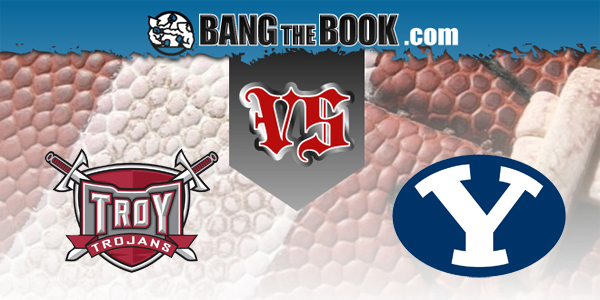 The BYU Cougars really laid it on Navy in the season opener, and it got some talk going that they might actually be able to go undefeated and advance to the college football playoff. Some things have changed since then, namely the SEC’s entry into the fray, and they had to postpone last week’s game. But they still come into the weekend ranked 18th by the Associated Press as they play host to the Troy Trojans of the Sun Belt Conference.

Game time is 10:15 PM ET at Lavell Edwards Stadium in Provo, and if you are a BetAnySports customer, you’ll be able to get reduced juice on this game, not to mention the opportunity for real-time betting during the festivities through Sports Betting Prime.

BYU began its season with a resounding 55-3 win over Navy – a game that was arranged without a lot of advance notice because of holes in the two teams’ schedules. They had a game slated against Army last week, and that could have been of some added significance because of the Cadets’ #22 national ranking, but that was postponed because of a number of COVID-19 cases that broke out on campus. Things are so crazy that they are still having discussions about playing Boise State this season.

Troy has played once – last week against Middle Tennessee State, who they rolled over by a 47-14 score. So while they are into a regular routine, BYU will not have played a game in 19 days.

In the college football odds that have been posted on this game at BetAnySports, BYU is laying more than two touchdowns:

So was BYU as awesome as it looked against the Midshipmen? That question bears asking; after all, they had a 580-149 yardage edge, a 28-7 advantage in first downs, and held Navy’s rushing attack, one of the most formidable in the nation last year, to just 119 yards. But to be honest, Navy had not done any contact drills to that point, with coronavirus concerns on campus, and they had not really resolved the quarterback situation. Perry Olsen announced intentions to transfer after the game, indicating that he was unhappy that Dalen Morris had been chosen over him as the QB starter.

When it comes to scheduling quirks, this one brought some real changes to BYU, which had previously found itself preparing for option attacks in back-to-back weeks from the service academies, but has not had some extra time to get ready for the spread offense of Troy, which was extremely effective against MTSU, with 496 total yards. What you can say about the Trojans is that they are balanced; QB Gunnar Watson had a very solid game last weekend, with 248 yards, and Troy had 240 yards on the ground as well.

Linebacker Chaz Ah You has been declared out for the season because he has elected to have a surgical procedure now rather than wait until the end of the season. He joins tight end Matt Bushman on the sidelines, along with reserve running backs Hinckley Ropati and Jackson McChesney. So some of the depth in the backfield has been cut into. Also, Sione Finau, the leading returning rusher from a year ago, is still in a recovery period from an ACL injury, and he is an iffy proposition.

And that could mean something. We think Zach Wilson needs balance in the attack to operate at a high level. He has a very accomplished offensive line, but Troy has most likely made some strides on defense, adding some Power 5 transfers, with an unlikely anchor in the middle linebacker spot. We don’t know if Carlton Martial will be converted to safety for his NFL opportunity, but at the moment he is a 5-10 ball of fire who is all over the field and was recognized with pre-season All-America status. He’s the playmaker BYU has to watch for.

Troy is more “together” on both sides than Navy was a few weeks ago. It would not surprise us if this one was tight all the way. We’re taking points with TROY.

BetAnySports afford you a lot better deal with reduced juice, and you can place wagers in real-time during the game through the magic of Sports Betting Prime……. They’ve cleared the way for lots of deposit methods – including your debit or credit card, person-to-person transfers and the virtual currency of Bitcoin, which is fast and easy with their automated system, and NEVER incurs a transaction fee!