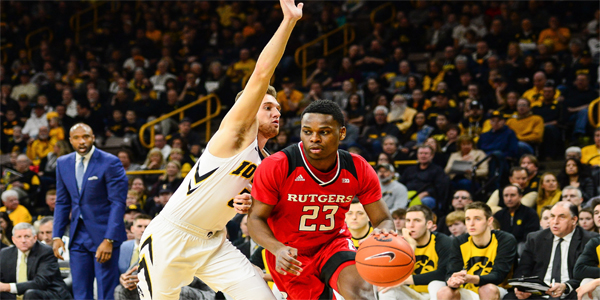 Might we remind you that the Rutgers Scarlet Knights made it to the NCAA Tournament (and the Final Four) undefeated in 1976, the same year Indiana went through the whole thing without a scratch and made history. Now, with Gonzaga unbeaten and ready to become the first team since then to be spotless and win a national title, can Rutgers get heroic again?

The Scarlet Knights had not won in the NCAA tourney since 1983, before turning back Clemson in the first round. But that was a very bumpy ride, and things only get more difficult as they face the Houston Cougars, who had a bit of a cruise against Cleveland State in what was Kelvin Sampson’s return to Indiana’s Assembly Hall.

This time the teams gather at Lucas Oil Stadium in a game that begins at 7:10 PM ET in TBS. BetAnySports customers get to participate in real-time wagering while they watch, through Sports Betting Prime.

Sampson, as you may know, was embroiled in recruiting violations at Indiana, and he was hit with a five-year “show cause penalty” by the NCAA. We’d say he has come back with a flourish.

And he did it while Caleb Mills, who was the leading returning scorer for this team, opted out of the rest of the season after just four games. No worries; Quentin Grimes has taken things over and had an All-America season.

You really have to commend Rutgers in general; there were plenty of observers who questioned why they would join the Big Ten. But after hiring Greg Schiano,the football team has become very competitive. And Steve Pikiell, who had previously been to the Big Dance with Stony Brook, is in the process of turning the hoops squad around.

Yes, they finished 11-11 in the Big Ten, but that is the toughest conference in the nation. Rutgers posted wins over plenty of capable opponents, beating the likes of Illinois, Maryland and Purdue, and they deserved their bid. They have some impressive bulk up front with Myles Johnson and Ron Harper Jr., but they are not a big threat from the outside, and the last thing you want to do against this Houston team is be one-dimensional.

The Cougars strangle opponents; they are #1 in the nation in Effective Field Goal Percentage defense (43%). They are ranked fourth in the nation defending two-pointers (42.9%), ninth against three-pointers (28.8%). They send teams to the line more than most, but they send the right people,as foes have made just 65% of their free throws. And for a team without anyone bigger than 6-8 in the rotation, they block quite a few shots.

These are not dead-eye shooters on this Houston team. But Rutgers needs to be ready to defend the defensive boards, as the Cougars are second best in the country in Offensive Rebounding Percentage, with almost a 40% success rate.

We should probably mention that Rutgers has suffered six of its losses by double digits, so they’ve had breakdowns. And Houston is fully capable of bringing that kind of thing on. Lay it.