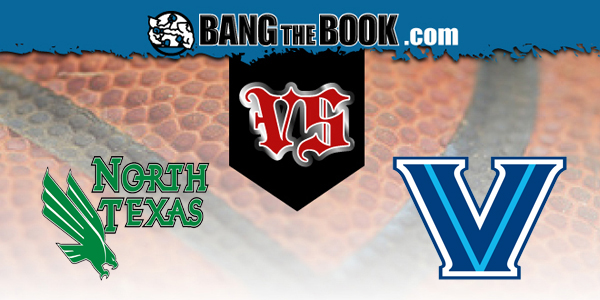 Saturday provided plenty of drama and we’ll have some very intriguing games on Monday as a result, but we’ve got second round action on Sunday to get through first and a lot of good games on the docket. One such matchup will be the game between North Texas and Villanova in the South Region.

It is interesting, isn’t it, that Villanova beat Winthrop and North Texas beat Purdue in overtime and this line is smaller than Purdue’s number against UNT in that first round game. Are we sure that Villanova is an underdog on a neutral to Purdue? Is it because of the Collin Gillespie injury or something else?

Regardless of the reason(s), Villanova is -6 at Bookmaker Sportsbook with a total of 126.5 in what is expected to be a low-scoring affair.

Grant McCasland outcoached Matt Painter. The Mean Green won four games in four days in the Conference USA Tournament to get in and then rode that wave to a 78-69 win over Purdue in Saturday’s first-round action. The Boilermakers had 20 offensive rebounds to just eight for North Texas, but failed to capitalize on enough of those chances to win.

North Texas may not withstand another big disparity on the glass like that, but it is far less of a worry in this one taking on Villanova. The Wildcats are not a great offensive rebounding team anyway. Will that help North Texas’s hopes of advancing? It certainly could, especially if they are able to hold the Wildcats to 36% from the floor like they did the Boilermakers.

One concern for UNT here is that they scored 1.175 points per possession against Purdue and it’s not like there were a ton of free throws in the game, despite the overtime period and how games get extended at this time of the year. North Texas didn’t have many offensive performances like that in league play or in the conference tournament, scoring just .898 PPP against LA Tech and .944 against Western Kentucky in the title game. That game was 48-48 going to overtime.

Another concern for UNT is that Villanova is second in the nation in TO%. Forcing turnovers was a big part of the Mean Green’s success with a TO% that ranks 55th in the nation at 21.2%. That means they’ll have to rely heavily on a defense that held the opposition to 44.7% from the floor over these first 27 games. Opponents are also only shooting 31.5% on threes.

North Texas has the defensive prowess to not only hang around, but possibly win another gritty type of game. You just wonder if this team offensively can take advantage of what is a weaker Villanova defense than we’ve seen in past years.

I hammered this point on ATS Radio and in other previews for March Madness, but a lot of people were ready to discard Villanova after the loss in the Big East Tournament to eventual winner Georgetown. Given the Hoyas’ performance against Colorado, I guess you can see why. However, the Hoyas were 23-for-23 from the line in that game and won by a point. Villanova did nothing wrong in that game really except for that.

Life without Collin Gillespie wouldn’t be easy, but Jay Wright had Jeremiah Robinson-Earl, Jermaine Samuels, and Justin Moore to rely on in his absence. Robinson-Earl was the star in the Winthrop win with 22 points and 11 rebounds to lead four Wildcats in double figures. Wright figured it out, as good coaches do.

Winthrop, though, was not a great defensive team. The Eagles were fine, but a weak strength of schedule and some mediocre shooting stats against gave Villanova a real good chance and one that they did in fact take advantage of in Friday’s game. This will be a much stiffer defensive test for the ‘Cats.

Like I mentioned, Villanova takes tremendous care of the basketball. They’re also 55th in 2P% at 52.9% and 104th in 3P% at 35.1%. Villanova won’t get the extra possessions that Purdue got on the offensive glass, so the Wildcats will need to make shots. Will they make enough of them in Gillespie’s absence here?

Perhaps a bigger question, as the spread sits at 6, which is right in late-game fouling range, will the Wildcats be able to salt away the game without Gillespie, who led the team with an 83.3% success rate at the line.

This should be a lower-scoring game with two teams that rank in the bottom 40 in adjusted tempo and a North Texas team that plays tenacious defense. On the other hand, Villanova ranks 246th in 3P% against and 201st in 2P% against, so North Texas has the chance to make some shots here.

Add in the potential for some late-game fouling and two teams that shoot the three pretty well and I’m looking at the over. Bankers Life Fieldhouse has actually been the best of the venues to the under to this point, but that seems like small sample size noise more than anything.