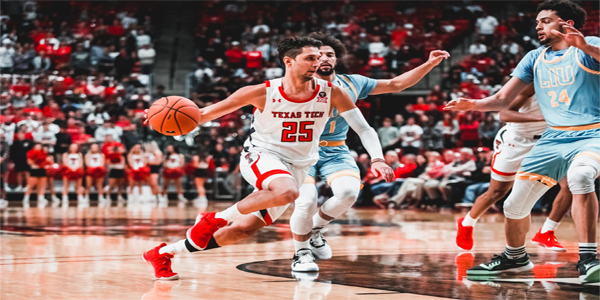 Is it possible that Texas Tech can make another journey toward the Final Four? The Red Raiders are clearly executing the game plan of head coach Chris Beard, but do they have the players to make it happen?

They’ll get a huge test on Sunday out of the Arkansas Razorbacks, who had their hands full in their opening game against Colgate but survived to continue.

This game tips off at 6:10 PM ET at the Hinkle Fieldhouse in Indianapolis. TNT will show the game live, and good things await the customers at BetAnySports, who can get reduced juice, as well as real-time wagering through Sports Betting Prime.

It’s interesting that both of these coaches – Chris Beard of Texas Tech (a former Hoosier assistant under Bob Knight) and Eric Musselman of Arkansas – are being mentioned as potential candidates for the head coaching job at Indiana, which is vacant after Archie Miller’s firing.

Arkansas allowed Colgate, one of the top scoring teams in the nation, to get off to a lead,and needed runs of 19-0 (spread between late first half and early second half) and 15-2 in order to create some distance. They were able to force 22 turnovers on the part of Colgate, which helped. And they got 29 points and thirteen rebounds out of 6-7 Justin Smith, who transferred from Indiana.

So now they play a “Red Raider” team for the second time in a row. But this one will be considerably tougher on the defensive end. Beard knows how to take a team out of its game plan. And with Arkansas that will involve making them pass the ball more than they would like to. The Hogs like to get rid of the ball quickly, so if Texas Tech can create more of a “grind,” they could get the upper hand.

They have the capability to do that. But what they have to do is balance that with getting Arkansas to make mistakes, as forcing turnovers can have a tendency to accelerate the pace.

It is very hard to get inside and get baskets against these guys, because they close off lanes of penetration. Arkansas may be able to find an opening being the superb frosh, Moses Moody, who has been 37% accurate from three-point range.

But this is a tough slog for Arkansas, because they have to deal with a Red Raider squad that is going to get a lot of the “hustle points,” simply through the way they ferociously attack the offensive glass and draw fouls. Marcus Santos-Silva is one of the better offensive rebounders in the country, and it’s been that way going back to his days at VCU.

Certainly Arkansas is a strong program. But you know, this is nothing more challenging than what Texas Tech has encountered during the season, as they navigated their way around the uber-competitive Big 12. And let’s not forget that Beard has shown a penchant for making second half adjustments in this event. Utah State had only four triples in Friday’s 65-53 Red Raider win; this will be more difficult, but if anyone can control the tempo here, it’s Beard’s crew. So we will lay the small number.