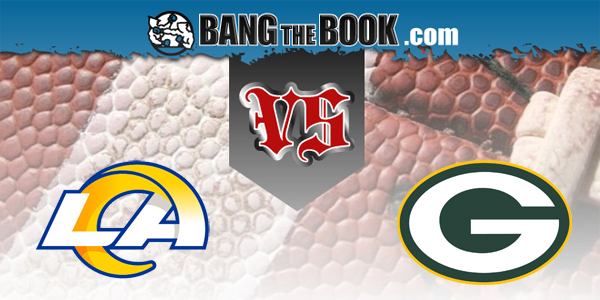 The Los Angeles Rams nearly ran for more yards than they passed for, but some short fields and top-notch defense were enough to advance to the Divisional Round to take on the Green Bay Packers. The Packers spent last week wondering who they would face coming out of the only bye week in the NFC.

The matchup will be the first Divisional Round game in the 4:30 p.m. ET window on Saturday January 16. Green Bay is favored by 6.5 or 7 depending on the sportsbook with a total of 45.5 painted just about across the board. We’ll go with Bookmaker’s -6.5 and -117 as of time of writing.

The Rams went over the total last week in the 30-20 win for just their fifth over of the season in 17 games. Green Bay is 9-6-1, give or take, depending on the number you cite for the game against Houston. Los Angeles is 10-7 and the Packers are 10-6 ATS, so we have two teams that have been fairly kind to bettors.

The Rams are going to need a lot more on offense this week. Jared Goff, who was questionable following thumb surgery, was pressed into action when John Wolford was taken from the stadium on a stretcher with a possible neck injury. Wolford returned by the end of the game, but his status is very much in doubt this week.

Goff was 9-of-19 passing for 155 yards. It was the Cam Akers show for the Rams, who scored 30 points despite just 4.7 yards per play. Akers had 131 yards and a touchdown on the ground. Short fields really had a big impact on the game, as there were scoring drives of 19, 22, 7, and 36 yards during the contest. It was a pretty misleading over, as the teams had 4.7 and 4.9 yards per play, respectively.

The Rams will need to win with defense again in all likelihood. The offense managed just 16 first downs and was only 3-of-15 on third down to go with 0-for-2 on fourth down. Russell Wilson was sacked five times and the Rams only allowed Seattle to enter the red zone one time. Darious Williams had a pick six on the game’s only turnover.

Aaron Donald is questionable with a rib injury for the Rams. Donald had two sacks and Leonard Floyd also had two in the victory. We’ll have to wait and see if Donald will be able to go against the Packers.

Green Bay is coming off of a bye, which is a bit concerning in some ways, but teams coming off of a bye are 10-5-1 ATS over the last four postseasons, so it hasn’t been a major negative. The Packers simply got a week to readjust their protections after David Bakhtiari tore his ACL in practice prior to Week 17 and to let other players with bumps and bruises get healthy.

NFL MVP Aaron Rodgers posted a 48/5 TD/INT ratio with a 70.7% completion percentage. Rodgers was pretty upset and Packers fans were pretty miffed when Jordan Love was taken with the team’s first-round pick. The 37-year-old Rodgers proceeded to have arguably the best season of his career. He was only sacked 20 times, as LaFleur adjusted some protections and play calling and it all worked out for the best.

Davante Adams had a huge year with 115 catches for 1,374 yards and he even missed two games. Tight end Robert Tonyan was a huge red zone option with 11 receiving scores. Aaron Jones quietly ran for 5.5 yards per carry. This was a really efficient Green Bay offense.

Questions about the defense are fair, but Green Bay had a top-10 red zone defense and opponents scored on fewer than 40% of their possessions, even though the Packers only had 18 takeaways. Green Bay did struggle at times to stop the run, but played from in front so much that opponents couldn’t run the ball much.

Initially, my lean was the Rams because of that factor, but with the expectation that the Packers lead the game at half, I’d have to lean Packers.

What I do like is Packers -3.5 for the first half. They’ve been a great first half team this season and should take a lead into the intermission.