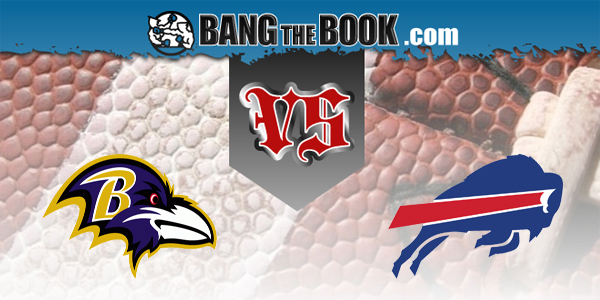 Now the two teams face each other at New Era Field in Buffalo in the Divisional Round. The odds at Bovada Sportsbook say that Buffalo is -2 with a total of 50. In what looks like the best and most interesting playoff game in this round, early money was on Baltimore, but we’ve seen this line sway back and forth after the initial move down.

The Bills failed to cover the spread last week for the first time since November 1. The Ravens covered their seventh straight spread to improve to essentially 12-5 on the season, unless you got the worst of the Washington number in Week 4.

The Ravens and Titans game was not really what we expected it to be. It ended 20-13, as the Ravens fell behind by 10 early and gave up a 25-yard field goal in the fourth quarter. Tennessee was held to 209 yards. The Ravens had 401 yards and 6.3 yards per play, but only mustered 20 points. Justin Tucker missed a field goal and the Ravens only scored one touchdown in three red zone trips.

The legs of Jackson were the difference, as he amassed 136 yards on 16 carries. It was not a good day throwing the football, as he was 17-of-24 for 179 yards and an interception. He was also sacked five times. But his legs and 6.7 yards per carry as a team were enough to push Baltimore into the second round.

Baltimore’s defense was the star of the show, holding the vaunted Titans offense to just 4.3 yards per play. Derrick Henry found no running room with 18 carries for 40 yards and a long of just eight yards. Ryan Tannehill was 18-of-26, as the Titans only ran 49 offensive plays to Baltimore’s 64.

We’ll see if Baltimore has similar success here against the Bills. Many would have said that Tennessee had the best offense in the AFC prior to that game. The ones that wouldn’t would either say Buffalo or Kansas City. If the Ravens are to go to Super Bowl LV, it would mean beating all three of those teams in all likelihood. Step one was a resounding success, as the Ravens got double revenge for last year’s playoff exit and this year’s disrespect.

On the other hand, the Bills lost the field position battle most of the game. They started one drive out past their own 25-yard-line and it was their own 28. Josh Allen was 26-of-35 for 324 yards with two touchdowns and also was the team’s leading rusher with 11 carries for 54 yards. It was a huge playoff display from Allen and the Bills needed every one of those yards.

Stefon Diggs had six grabs for 128 yards and Allen effectively spread the ball around, even without much work for John Brown, who failed to haul in any of his four targets. The Bills were third behind the Packers and Titans in points per drive, so the Ravens defense will be under pressure once again. One key difference between the Bills and those two offenses is that Buffalo had more turnovers, so they gave up more chances to score.

The Bills defense is hard to gauge. They had the third-most takeaways, which could be a factor with Jackson’s poor passing ability. They also allowed 5.5 yards per play, which was around the middle of the pack, but injuries and COVID played a big part for the Bills throughout the season. Every team can make that claim to some degree, but it did help opponents rush for 4.6 yards per carry.

That will be the focal point for the Bills. They have to stop the run and they have to spy Jackson. Another point of emphasis here in this game is that the Bills throw it far better than they run it, so we’ll see how the Ravens hold up in coverage. They held up quite well against the Titans.

One angle I’m looking at and I believe it would lead me to the Bills is that the Ravens put a lot into last week’s game. Now they’re on a short week coming off of a game that meant a ton to them emotionally. The Bills? Well, all the pressure was on them last week to snap the long playoff drought. There should be a different mindset this week.

I’ll take Buffalo here -2 and lean over the total. The Bills were really hampered by bad field position and still scored 27 points on the Colts, who have a solid defense.