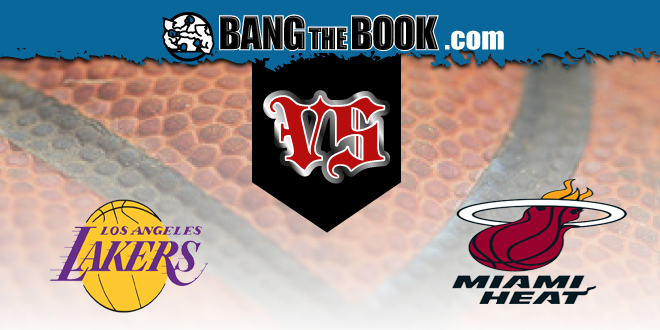 Get ready for Game 6 of the 2020 NBA Finals, as the Los Angeles Lakers and Miami Heat will face off against each other on Sunday, October 11.

Although the Lakers opened the series with a couple of wins while dominating their rivals on both sides of the ball, the Heat fought bravely over the previous three encounters and pulled off a couple of upsets.

Miami is still on the verge of elimination, so we’ll see another dramatic clash Sunday in the NBA bubble. The NBA Playoffs betting continues, so we bring you the best betting pick for the Lakers versus Heat showdown along with the most important betting tips and notes.

According to BetDSI, the Lakers are 5-point favorites in this one, while their moneyline odds sit at -200. The Heat are listed as +180 moneyline dogs with a total of 214.5 points on BetOnline.

The Lakers are coming in full strength, though Anthony Davis suffered a minor heel injury in Game 5. The Heat are still missing Goran Dragic (foot), and the veteran point guard should remain on the sidelines for the rest of the series.

The Lakers blew their first chance to win their 17th title in franchise history last Friday, losing 111-108 to the Heat in Game 5 of the 2020 NBA Finals.

On the other side, Miami wants to become the second team in NBA history to overcome a 3-1 deficit in the finals. That would bring them their fourth championship and first since 2013 when LeBron James led the Heat.

This time, LeBron is leading the way for the Lakers, but he didn’t take the last shot in Game 5. Instead, he assisted Danny Green who missed the open 3-pointer, and the Heat somehow escaped with the victory.

I thought the Lakers had the momentum on their side. Now, it seems like we’ll get another nail-biting finish Sunday. This Miami team just refuses to go away.

The Heat used only seven guys in their rotation last time out, and Jimmy Butler played all but 38 seconds to finish the game with 35 points, 12 boards, and 11 assists. That was his second triple-double in the 2020 NBA Finals after posting 40 points, 11 rebounds, and 13 dimes in a 115-104 victory in Game 3.

Furthermore, Butler had five steals, and his presence on the defensive end was essential for Miami, although LeBron James scored 40 points on 15-for-21 shooting from the field.

Anthony Davis had 28 points and 12 boards, while Kentavious Caldwell-Pope added 16 points, but the Lakers’ second unit shot 5-for-22 from the field for 14 points. On the other side, Kendrick Nunn scored 14 points off the bench on his own.

The Heat made 42.4% of their 3-pointers which was another important factor, and Duncan Robinson finally found his mojo, finishing the game with 26 points and seven triples.

If they want to tie the series, the Heat desperately need to continue making treys. The Lakers have more firepower at the low post, dominating the Heat on the glass in this series while scoring a lot of easy baskets in the paint.

I would be surprised if we don’t get another dramatic clash all the way to the end. Therefore, I’m backing the Heat to cover a 7-point spread at -150 odds, although I think the Lakers will finish the job in six games.

Miami has dropped nine of its last 12 games against the Lakers, but the Heat are 5-1 ATS in their previous six matchups with Los Angeles. With so much on the table for both sides, I expect to see a tight battle down the stretch. The Lakers are an experienced team, but even if they win, it won’t be an easy task.