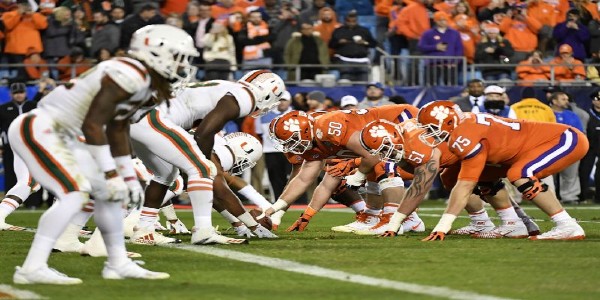 There was some fanfare when Rhett Lashlee arrived as offensive coordinator for the Miami Hurricanes, and especially when D’Eriq King elected to come over from Houston. King is a genuine college quarterback, something the ‘Canes hadn’t really had a lot of in recent years.

And so far the team has justified the excitement, with an undefeated record (albeit in only three games) and the #7 spot in the Associated Press poll. But are they ready for the #1 team? That’s the assignment on Saturday, as they suit up against the Clemson Tigers (7:30 PM ET).

Admittedly, Miami has not faced top ten-caliber opponents, although Louisville, an ACC squad, is credible. But the 52-10 win over Florida State was not against, well, the kind of FSU teams we are used to seeing. So there are, justifiably, questions that must be raised.

But no one can doubt that King is legit, and perhaps even a Heisman Trophy candidate, depending on what happens in this game. When he was at Houston in 2018 he was responsible for 50 touchdowns – 36 through the air and 14 on the ground. This season, for what it’s worth, he is 15th in the nation in passing efficiency and 17th in passing yards.

King may remind some people of Lamar Jackson, but he is really not a classic pro prospect at quarterback, in the respect that he’s not even 5-10. By contrast, Trevor Lawrence of Clemson seems to have everything the pro scouts are looking for, including the size (6-6). And until he blows a gasket, he is the clear favorite to win the Heisman.

This game is being played at Clemson, but the Miami Dolphins may be watching this one closely. You see, they hold the Houston Texans’ first round draft pick, and if the Texans completely fold up (they are 0-4 now), they might have an interesting choice as to whether to pick a guy like Lawrence (who is expected to come out of school early) and trade Tua Tagovailoa, or trade the pick and get even more picks.

Okay, enough of the speculation. In the NCAA football betting odds posted on this game at BetAnySports, Clemson is favored by more than two touchdowns:

So yes, the question becomes whether the ‘Canes have developed enough in this new offense to where they can move the ball with some consistency against Clemson’s defense.

Between King’s elusiveness and the kind of job the offensive line has been doing, they have a real chance to protect him. Miami has surrendered only three sacks this season. With tight end Brevin Jordan, he’s got a reliable short-range weapon, and not many running backs have more talent than Cam’Ron Davis. Of course, one of those backs, projected to be the first one taken off the board, is Travis Etienne, who is averaging 6.2 yards a carry for Clemson after a 7.8-yard average last season.

So can Miami manufacture a chance for itself? Maybe, but they have to be able to pressure Lawrence. They have the ability to do it, with the likes of Greg Rousseau, Quincy Roche and their colleagues.

Miami has converted 52% of its third down opportunities. That is a lot different than what we have seen out of the ‘Canes in recent seasons. That is one positive change with the Lashlee offense. The Hurricanes will always have athletes; they just don’t have as many of them as Clemson does. They’ll go down swinging, and that makes them a nice candidate for a “back door cover.” So we will take the points.