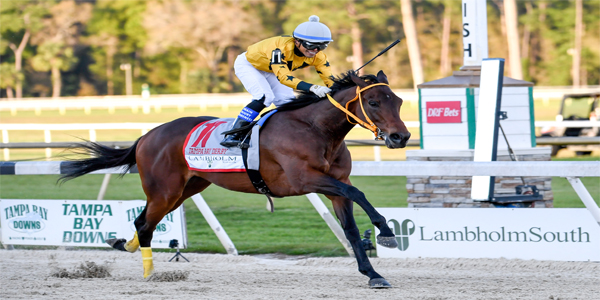 So nice, we’ll do it twice. What was supposed to be Kentucky Derby day is now Arkansas Derby day and 22 three-year-old horses wanted to enter the field, so officials at Oaklawn Park decided that the Arkansas Derby will be run twice.

We took a look at Race 11, where Division 1 favorite Charlatan looks to stay unbeaten, and now we’ll take a look at Race 13. This is Division 2 of the Arkansas Derby and features a 7:43 p.m. ET post time.

The sport’s top three-year-old horses were supposed to be at Churchill Downs on the first Saturday in May, but the Arkansas Derby was moved from April 4 to May 2 and the hope is that some of the canceled events in New York and California can be moved to the summer so that the best horses can be in great form for the Kentucky Derby on September 5.

As we did with the Division 1 preview, we’ll scan through all 11 horses in Division 2 and put together a bet slip in hopes of snagging some cash on Saturday.

Here are the post positions, the horses, trainers, jockeys, and the morning lines from the racing form (post updated to include scratches):

This is a much stronger field than Division 1. King Guillermo, Storm the Court, Nadal, and Wells Bayou all have huge wins to their names on the Road to the Kentucky Derby. King Guillermo was a 49/1 winner at the Tampa Bay Derby. Nadal scored the win in the Rebel Stakes here at Oaklawn Park back on March 14. Wells Bayou won the Louisiana Derby. Storm the Court was the Breeders’ Cup Juvenile champ at 45/1.

Silver Prospector beat out Wells Bayou in the Southwest Stakes and beat out Finnick the Fierce and Tiz the Law in the Kentucky Jockey Club Stakes. None of the horses in the other division have won a stakes race considered to be a Kentucky Derby prep.

Let’s run through the 11 horses and see how we can narrow down the field.

Finnick the Fierce (15/1) draws the inside post for Martin Garcia, who was second on the son of Dialed In back on April 4 on a sloppy track in an allowance optional claiming. It was a step down in class after three straight stakes races that resulted in a seventh, fourth, and second. Technically, Finnick the Fierce won that AlwOC when the favorite was disqualified. The speed figures have been decent, but not on par with the rest of the field.

Saratogian (50/1) has been scratched.

Storm the Court (6/1) provided one of the best horse racing moments of 2019. He won the Breeders’ Cup Juvenile at 45/1 and trainer Peter Eurton was interviewed by his beaming daughter Britney, who covers horse racing for NBC Sports. The lightning in a bottle for Storm the Court has not returned, with a fourth off a long layoff in the San Vicente Stakes and a third in the San Felipe Stakes.

He’ll be off another long layoff here, having not raced since March 7. This looks like a really big ask for the son of Court Vision with the longer distance as more of a pacesetter than a closer.

King Guillermo (3/1) could go down as the best story of 2020. Owners Victor and Victoria Martinez wanted to give the horse one more shot on dirt before turning it into a full-fledged turf horse. Trainer Juan Carlos Avila shook his head, but Samy Camacho grabbed the mount in the Tampa Bay Derby and King Guillermo had a run for the ages for a 102 speed figure and a win by 4 3/4 lengths.

Now we see what the encore looks like. It has been 56 days since King Guillermo has raced, but the workouts have been decent. On a personal level, I’ll be rooting for this one with former Cleveland Indians catcher Victor Martinez cheering on his prized colt, but this is a big ask in a better field. If he simply turned a corner as a three-year-old, lightning could strike twice.

Nadal (5/2) really does look like the horse to beat here. You’ve got the tandem of Bob Baffert and Joel Rosario. You’ve got three wins in three tries as an unraced two-year-old. You’ve got wins on sloppy tracks and firm tracks. You also have two nail-biters in the last two races by 3/4 of a length in the San Vicente and the Rebel.

Nadal went off at 4/5 in the Rebel with the rail post and never had to relinquish the rail. It was a nice and easy ride for Rosario, minus a late challenge on the frontstretch from Excession. We haven’t seen Nadal’s best race yet given the speed figures, but we may very well see it here.

Code Runner (50/1) seems to be a bit of a disappointment at this juncture. The son of Honor Code did win a low-dollar allowance race last time out, but only won its maiden through disqualification in December. Since then, Code Runner has had career-best speed figures and may be turning the corner as a three-year-old for Steve Asmussen, but this isn’t the kind of race to be learning on the job.

Silver Prospector (10/1) looks like a better bet among the two Asmussen horses, but this one still sits at double-digit morning line odds for Ricardo Santana Jr. An impressive win in the Southwest Stakes over Wells Bayou was thought to be a springboard for the Rebel Stakes, but it was not. Silver Prospector was a disappointing sixth in that race to snap a string of five straight races with a speed figure in the 90s.

It could be that Santana and Asmussen are sitting on a big race here. Santana pulled him back quite a bit in the Rebel after sitting just 3/4 of a length back about halfway through. This is a three-year-old that has been raced a ton and has had some good showings along with some duds. It’s hard to know what to expect here.

Taishan (15/1) came in third in the Oaklawn Stakes back on April 11 after setting a career-best speed figure in an optional claiming a month prior. David Cohen draws his first mount after Joel Rosario had the previous two. Taishan has shown the ability to be something of a closer in some of his races, but the Oaklawn Stakes wasn’t one of them, as he had the lead going into the final stretch, but finished nearly four lengths off the pace of Mr. Big News. He’s an interesting horse for Richard Baltas and could be used by some risk takers in exotics.

Farmington Road (12/1) was second in that Oaklawn Stakes race, finishing 3 1/4 lengths behind Mr. Big News, who won at 46/1 on a sloppy track. He got a horrible, terrible, no good start and closed extremely well. This is a closer through and through and Javier Castellano will have to know precisely when to hit the gas. His two most recent races, which includes the Risen Star Stakes, have been his two best speed figures. Is Todd Pletcher finally tapping into him as a three-year-old?

Closers are a little bit scary in a race like this with so much breaking speed, but he’s finished fourth and second at this distance, which is more than we can say for most of the field.

Wells Bayou (7/2) had a terrific run in the Louisiana Derby to take down that win. He was also strong in the Southwest Stakes, but couldn’t hold the lead over Silver Prospector. Wells Bayou is a frontrunner and a pacesetter. The question is whether or not he can maintain that pace over 1 1/8 miles. The son of Lookin At Lucky is a good one from the Brad Cox barn and Florent Geroux has been a good rider for him.

The far outside post is very interesting here. In five previous races, Wells Bayou has never started farther than fourth from the rail. Now he’s asked to take the long route to the first turn and that will take some time and cut into his ability to run from in front. IF he can’t run from in front, can he make up ground on the back end? That will be Geroux’s task in this one.

Man, what an excellent field this is. Like most good races, you can make a case for several different horses.

I’m actually going to go off the board a little and take a piece of Farmington Road to win and place. We’ve got excellent speed in the race, but we could also have a bunch-up of horses to the point where 10 Farmington Road can come from the outside and go unimpeded towards the leaders after Storm the Court, King Guillermo, and Nadal spend energy from posts next to each other to try and set the pace. He’s maturing at the right time and looks to be building towards a big victory.

5 Nadal is the one I like the most among the shorter prices. The distance is a big question, but the workouts have been good and so have the results with three wins in three races. Baffert has had tons of success starting three-year-olds in that third year and this looks like another one.

I also like 11 Wells Bayou a lot. I think Brad Cox is sitting on a legitimate Derby contender here. The far outside post is concerning with some extra energy spent, but the Louisiana Derby was 1 3/16 miles and he was good enough to get the win after getting bumped a little on the break.

UEFA Europa League Quarterfinals Pick of the Day – Napoli vs....