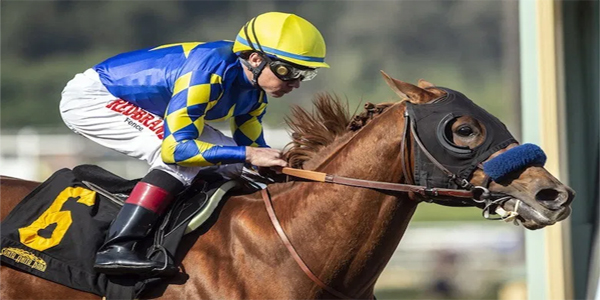 The first Saturday in May is supposed to be reserved for the Kentucky Derby, but just about everything in life has been thrown off schedule by COVID-19, so the Run for the Roses is not happening. What is happening, however, is the Arkansas Derby at Oaklawn Park in Hot Springs, AR. Originally a Kentucky Derby prep race set for April 4, the Arkansas Derby now runs on May 2 and will have two divisions.

We’ll preview each race here at BangTheBook.com, so you can check out the preview for Division 2 at that link.

Here, our focus is on Division I, which is Race 11 on Saturday May 2. This is the 84th running of the Arkansas Derby and easily the most unique. There are two divisions with 11 horses in each division in what is a Kentucky Derby prep race for what we hope is the first leg of the Triple Crown on September 5.

We’ll take a look at all of the horses in the field and put together a bet slip with this Arkansas Derby Division 1 preview. Post time for Division 1 is 6:29 p.m. ET.

Here are the post positions, the horses, trainers, jockeys, and morning line odds per the racing form (post updated to include scratches):

Charlatan is the even money favorite in his stakes debut after two blazing performances in his maiden and an allowance optional claiming, both at Santa Anita. Gouverneur Morris is the second favorite off of a disappointing run in the Florida Derby coming in fourth behind Tiz the Law, Shivaree, and Ete Indien. Anneau D’Or is the third favorite after a really poor effort in the Risen Star Stakes back in February.

Let’s take a gander at all 11 horses and start to narrow this field down.

Charlatan (1/1) is the favorite for Bob Baffert and Martin Garcia as he looks like a clone of Justify, the horse that won the Triple Crown back in 2018. Justify was not raced at all as a two-year-old. Charlatan made his debut just over two weeks prior to his third birthday. He won that maiden by 5 3/4 lengths over Shooters Shoot, who is the co-fourth favorite here.

There are a lot of ownership groups with a piece of Charlatan and the son of Speightstown has had some nice workouts around the Santa Anita track since that AlwOC win by 10 1/4 lengths back on March 14. This is a powerhouse of a horse taking a step up in class, but it got better from one race to the next and deserves the favorite role.

My Friends Beer (20/1) is a hell of a name for a horse, but this three-year-old has one win in eight career races. He was impressive in his stakes debut at Laurel Park last month, but hasn’t consistently shown the speed figures to stay with the others in this field.

Mo Mosa (30/1) is a big long shot for Michael Maker and Kendrick Carmouche. The son of Uncle Mo has shown some flashes, but finished 5 3/4 lengths behind Shooters Shoot in an AlwOC in his Oaklawn debut back on April 11. He went off at 50/1 after going off as the longest of the long shots in the Tampa Bay Derby back in March and finishing 44 1/4 lengths behind King Guillermo. He was a strong closer at one mile last time out, but this is a much stronger field.

Gouverneur Morris (9/2) was on our Florida Derby card and came in fourth. Had Shivaree not snuck into second at 80/1, we would have hit the box trifecta with Ete Inden and Tiz the Law. Unfortunately, the ride for John Velazquez wasn’t smooth out of the gate and he didn’t want to push the son of Constitution too hard after getting caught in traffic on the backstretch and making a wide turn on the way home.

The morning line had Gouverneur Morris around 8/1 for the Florida Derby and he went off at 5/1, as expected. His data points, including a second in the Breeders Cup Futurity, were good, but it turned out that a step up in class proved to be a problem. Has enough changed since March 28 to get him on the board here?

Jungle Runner (30/1) won his first career stakes race at Remington Park in Oklahoma, but has finished fourth, eighth, and fifth since and at least 14 lengths behind the winner. He was 22 lengths off the pace at Sunland Park back in February for the Mine That Bird Derby. It was his first time going more than a mile and he faded badly. He did the same going one mile in the Smarty Jones here at Oaklawn. This field looks too much to overcome.

Shooters Shoot (8/1) has been scratched.

Wrecking Crew (20/1) has been scratched.

Anneau D’Or (6/1) will be back with Juan J Hernandez in the irons. Joel Rosario rode him in the Risen Star Stakes and got bumped off the pace early and never became much of a threat. With Hernandez, Anneau D’Or has a win and two seconds by a head against Thousand Words and Storm the Court.

The bloodline is good. The speed figures in the Breeders’ Cup Juvenile and Los Alamos Futurity were terrific. He went off as the favorite in the Risen Star and never came close. His only win has been on turf, but he could change that this weekend.

Winning Impression (15/1) is a Dallas Stewart horse and you don’t want to eliminate those in these types of events. That being said, this is a stakes debut for a horse that has not had the same speed figures as the other competitors. Julien Leparoux must see something in the horse coming off of an AlwOC win at 12/1 on a sloppy track back in April to get back in the mount again. I don’t see it based on the rest of the field.

Crypto Cash (20/1) looks to follow the inspiration for his namesake in this one. With Bitcoin prices going through the roof, Kenneth McPeek is hopeful that his colt is sitting on a big effort for Corey Lanerie. Lanerie was in the mount and finished fourth at Tampa Bay back in March in Crypto Cash’s stakes debut.

McPeek tends to do well with these horses thought to be throwaways in races, but this is a return to dirt after two races inside the main track. It is a big ask, but the workouts have been decent.

Basin (8/1) is the other entry here for Steve Asmussen. The third-place finisher in the Rebel Stakes was a non-factor in the Oaklawn Stakes last month on a sloppy track. Ricardo Santana Jr. is back in the saddle and he was there when Basin broke his maiden last July at Saratoga. The top-end speed may not be as strong for this horse as it is for others, but his consistency has a chance to lead him to the board. The far outside post is a big ask, but he is something of an endurance racer.

Charlatan has the shortest trip on the rail and looks to be the best in class for Division 1. The additional distance will just be another question answered leading into the Kentucky Derby.

The race is really for second here. Anneau D’Or is the only other horse to post a speed figure in Charlatan’s class. Gouverneur Morris has an excellent bloodline and trainer combo. With Shooters Shoot scratched, Basin has popped on to my radar a little bit more here. He is an endurance horse coming from the outside that can stalk the pace and then have a great shot to hit the board. I’m scared of Gouverneur Morris after that last effort.

We know the 1 has to be in there, as this is Charlatan’s race to lose. Anneau D’Or is in a bounce back spot, reunited with his jockey, and now with a bad three-year-old debut in the rearview mirror. The third one in my exacta box will be Basin. The fact of the matter is that Gouverneur Morris has had issues in traffic. He was thrown off-stride in the Breeders’ Cup Futurity by Maxfield after taking the lead and narrowly held on for second. Traffic was an issue in the Florida Derby.

So, I’ll leave the Pletcher/Velazquez tandem off the card, but if you want to add a fourth horse to a box trifecta or play around with exotics, he’s a contender.