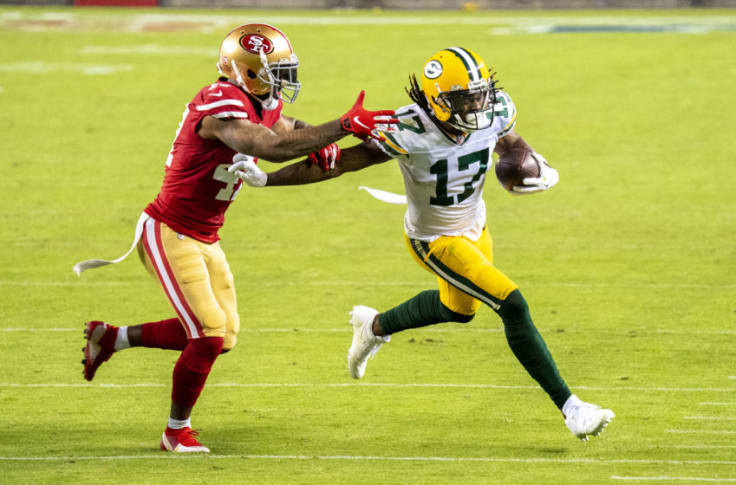 The Green Bay Packers will visit Levi’s Stadium in Santa Clara for the third straight season on Sunday, September 26, 2021. Over the previous three years, the Packers and 49ers have met each other four times, including the 2020 NFC Championship Game that saw the Niners dismantling Green Bay as 8-point home favorites, 37-20.

This time around, the 49ers opened as 3.5-point favorites on Bovada Sportsbook. The Packers are +160 moneyline dogs, while the totals sit at 49.5 points. Let’s see what’s the best Packers vs. 49ers betting pick for this Sunday Night Football along with the key stats and betting trends.

The Packers bounced back against the hapless Lions

The Green Bay Packers (1-1; 1-1 ATS) suffered a humiliating 38-3 loss at the New Orleans Saints in their opening game of the 2021 NFL season. In Week 2, all eyes were on Aaron Rodgers, and the reigning MVP tossed for 255 yards and four touchdowns, completing 22 of his 27 passing attempts.

The Packers trailed by three points at halftime, but they stepped up in the second half and shut down the Lions’ offense while tearing their D apart. Aaron Jones went bonkers for 115 yards from scrimmage and four touchdowns, while Davante Adams had eight receptions for 121 yards.

Green Bay struggled to cope with the Lions’ offense in the first half, but since the break, the Packers have surrendered just 147 total yards while forcing a couple of turnovers. Back in Week 1, they allowed the Saints to carry the pigskin 39 times for 171 yards.

The 49ers continue to struggle with injuries

After a 41-33 victory at the Detroit Lions in Week 1, the San Francisco 49ers (2-0; 1-1 ATS) outlasted the Philadelphia Eagles 17-11 as 3-point road favorites last Sunday. However, they suffered a few injuries, finishing the game with one healthy running back in their backfield.

Raheem Mostert is done for the season after a knee injury in the opener. Last weekend, rookie RB Elijah Mitchell left in the fourth quarter with a shoulder injury; JaMycal Hasty exited due to an ankle injury, while another rookie RB Trey Sermon suffered a scary head injury on his first carry on the day.

Jimmy Garoppolo led the way for the Niners in Philadelphia, running for five 1st downs and scoring on his own once. Garoppolo also threw for 189 yards and a TD, completing 22 of his 30 passing attempts. The Niners kept the ball in possession for nearly 35 minutes even though they gave up 151 rushing yards on 29 totes.

The 49ers are only 1-7 straight up and 2-6 ATS in their last eight outings at home. With so many injuries in their backfield, the Niners will have a tough time establishing their style of play despite all the problems among Green Bay’s defensive unit.

Hereof, I’m backing the visitors to cover a 3.5-point spread. The Niners’ D is a bit of a mystery after allowing a bunch of points at Detroit and holding the Eagles to just 11 on 328 total yards. They could easily struggle if Aaron Rodgers put on a show and the Packers start to run efficiently.

Both teams will have a huge motive, and I’m expecting to see a high-scoring affair. Last season, the Packers trounced the Niners in San Francisco 34-17, but the hosts missed their entire starting lineup due to a COVID-19. This time, the 49ers have different selection problems, but they should still have enough firepower to move the ball and score a few touchdowns against the Packers’ shaky defending.

On the other side, Green Bay will look to bounce back from its previous road clash when the Packers scored only three points. The over is 5-1 in Green Bay’s last six games overall, and it is 5-2 in the Packers’ previous seven road tilts against the Niners.