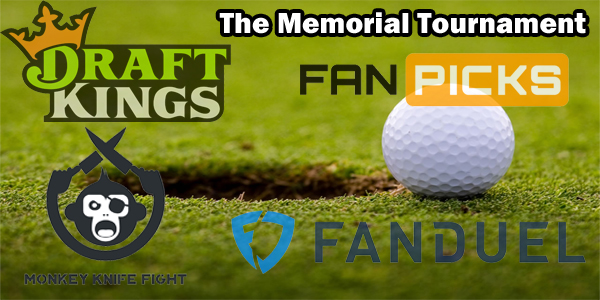 The course is expected to play tougher and the field is definitely stronger as we take a look at the second straight event at Muirfield Village Golf Club in Dublin, Ohio. This is the first time since August 1957 at Tam-O-Shanter that consecutive PGA Tour events have been played on the same course.

There will be a ton of discussion in fantasy circles this week about that angle. The course is going to play different, though. Pin placements will be altered, the rough will likely be thicker, tee boxes will be moved forward and moved back. How much should we incorporate last week’s data into this week’s handicap?

Admittedly, I don’t know the answer and, quite frankly, nobody does, since this situation has not popped up in the age of betting and DFS. We’ll present some information and you can decide what you like and dislike with this week’s DFS value picks for the Memorial Tournament.

Doc Redman ($7,600) – Putting wound up playing a pivotal role in the final rounds on Sunday, but this is traditionally a course where strokes gained tee-to-green reign supreme. More specifically, SG: Approach. Doc Redman has had his putting issues off and on throughout his young career, but the Clemson product is like a lower middle class version of Collin Morikawa. It would be unfair to call him a poor man’s Morikawa, because he’s better than that. Redman did not play last week, so he has no preconceived notions about the course, but he’s been 21st, 11th, and 21st the last three events with single-digit bogeys and no doubles. He is a pretty pure ball striker and his skill set should play well this week. Redman was third in SG: T2G in the Travelers and 13th in the RBC Heritage.

Corey Conners ($7,400) – Alright, let’s bark up this tree again. Corey Conners was $7,600 last week in a slightly weaker field and finished T-39th. We’ll hope for better results here at $7,400. Conners is not a great putter, but he tends to be very good off the tee and usually has excellent ball-striking metrics. He played better than his 4-under would indicate last week, as he was well on the plus side in SG: Approach. He was actually 14th in the field in that very important metric. He was just outside the top 20 in SG: T2G, with SG: APP covering a lot of that number. Forgotten in a field of ball strikers, we’re getting a fair price on him this week.

Harris English ($7,300) – Harris English is a forgotten player this week. Futures odds have a pretty big number on him and you can see his DFS price. English finished 17th at the RBC Heritage and then was forced into quarantine for a positive COVID-19 test. He was mostly asymptomatic, but he withdrew from the Rocket Mortgage Classic. Now he’s back and we’re getting a pretty good price on him. It was a long time ago, but he scored a top-10 in the Arnold Palmer back in March and had a top-20 in the Honda Classic in February. He did a little bit of everything well at the RBC and maybe the 30-year-old is just ready to turn the corner and become a regular threat.

Lucas Glover ($7,100) – Lucas Glover skipped last week, but he’ll take a string of four straight top-25 finishes into this weekend at Muirfield Village. Glover was fourth in SG: Approach in the Travelers and 10th in that department in the Rocket Mortgage Classic. His putting has been an issue, but this is a course that does downplay strokes gained putting a lot more than other events. As long as he can play well tee-to-green, he’s got the chance to provide some nice points at a cheap price. With the heavy hitters in this field, including 26 of the 30 from last year’s TOUR Championship, you’re going to run out of money pretty quickly.

Troy Merritt ($6,600) – Troy Merritt was kind of all over the place last week in some respects. He eventually finished tied for 22nd at 8-under, but that isn’t a bad result with only 16 birdies. Merritt wound up with 16 birdies to go with eight bogeys and a ton of pars over his four rounds. Merritt tied for 17th last year in this event, despite being one of the worst putters in the field. This past week, he was fifth in SG: Approach and 17th in SG: T2G per DataGolf. Ironically, Merritt was one of the best putters for the Rocket Mortgage Classic. Let’s see if he can put it all together this week at a great price.