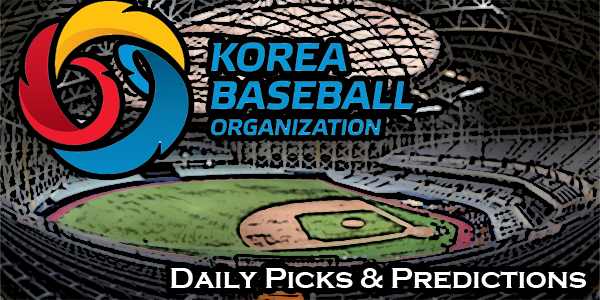 Alright, well, it’s been fun, but it’s time to move on. This will be the last installment of the KBO picks article at BangTheBook.com. I’ll be focusing my attentions on what will hopefully be the sports returning in the near future. I don’t know if you’ll be sorry to see this article go or not, but I hope that if you’ve had success with the KBO, you keep plugging away at it.

The Bullpen Report will remain in tact and updated, so have no fear if you have been using that as a resource. I just highly recommend that you bookmark it, as you won’t be able to click on the article anymore to get it.

Odds are from BetOnline Sportsbook one final, but please be sure to scan the market for the best odds, not just for the KBO, but for everything in general.

I guess it’s only fitting that we get one more Koo Chang-mo day out of the article, right? The 23-year-old future MLBer has a 1.48 ERA and a 0.81 WHIP in his 73 innings this season. He’s nearly allowed as many doubles as earned runs. He’s given up just 12 earned runs on just 46 hits in his 11 dominant starts. He had one bad start at KT. Otherwise, he’s allowed one or zero runs in nine of 11 starts and allowed two runs in another.

He’s struck out 82 and walked 13. He’s basically on a different planet as far as the KBO is concerned. I’d be shocked if we see anything different from that here against LG. He’s pitched at Jamsil Stadium once this season and held Doosan to one run on two hits over eight innings. The only thing that has really evaded him to this point is a complete game.

Kim Yun-sik will have the unenviable task of trying to keep pace with Koo. Kim has worked 10 times in relief and once as a starter with 11 earned runs allowed on 20 hits in 13.2 innings of work. He’s struck out eight and walked three. He’s also hit three batters.

In Koo’s last start against Lotte, we saw the Giants effectively punt the game by resting most of their team. They also used 11 pitchers the day before in order to get an extra-inning win, so the spot is a lot different. I don’t think LG will punt here, particularly with Monday’s off day coming up, but Kim is out there because of some injuries to other starting pitchers.

The doubly hard part about facing Koo is that he gets a good bit of run support with a strong LG offense. We’ll see what they do here against a reliever with a 7.24 ERA and a 1.68 WHIP and a bullpen that has posted a 7.00 ERA since June 7 with a 1.80 WHIP. My guess is that they’ll do just fine.

Kiwoom has cooled off quite a bit and will be hoping to avoid a sweep here at the hands of the Kia Tigers. The Heroes will welcome back Han Hyun-hee after he missed his most recent start. Kia will send Im Ki-young to the hill.

Han Hyun-hee, better known as Triple H around these parts, allowed 10 runs on 11 hits in just 1.2 innings against Doosan last time out. He appeared in 61 games as a reliever last season and had a strong 3.41 ERA with a 1.21 WHIP. He had been a starter off and on the previous three seasons with ERAs between 4.47 and 4.82, so that’s probably what we can expect for him going forward.

He’s got a 5.94 ERA with a 1.62 WHIP now, but he allowed 13 baserunners and only got five outs last time, so that will skew a WHIP. Take those away and he had allowed 73 baserunners in his first 51.1 innings. That is a 1.42 WHIP, which seems pretty reasonable. He also allowed those 10 earned runs, so he had a 4.38 ERA. Again, that seems reasonable. Don’t let that one really bad start skew your opinion too badly.

I’ve talked a ton about Im Ki-young this season. He’s got a strong 3.42 ERA and a 1.31 WHIP, but so many of his numbers just don’t fall in line with his career marks. He’s allowed two homers in 52.2 innings. He allowed 20 in 105 innings in 2018 and seven last year with the deadened ball in 48.2 innings. He’s usually run a pretty strong walk rate, so I’m not so much looking at that, but the home run rate is something that really stands out. He also has a .338 BABIP against, which is down quite a bit from last season and down a little bit from two seasons ago.

The biggest thing is just that K%. He hasn’t run one over 17% in his career up until now. Kiwoom is a team that happens to have a lot of swing and miss, so he may just keep the train rolling. He also may run into some regression to the mean of his career numbers. At 27, maybe he is just finally fully healthy now after being limited throughout his career, but I’d remain skeptical. Larger sample sizes tell us a lot more than these 10 starts of this season.

Bullpen-wise, these two are pretty equal at this point in time, so I don’t see a big edge one way or the other. I think these two pitchers are pretty equal, too. Kiwoom’s offense is better long-term, but they’ve leveled off a good bit now from the torrid pace that they were previously on.

Moon Seung-won gets the nod for SK here and this seems like an extremely reasonable price to take the Wyverns. He’s got a 3.18 ERA with a 1.14 WHIP. Like Im, but maybe even on a grander scale, I do look at Moon and question how he can keep this up. After all, he allowed 23 HR in 144 IP last season with the dead ball. He’s allowed four HR in 65 IP this season.

Moon’s 62 K in 65 IP is a much higher pace than anything he has had throughout his career, so that concerns me quite a bit as well. I do think that there are regression signs, but I’ve thought that a few times over lately and he’s allowed two earned runs or fewer in each of his last seven starts. This is not what we would consider to be a hard matchup against a pretty bad Hanwha team either. Moon may just be turning the corner a little later in the process, having missed his 2014-15 seasons.

Jang Shi-hwan gets another crack for Hanwha here. He’s racked up 56 K in 49.2 innings of work, but he’s also had a walk problem and a command problem, leading to a 5.07 ERA and a 1.83 WHIP. He’s walked 27, though he has only issued six walks in his last four starts. In those four starts, he’s only allowed five earned runs in 22 innings of work. He’s only given up one homer in that span as well. Jang has issues working deep into games because of all the deep counts, which definitely hurts Hanwha with a suspect bullpen.

Jang is also running a .404 BABIP, so that has hurt his bottom line quite a bit. Between the walks and the balls finding holes, the strikeouts have simply prevented him from having worse numbers than he already does. Against SK, one would think that he would be able to have some success, as this total of 8.5 suggests.

The Hanwha and SK bullpens are on pretty even footing, so this is basically a two-part question. How much do you trust Moon to be better than Jang and how much do you trust the SK offense? It would seem that Hanwha probably won’t do a whole lot, which is just a given with about three runs per game at home. If you think SK can get you there, then -140 is a pretty good price. If you can’t, then this is a game to stay away from.

His road at Kia got a little dicey and is his fourth-worst outing of the season by game score. Now he’s in Suwon, so I’d be a little bit skeptical. He’s only struck out 47 in his 70.2 innings and has allowed nine home runs. The KT offense has feasted on lefties, but Buchanan is right-handed, so that could offset these park factor concerns that I’ve got. On the other hand, his road pitching environments have been Kiwoom twice, SK, and then that start at Kia where he allowed eight hits, but only three runs.

There is a chance that Buchanan struggles here against a KT offense that has gotten the bats going at home in this season. Even though Buchanan is on the wrong side of the platoon split for the Wiz, he is a guy that I had some questions about coming into this KBO season as a foreign pitcher that may not thrive. More often than not, he has, but the blow-up potential exists.

Kim Min-woo will go for KT here. The 27-year-old has a 5.73 ERA and a 1.83 WHIP in his 37.2 innings of work. He moved into the rotation on June 5 and has allowed 13 runs in 30.2 innings as a starter. His relief work was quite poor, but his work as a starter has actually been pretty good. He doesn’t miss many bats, which is scary, but he’s only walked 10 batters over those six starts.

Kim has been good enough to keep his team in the game. Save for yesterday, the KT bullpen, specifically the primary relievers, have been pretty good as well. The fact that this line is only sitting at -120 with a pitcher that has a 5.73 ERA against a foreign pitcher is pretty telling about KT’s chances in my estimation here. We always want to try to read into the context of a line and this line is telling me that KT has a really good chance and that there are worries about Buchanan, specifically in these hitter-friendly settings.

I tend to agree with that sentiment. KT’s primary relievers seem to thrive on getting a lot of work, so yesterday’s blowups could just be precursors to good outings today.

BET ON THE KT WIZ AT BETONLINE SPORTSBOOK

We did not get the runs that I expected on Saturday, though Yu Hui-kwan wasn’t exactly impressive against the Lotte offense. We’ll see what Lee Young-ha brings to the table here. Lee was a guy that I had very high hopes for coming into the season. He had a 3.64 ERA with a 1.28 WHIP last year. This season, though, he’s got a 5.79 ERA with a 1.85 WHIP.

Lee’s pathetic 40/32 K/BB ratio is a big concern here, as well as the fact that he has allowed 80 hits in 60.2 innings. Doosan is one of the worst defensive teams in the league and Lee has made life really hard on himself with the walk rates. He’s “only” allowed nine earned runs over his last three starts, but that’s better than the 14 he allowed in his previous two starts. Each and every outing has been a struggle, though.

Lee does have the 10th-lowest LOB% in the league this season, so he’s been a little bit unlucky, but an 11% walk rate doesn’t mesh well with a 13.7% K%. He’s done a lot of it to himself with poor control and command.

He’s just not a particularly good pitcher. His most appealing start came last time out against Hanwha, when he allowed two earned over six innings, but still allowed four runs total. There isn’t much in this profile of interest.

In all honesty, as bad as Lee has been, this line looks light on the Doosan side. Their bullpen has been pretty good lately, at least relative to the full-season numbers. The Lotte bullpen is solid, but Jang will likely have them behind from the outset. The Doosan offense is a lot better than the Lotte offense. It seems like that should be more than a -140 favorite role for the Bears.