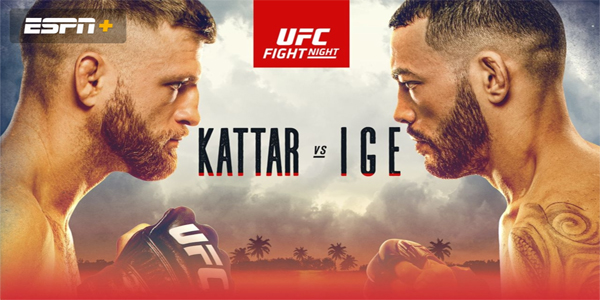 Dana White is all in with Fight Island. UFC on ESPN 13 with a main event of Calvin Kattar and Dan Ige will follow up what was an exciting UFC 251 card. White has wasted no time in setting this card up for Wednesday July 16, just a few days after the most recent pay-per-view event.

Without fans in attention, the fight card will start at 3 a.m. ET local time so it can be shown on the East Coast of the US in primetime. Twelve fights are slated for the card, but as we saw last weekend with Gilbert Burns forced out of the main event due to coronavirus, it is tough to take anything for granted these days.

We’ll use MyBookie Sportsbook for the odds for the Wednesday night card and hit on all 12 fights, with some extra attention paid to the main card bouts.

Action starts in the Fight Island cage between Jorge Gonzalez and Kenneth Bergh at 205 pounds. Bergh is the -150 favorite in what amounts to the UFC debut for both fighters. Bergh lost under the watchful eyes of Dana White in his Contender Series matchup back on July 9. It was ruled a No Contest less than four minutes in. It was also his first fight in over two years. Gonzalez is taking this fight on extremely short notice. He won at UWC: Total War back on July 3 by first-round sub to improve to 16-4 in his pro career. It will be a big moment for the 36-year-old at +130 and he’s a lively upset candidate.

Undefeated Welshman Jack Shore puts his 12-0 record on the line against Aaron Phillips in the bantamweight division. Shore won his UFC debut in impressive submission fashion against Nohelin Hernandez back in September. Shore is -600 against the 30-year-old Phillips, who has not had a MMA fight since February 28, 2015. There isn’t much more to say than that.

The first women’s fight on the card is in the flyweight division between Diana Belbita and Liana Jojua. Belbita lost her UFC debut to Molly McCann and also has past losses to Ariane Lipski and Cristina Stanciu, both of whom were in the UFC. She is -165 here against Jojua, who also lost her UFC debut to Sarah Moras at UFC 242. Belbita is 24 and a veteran of 18 MMA fights already. Jojua is 24 with a 7-3 record, including five submission wins. This looks like a good fight and a good contrast of styles between young fighters that could have a future in the division. Belbita does have a noteworthy size edge in this striker vs. grappler match.

Two of the three losses for Chris Fishgold have come in the UFC. One was to main event fighter Calvin Kattar. The other was last time out against Makwan Amirkhani. Fishgold will look to climb to .500 in his UFC career against longtime UFC stalwart Jared Gordon. Gordon is the -145 favorite here, despite losses in three of his last four fights. Fishgold’s ground game is the main worry for Gordon here and he has a great chance to dictate this fight with it and either win by sub or decision. The +115 dog is the look in this fight.

Former CW Champions Modestas Bukauskas takes on Andreas Michailidis in the UFC debuts of both fighters. This one is also at 205 pounds. Bukauskas was originally to face Vinicius Moreira, but Moreira tested positive for COVID, so Michailidis steps in on short notice. Bukauskas is the -225 favorite with a bit of a height advantage. Michailidis has won in the first round of four of his last five fights, so a long fight would not help him. Early aggression may lead to late fatigue, where Bukauskas can take advantage.

Ricardo Ramos is -160 for this matchup against Lerone Murphy that is heavily juiced to the over 2.5, so this one could be our first clear decision of the men’s fights. This will be the seventh UFC fight for Ramos in his career. It will be the second for Murphy, whose unblemished record fell in the split decision draw at UFC 242. He hasn’t lost yet, but is now 8-0-1 going into this fight. Murphy’s past fights have been in very small promotions. Ramos is experienced at the top levels and has had success. The -160 price doesn’t appear high enough here.

You may want to familiarize yourself with the name Khamzat Chimaev. The Swedish-born middleweight is a -315 favorite against a much more recognizable name in John Phillips. In fairness, the  upgrade to the UFC has not gone well for Phillips, who has lost three of his four UFC fights. He did beat Alen Amedovski by knockout in just 17 seconds back in September for his first UFC win and 22nd overall, but his first three efforts weren’t great. Chimaev has the size edge and comes to the UFC with some potential with six finishes in six fights, five of which were in the first round.

Mounir Lazzez brings a 9-1 record to the UFC for his debut fight against Abdul Razak Alhassan. As the +260 price would imply, Lazzez is suffering from a lack of competition with that strong record. The 6-foot-1 Tunisian started his pro career in 2012 in Dubai FC, so he has something of a home court advantage here in the sense that he trains with Team Nogueira in Dubai. Whether or not that helps here with a step up in class remains to be seen. He’s won eight times by knockout and has gone 1-1 in decisions.

We have not seen Abdul Razak Alhassan in a long time. His last fight was a very impressive first-round win over Niko Price back at UFC 228 on September 8, 2018. He was an impressive prospect in the division with several first-round stoppages, but was forced away from the UFC for a rape investigation and trial. He was found not guilty on March 5 and now makes his UFC return. The 34-year-old Ghana native should be set up for a win here in what should be an exciting fight. He certainly has a lot on the line in his return.

Former CW champion Molly McCann has rattled off three wins in a row since losing her UFC debut to Gillian Robertson. McCann is now 10-2 in her MMA career and she’ll try to improve to 11-2 in what looks like a coin flip fight against Taila Santos. Santos suffered her first career loss last time out against Mara Romero Borella in what was her first official UFC fight. She beat Estefani Almeida on August 11, 2018 after nearly a two-year layoff before getting that chance against Romero Borella.

It was a split-decision win for Romero, who had more top control and also just looked like the bigger aggressor in the fight. She landed more strikes, but Santos may have landed the more significant ones. Each of McCann’s last three wins have come by decision and she only has four stoppage wins in her career, hence the heavy juice on the over. Santos has 12 career stoppage wins. McCann’s last two decision wins have come in dominant fashion, though. The problem is that she hasn’t shown the striking power. We know Santos has that.

McCann likely wins here, as she just controls fights and comes away with wins, but Santos is a very dangerous opponent.

This is a pretty quick return here for Cody Stamann. He just went 15 minutes with Brian Kelleher at UFC 250 on June 6. It was an emotional fight for Stamann, whose 18-year-old brother, Jacob, died on May 27. It was a strong effort from Stamann, who won 30-27 across the board and really did control the fight. Now he’ll take on Jimmie Rivera, whose two most recent fights have been against Petr Yan, the now champion, and Aljamain Sterling, who is expected to get the next title shot.

Rivera went the distance in both fights, but he clearly lost them. Stamann also has a loss to Sterling on his résumé, which is one of just two losses for him. Three of Rivera’s four career losses have happened within the last 25 months. If Stamann remains aggressive against Rivera, he can win this fight. If Rivera is the aggressor, he should win. This fight is basically a question of how close to Yan and Sterling is Stamann. If you think the answer is pretty close, then he should win this fight. If you think there is a drop-off, then it’s Rivera.

Ryan Benoit is going to need a better performance than his last one against Alateng Heili if he wants to beat Tim Elliott in this fight. Benoit was fighting for the first time in 25 months and came up short in the split decision. That was only the second UFC fight for Heili. It was a disappointing return to say the least for Benoit. But, the rust should be gone now for the 30-year-old. He’s also taking on a guy in Elliott that has a lot of problems of his own.

Elliott now has 11 losses in his pro career and he’s gone just 3-5 since working his way back to UFC after a stint with Titan FC. He hasn’t won a fight since December 30, 2017, which is only the aforementioned span of three fights, but still. He hasn’t been competitive in any of them. This is actually a pretty disappointing lead-in to the main event, which happens with so many events crammed together and the pandemic around the globe, but there just isn’t a ton of intrigue for this matchup.

Elliott gets the slight nod, given that this is just the second fight for Benoit in 2.5 years, but there isn’t much to like about him here either.

This seems like a pretty fitting end to a lackluster card. Dan Ige is a big underdog to Calvin Kattar. The 28-year-old Ige has a 14-2 career mark and a six-fight winning streak. Each of the last three wins have come via decision, including a controversial one over Edson Barboza last time out. His performances don’t really pass the eye test, so maybe this line is a little bit inflated on Kattar given that Ige has such a good record.

The problem is that Kattar has a size advantage here and is just the better all-around fighter. There may be a little recency bias in that Kattar knocked out Jeremy Stephens back on May 9, but he’s a striker and a finisher, whereas Ige is more of a grappler and a decision winner. The total is juiced a little to 2.5, but the slight juice is indicative of the fact that Kattar is expected to inflict some punishment here.