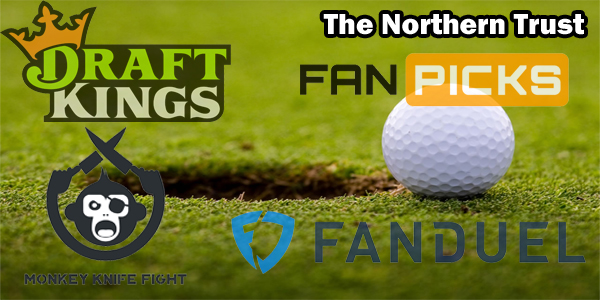 The FedEx Cup Playoffs get underway this week at TPC Boston in The Northern Trust. Course form DFS players will want to note that TPC Boston was previously the home of the Dell Technologies Championship and the Deutsche Bank Championship. The Northern Trust bounces around to different courses, so you probably don’t want to factor past results from that event into this week’s DFS selections.

The number of eligible players for this event is 125 and the number of players in the event as of Monday is 125. The FedEx Cup Playoffs will be cut down to 70 for next week’s BMW Championship, so some players have a lot more on the line than others.

As usual, we’ll be looking for the value guys. This will be the last DFS piece until the US Open on September 20. With small fields the next two weeks, there really isn’t any point in bargain hunting.

Si Woo Kim ($7,700) – Si Woo Kim wasn’t even sure if he’d be playing golf this weekend. He was somebody who went into the Wyndham Championship last week in need of a big showing to qualify for the FedEx Cup Playoffs. Finishing third was plenty good enough. Kim could very well have won the tournament, had he not had a major blow-up on Sunday. He shot 65-65-62 before a final-round 70. It’s hard to tell what happened with Kim, but he fired four rounds in the 60s on a tough track at TPC Harding Park. He’s been third and eighth in SG: T2G the last two events. He’s swung it well and he needs to keep accumulating points if he wants to keep advancing, so he’ll be fully focused this week.

Kevin Kisner ($7,600) – Kevin Kisner was actually a pick to win from our official Northern Trust preview. We know Kisner can roll the rock well. He’s consistently been one of the best putters on the PGA Tour and that will help him this week against a field full of long bombers. Kisner hasn’t been a one-trick pony lately, though. He was sixth in SG: T2G last week at the Wyndham Championship and sixth in SG: Approach, which is generally one of the most important metrics. He was 14th in SG: APP two weeks ago at the PGA Championship. Kisner is really playing well all around and he’s coming off of a strong third-place finish last week at the Wyndham that has him in fine form for TPC Boston.

Harris English ($7,600) – Harris English was $9,300 last week in DraftKings contests, which gives you an idea about the strength of that field. English only tied for 23rd, but finished with four rounds in the 60s. In fact, 10 of the last 12 rounds for English have been in the 60s. He was 13th at the Memorial with no rounds in the 60s, but he played really well there. English has five straight top-25 finishes and he’s been in terrific form all the way around. He was in the top 15 in SG: Putting at the PGA Championship and has been an underrated ball striker over the course of the restart.

Harold Varner III ($7,400) – Harold Varner III has played two excellent tournaments the last two weeks and it looks like he’s in a good form cycle for us to take a run at him. Varner was second in SG: T2G last week at the Wyndham Championship and fired an opening-round 62 to share the first-round lead. He played extremely well at the PGA Championship as well. He was 13th in SG: T2G in a major field full of absolute stars. This course is sort of a hybrid in terms of which metrics are most important, but Varner was on the plus side in every category last week, so he appears to be in great shape going into The Northern Trust.

Joel Dahmen ($7,100) – Joel Dahmen had the luxury of taking last week off because he’s in the top 40 in FedEx Cup points. Dahmen has played well since the restart with four top-20 finishes. Dahmen putted really well two weeks ago at the PGA Championship. The week prior, he putted poorly at the WGC-FedEx St. Jude, but played really well in SG: T2G finishing 12th in that department. If he can put it all together this week and come up with the total package, then he’ll be a great grab at a really cheap price. Given how well he’s played since the restart, the only thing depressing this price is the strength of the field.