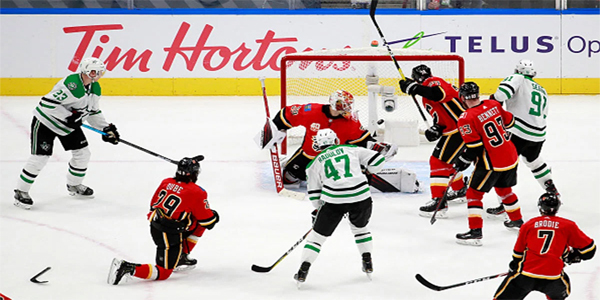 The fact that the best-of-seven series between the Dallas Stars and the Calgary Flames would suggest that it has been an evenly-played affair to this point. Calgary won Game 1 and Game 3. Dallas won Game 2 and Game 4. Dallas has outscored Calgary 8-6 at even strength, but three of the four games have been decided by one goal.

That isn’t really the case at all. The Dallas Stars are a -125 favorite per DSI Sportsbook to take a 3-2 series lead and that seems like a pretty good bet if you ask me. The Stars have dominated play in this series, but haven’t had much to show for it. You have to think that evens out at some point, right?

At 5-v-5, Dallas has owned this series. They have 93 scoring chances to 48 for Calgary. They have an expected goals for of 8.14 and the Flames are at 4.22. Dallas owns a 58.18% to 41.82% advantage in Corsi For%. The Stars have a 38-21 edge in high-danger scores chances, but they’ve only scored two goals on those opportunities. The Flames have scored three on theirs.

This series basically comes down to what Cam Talbot has done in net for Calgary. His 94.74% high-danger save percentage is one of the main reasons why the Stars aren’t going for a series victory in Game 5, which is a 3:30 p.m. MT puck drop from the Edmonton bubble.

Let’s be honest. Scoring was a problem for Dallas during the regular season, so it probably isn’t a huge surprise that they’ve had trouble cashing in their chances in the playoffs. The irony is that they’ve scored five goals in each of their two wins, but they could have scored a lot more in the other games.

Talbot has a .925 SV% with 12 goals allowed on 159 shots. The Stars have used both goaltenders, as Anton Khudobin has allowed nine goals on 89 shots and Ben Bishop has allowed four goals on 26 shots. Bishop was declared unfit to play after Game 1 and that pushed Khudobin, who actually graded better in goals saved above average during the regular season, into the starting role. The problem is that it hasn’t translated to his three games in this series as of yet. Khudobin actually led the league in GA%- with 78, which means he was 22% better than the rest of the league in goals allowed percentage.

His 17.75 GSAA mark was among the best in the league and he even surpassed his previous career-best of 16.04 last season. He’s reliable enough that the Stars shouldn’t have too much to worry about with him in net.

The problem is that they cannot score. Again. Dallas only scored 178 goals during the regular season and had the second-fewest 5-v-5 goals scored in the league. Only the Detroit Red Wings, who were far and away the worst team in the league, did a poorer job of scoring at 5-v-5.

With the Stars, the difference was that their 110 goals allowed 5-v-5 were the second-fewest in the league. They didn’t score, but at least they didn’t give up a lot of goals. The Flames were -13 in 5-v-5 scoring, so they weren’t great in that department either.

But, as this series has played out, Dallas has easily been the better team at 5-v-5. They just haven’t gotten the same level of goaltending. They haven’t been able to capitalize. They’ve also given up three shorthanded goals. That won’t get it done at all. That’s how you dominate a team 5-v-5, but let them hang around anyway.

If you couldn’t tell from the tone of the article, the Stars are the Game 5 play. They’ve carried 5-v-5 play and now get the benefit of the last change. Khudobin was better in the regular season than he has played to date in this series. Talbot appears to be overachieving, particularly on Dallas’s quality chances. It should be the Stars with a chance to end it in Game 6.

TAKE THE DALLAS STARS IN GAME 5 AT BETDSI SPORTSBOOK