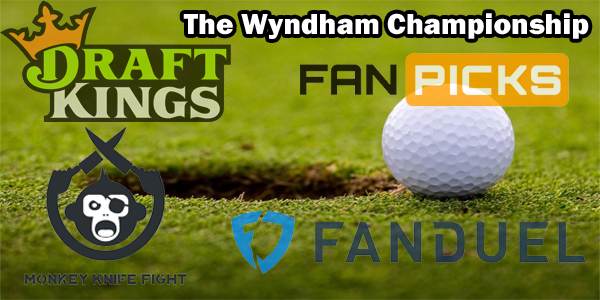 The Wyndham Championship field is nowhere near the strength of several of the fields that we’ve seen since the restart, but there are a lot of intriguing storylines and maybe some great DFS values for this week. This is the last event before the FedEx Cup Playoffs, so a lot of players will have a lot of incentive this week, including guys like Sergio Garcia, Jhonattan Vegas, and past winner Si Woo Kim.

We’ll be looking for the top value buys and there should be a lot of them this week. This is a long par 70, so SG: Off-the-Tee will be a big selling point this week. Putting is also very important, so we’ll try to hone in on those two stats with our value plays. There are a lot of popular players at big prices this week, so you may run out of cap space quickly.

Rory Sabbatini ($7,500) – Rory Sabbatini may not fully fit the statistical profile that we’re going for this week, but the South African has played very well at Sedgefield CC in the past. Sabbatini is also not that far removed from playing really well this year. Sabbatini was 14th, 21st, and 17th in three of the first four events after the restart. In terms of Sedgefield, specifically, Sabbatini was sixth last year and fourth back in 2017. He was eighth in 2013. Sabbatini did a little bit of everything well last year en route to 16-under. Sabbatini is 80th in SG: T2G, which is not a bad gamble in a field like this and he’s enjoyed this course in the past.

Henrik Norlander ($7,300) – Let’s hope the layoff didn’t slow down Henrik Norlander. He’s back after not playing in the WGC-FedEx St. Jude Invitational and the PGA Championship. Norlander was T-23rd, T-6th, T-31st, and T-12th before taking a couple of weeks. He finished the 3M Open with a 6-under 65 even though he had a double bogey on 7. Norlander is pretty solid across the board, as he sits on the plus side in every category. He’s also top 20 in driving accuracy and GIR%. He hasn’t played here since 2016, but he’s playing some of the best golf of his career lately. He’s been firing daggers on approach the last few events. While that isn’t as key of a stat here as it is at most courses, it certainly can’t hurt with some of the two-tiered greens.

Sepp Straka ($7,100) – Alright, let’s get to our OTT guys. Sepp Straka is also playing very well of late. Straka is a strong 31st in SG: OTT and a solid 63rd in SG: Putting. He’s been in the top 20 in three of the last five events and made it through all 72 holes last week at the PGA Championship, an event that humbled some of the game’s top players. He’s a guy that has the length to shorten some of these long par 4s and he’s seventh in final round scoring average, so he has the chance to move you up the board on the final day.

Kristoffer Ventura ($6,900) – I’m not sure what happened during the shutdown, but Kristoffer Ventura became a different player. He’s only made 6/15 cuts this season, but Ventura has three top-25 finishes in his last four events. Putting was huge last year at this course, as evidenced by JT Poston’s win and Webb Simpson’s runner-up, as those are two very reliable putters. Ventura is fourth in SG: Putting on the tour this season. The 24-year-old has really found his game recently and it seems like the fourth-place finish at the Charles Schwab Challenge coming out of the lockdown was a real springboard for him.

Chase Seiffert ($6,400) – Chase Seiffert is one of those guys with a lot on the line this week. If he wants to make it into the Northern Trust next week at TPC Boston, he’s going to need a good showing this week. Seiffert is plenty capable of that. He was fourth a few weeks back at the Workday Charity Open. He’s 85th in SG: OTT, but 45th in SG: Putting. He’s 64th in SG: Total and that’s not all that bad in this field. It certainly isn’t bad enough to be listed such a really cheap price. Seiffert graded pretty well in several approach categories as well. For this price, you don’t need the world, but you need somebody with upside if you run out of money.