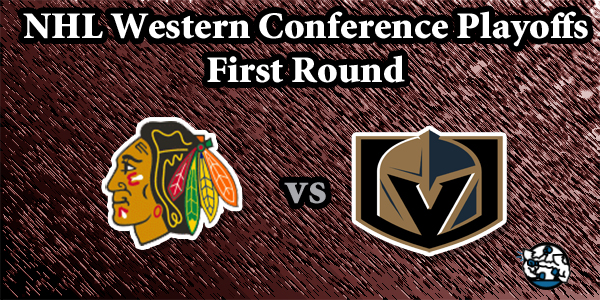 The Vegas Golden Knights are the biggest favorites in the first round of the 2020 NHL Stanley Cup Playoffs. They did what they had to do in the Qualifying Round in order to take down the top seed and their prize is the Chicago Blackhawks. The Blackhawks pulled off the 12 vs. 5 upset in the Qualifying Round over the Edmonton Oilers. They’ll have to pull off an upset of much greater magnitude to advance to the next level.

The Blackhawks and Golden Knights will get started late on Tuesday night, but their other games will be at a more reasonable hour for Blackhawks fans and those around the globe that were captivated by Vegas’s inaugural season playoff run and simply became fans as a result.

One potential back-to-back has been thrown in as a wrinkle for every series, but the fact that it falls on Games 3 and 4, which could be potential swing games in the series, could come into play.

The Blackhawks might have lucked out in the Qualifying Round. Edmonton’s problem most of the season was a lack of depth. Connor McDavid and Leon Draisaitl got their points all season long, but Edmonton had just gotten the roster close to where they wanted it when the pandemic shut everything down. It was a team built on speed and transition. Those things get out of sync with long layoffs and the Blackhawks, who were a pretty good offensive team in their own right, simply scored more goals than the Oilers.

Chicago faces a very big uphill climb here. The Blackhawks allowed the second-most high-danger scoring chances in the NHL with 728. They had 614 of their own, which ranked 12th. The problem is that the Vegas Golden Knights led the NHL in high-danger chances at 5-v-5 and did so by a large margin.

On the plus side for Chicago, Vegas only had 150 goals at 5-v-5, which ranked 10th, so they squandered far too many of those opportunities. That might be enough for Corey Crawford and Company to hang around for a bit. Crawford struggled early in the series against the Oilers, but bounced back and played well in Game 3 and Game 4 to help his team advance.

Chicago still has Patrick Kane and Jonathan Toews. Duncan Keith is 36 now and a step slower than he used to be, but a youth infusion with Dominik Kubalik, Alex DeBrincat, and Dylan Strome really helped the Blackhawks generate a lot of offense with their forwards.

Is there a goaltender controversy for VGK? There shouldn’t be. Marc-Andre Fleury held this team back during the regular season with a 2.77 GAA and a .905 SV%. He had a GSAA of -6.50. Malcolm Subban wasn’t any better. Lehner was over 10 GSAA for the Blackhawks and he was a Trade Deadline pickup for the Knights. Lehner stopped 78 of 83 shots to finish the regular season and 56 of 62 shots in the Round Robin.

The advanced metrics crowd loves this team, so the line was definitely set high for that reason and also because Chicago would have been well on the outside of the playoff picture if COVID hadn’t happened. Chicago was the last team to make it in the West and they were six points out when everything shut down.

The Vegas penalty kill was not good during the season. They ranked 27th in that department. Using the xGA formula, Vegas allowed 10 more goals than they should have in those man-down situations. That is another area where Lehner should help dramatically.

Vegas looked good in the restart, though they did allow seven goals at 5-v-5. It will be tough for them to hit the ground running and look dominant in this series right from the jump against a Chicago team that played very well for the most part against Edmonton. So, I’ll give the Blackhawks a game, but they aren’t good enough defensively to win this series in upset fashion.

VIVA LAS VEGAS IN THE FIRST ROUND AT BETONLINE!