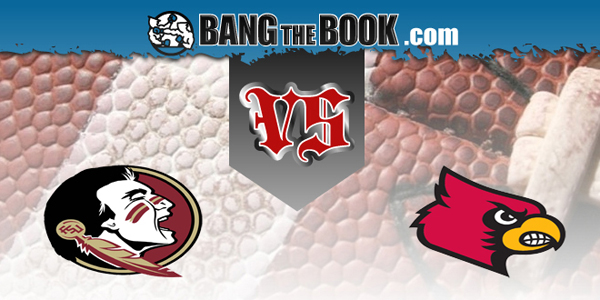 It doesn’t take a rocket scientist to understand that the Florida State Seminoles’ football program is not what it used to be. And whether coach Mike Norvell can reverse their fortunes remains to be seen. Perhaps last week’s victory over North Carolina, which was #5 in the country, was a turning point. At the very least it serves as a sort of redemption.

On Saturday the Seminoles will line up against a team looking for some redemption themselves. It’s the Louisville Cardinals, who made a gallant defensive stand last weekend at Notre Dame, only to lose 12-7.

Has there been an upward trajectory in the Louisville program from one year to the other under coach Scott Satterfield? Hmm, maybe. We don’t know if the defensive effort last week against Notre Dame was a one-off or not. But it hasn’t necessarily been the case for the Cards, who have shown difficulties against most capable offenses. So the question on the floor is whether the Florida State offense is capable.

Well, there would have to be a measured answer on that one. The ‘Noles were going nowhere with James Blackmon behind center, as he was not the ideal fit for the offensive approach first-year coach Mike Norvell wants to employ, and didn’t have a whole lot of time to figure it out with no spring practice.

But you could tell there was a little more bounce in FSU’s step with Jordan Travis taking snaps. He’s kind of interesting and kind of dynamic. A quarterback-turned wide receiver-turned quarterback again, Travis at least is able to make a few things happen in a way that doesn’t involve throwing the ball. Florida State’s upset of North Carolina was no mirage. And neither was Travis’ 107 yards on the ground and two touchdowns.

Yeah, speaking of upward trajectories, the Seminoles seem to be on one. It’s a little progress. It’s more confidence. Oh, and we also have the angle of Travis having started out his collegiate career at Louisville two seasons ago.

And there is a story there that probably hasn’t been fully told. Travis had been granted immediate eligibility for his transfer to FSU, which had been a curious decision by the NCAA. When asked about his stint at Louisville this week, Travis told reporters, “I’d rather not get into the experience of what happened there.”

But the Tallahassee Democrat, located in Seminole territory, had reported at the time of the transfer that Travis had been “verbally abused” on a regular basis at practice and abruptly decided to leave.

In the 31-28 upset over North Carolina, he suffered some physical abuse, as his left shoulder was banged up. But although he was not reported to be 100% by Norvell, he was back at practice with the expectation he would play.

The Cards’ attack produced just 219 yards last week as Satterfield has sort of pulled the reins back on QB Malik Cunningham. Here is an interesting thing to take a look at; Cunningham had to be carted off the field near the end against Pittsburgh because of a head injury. In a couple of games since, he has thrown for a little under seven yards an attempt. Understand that this was a guy who averaged 11.6 yards an attempt last year. He has, however, taken things to the ground a little in these last two games (99 yards rushing).

I’d be looking for this to be a tight one, which suggests grabbing the points with FLORIDA STATE are the best option.