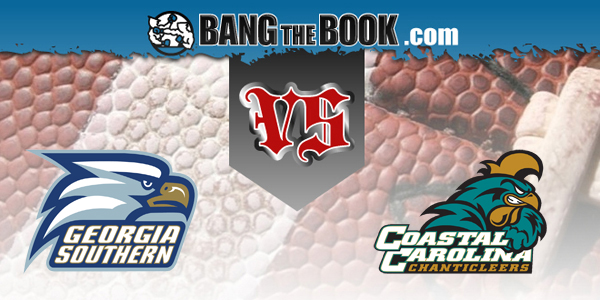 It wasn’t all that long ago that the Chanticleers of Coastal Carolina were playing at the FCS level. In fact, this is only their fourth season playing FBS (Division I) football. But here they are, a month and a half into the season, sitting with a national ranking in both major polls.

We can’t really say if that was the vision of Joe Moglia, the TD Ameritrade chairman who took the head coaching job in 2012. But he’s still watching over things as an executive advisor or some such thing in the athletic department. And he’ll be watching as CCU plays host to the Georgia Southern Eagles in a Saturday game in the Sun Belt, taking place at Noon ET.

And remember that if you are a BetAnySports customer, you are going to have the opportunity to get reduced juice, which will give you a break in the odds, with the chance to place wagers in real time through Sports Betting Prime after the kickoff.

Moglia installed Jamey Chadwell, his offensive coordinator for two years, as head coach, and this season things have fallen right to the extent that the Chants are undefeated, with Sun Belt Conference wins over Arkansas State and Louisiana-Lafayette (30-27 last week), not to mention a victory over Kansas (headquarters of TD Ameritrade, for you trivia buffs) for the second season in a row.

And as of now, they are #24 in the USA Today poll and #25 in the Associated Press poll. ULL had been rated, so the Chants essentially supplanted them.

Georgia Southern won last year’s meeting 30-27, in a triple overtime brawl that was played in a torrential downpour.

in the college football odds that have been posted on this game at BetAnySports, the Chanticleers are laying points:

Coastal Carolina runs a spread option, which is something Chadwell brought in. And you need a dynamic trigger man to get the most out of it, so the Chants are lucky to have Grayson McCall. The redshirt freshman is a 68% passer with a robust 10.7 yards an attempt and a nifty 11-1 TD-INT ratio.

Georgia Southern has a heavy option look, so unlike McCall, Shai Werts is a guy who throws the ball rather infrequently, although 54 attempts in four games is downright high-tech for this kind of offense. Werts also averages 6.8 yards a carry, so he’s a run threat, along with Oklahoma State transfer JD King (423 yards).

At 280 ground yards per game, the Eagles are fourth best in the nation. They run the ball 77.4% of the time.

Sometimes, to use a boxing analogy, when a couple of sluggers get together, it’s not a matter of who’s the better pitcher, but rather who’s the better catcher. And Coastal Carolina has been pretty generous when it comes to defending against opposition ground attacks, allowing 5.2 yards per carry. Last week, against the very formidable Ragin’ Cajun ground attack, they yielded almost eight yards a carry (240 on 31 tries), even in the process of victory.

If they do that against Georgia Southern they’re not going to be able to count on enough breaks.

But when you look at the whole thing, CCU is the team with a heck of a lot more balance. We know that GSU offensive coordinator Bob DeBesse has been looking for that kind of thing by introducing more of an RPO look, but there’s a transition of sorts there, and he may have to wait for Werts to graduate to implement that in full.

CCU is already there. They average over 200 rush yards a game, and with McCall, they have a guy who can get it down the field. When he is not dumping off passes to star running back CJ Marable, he averages over 19 a throw. Tight end Isaiah Lively is at 30 yards a reception, and that’s a great weapon.

Coastal has not wasted opportunities either; in 18 red zone trips, they’ve scored 17 touchdowns. They’re the better side here.

BetAnySports really brings college football betting to life. They give you reduced juice for a great break in the odds, and then, if you really want to take the action to another level, Sports Betting Prime enables real-time wagering…….. There are lots of ways to open up an account; use your debit card, credit card, person-to-person transfers or the virtual currency of Bitcoin, which is fast and easy with their automated system, and NEVER incurs a transaction fee!