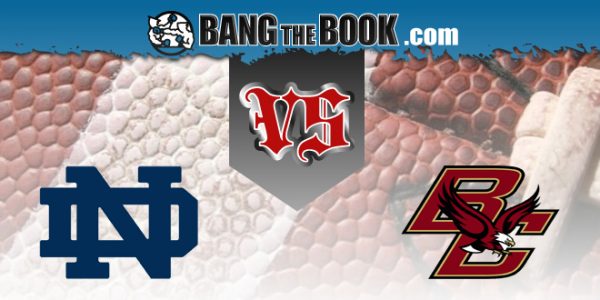 Sure, there’s a built-in excuse for Clemson for last week’s failure at South Bend, but the truth of the matter is that the Tigers did not deserve to win that game. Ian Book was sensational, with 310 yards passing and 67 more on the ground. And now the Irish – after this game – has North Carolina (after a bye week), Syracuse and Wake Forest between them and an undefeated season and certain berth in the four-team college football playoff.

Before all this can be realized, however, there is a dangerous opponent that has to be taken care of. Boston College has had an up-and-down season, but they did take Clemson to the limit and pulled a near-upset of North Carolina as well.

There is another “angle” to this as well. If you believe that a guy with “something to prove” can give his team a little something extra, we’ve got a textbook example to put before you.

BC quarterback Phil Jurkovec was a backup to Book at Notre Dame but knew he wasn’t going to be given a chance to win the job, so he transferred over to Boston College. And he is giving new coach Jeff Hafley a boost, in the sense that he is allowing the Eagles to transition from the run-first-second-and third scheme under Steve Addazio to a more dynamic attack. He’s completed 62% with a nice 15-4 ratio of TD’s to INT’s.

Unlike the claptrap you hear from a lot of other players who have been in similar circumstances, Jurkovec does not downplay his frustration, which bordered on bitterness, from not being able to play at Notre Dame. “It was tough, I’ll say that…..I was debating about switching positions. I don’t think I could have done another year sitting [on] the bench.”

And then there are yet more angles. Revenge is a big motivator for BC; last season they got pummeled 40-7 at South Bend, with a near-obscene 501-191 deficit in yardage. Of course, with 63 yards through the air, the Eagles were a lot more helpless at the time.

It is only natural that there be a “letdown alert” for Notre Dame here, as they are coming off the biggest win in the recent history of the program – one that vaulted them into the #2 spot in the polls (behind Alabama). In point of fact, letdowns seem to be customary for teams that have faced Clemson, as they are 0-6 against the spread in the next game.

One has to always be on the lookout for a potent underdog, and in this particular instance, Boston College has a pretty good recent history, covering 14 of their last 19 games in which they have been catching points. And perhaps it should be mentioned that the last time the Irish beat a team ranked #1 in the country was 1993, when they defeated Florida State, and then they turned around the next week and were shocked by BC 41-39.

Notre Dame coach Brian Kelly insists that his team has more speed on defense than the other teams he’s had in South Bend, and you cannot come away not impressed by the fact that Book has thrown only one interception in 189 attempts. But rest assured that if the Irish are missing any degree of focus, this is a team that can slip through the back door. We’ll take the points.

BetAnySports makes every Saturday a special one in college football! With reduced juice you’re going to receive tremendous value, and Sports Betting Prime allows you to place wagers in real time while the game is in progress……. Make deposits with credit or debit cards, person-to-person transfers or the virtual currency of Bitcoin, which is fast and easy with their automated system and NEVER incurs a transaction fee!