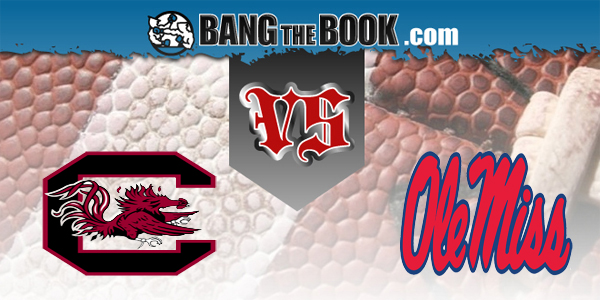 When a line just keeps going and going and going, you have to decide whether or not to play back at it. The spread for South Carolina vs. Ole Miss has been a runaway train as one of the few SEC games actually slated to be played in Week 11. The Rebels are up to as high as -13.5 at some offshore sportsbooks and are sitting at -13 at MyBookie and Bovada.

Using sportsbooks to determine sharp and public sides can be an important part of the process. As a general rule, places like MyBookie and Bovada get a lot more public money than some of the other books in the business, so their lines are usually shaded on favorites and underdogs. When you see global markets like Pinnacle with a higher line, you know that sharp money is the catalyst behind a line move without a doubt.

Frankly, a 6+ point line move, like what we’ve seen here, is generally a good indicator as well. Still, the nature of this line move has been a stunner, as we wouldn’t expect oddsmakers to get a game this wrong this late in the season for a conference that has been playing with regularity.

So, what’s the story? What’s happening with these two teams that would incite such a massive move? Let’s find out.

As reported by FootballScoop on Friday, athletic director Ray Tanner’s hands seem to be tied. The Gamecocks, who have had the misfortune of playing one of the toughest schedules in college football the last few seasons, are spinning their wheels. They’re stuck in the mud and they can’t seem to get out on their own.

Will Muschamp and his assistant coaches would be owed a ton of money in buyouts, with the reported number upwards of $30 million. It hasn’t worked out with new offensive coordinator Mike Bobo, as the Cocks have garnered just 5.23 yards per play, which ranks 91st in the nation. Bobo’s signal caller at Colorado State, Collin Hill, won the job over incumbent Ryan Hilinski, and has not played well with a 58.8% completion percentage and a 5/5 TD/INT ratio.

The Gamecocks have been moderately effective running the football with Kevin Harris and Deshaun Fenwick, but they haven’t used emergency QB/WR Dakereon Joyner effectively and suffered a big loss before the season with stud prospect Marshawn Lloyd’s torn ACL. Shi Smith has 43 of the team’s 108 receptions.

Hilinski was reportedly going to take over for Hill for this game, so we’ll see how that plays out, but the betting markets seem unconcerned. Hilinski had an 11/5 TD/INT ratio with a 58.1% completion percentage as a true freshman last season.

South Carolina’s problems aren’t just on offense. The defense has allowed 6.23 yards per play and just allowed 7.4 yards per play in the loss to Texas A&M. Opponents have converted 45% of their third down attempts and have 15 plays of 30 or more yards.

The Ole Miss offense has moved the ball at will under first-year head coach Lane Kiffin. The Lane Train went from Boca Raton to Oxford and the Rebels have been one of the country’s more interesting teams to follow this season. Ole Miss went up and down the field on Alabama earlier this season, though they also gave up 63 points.

The Rebels may be viewed as a positive regression candidate in the minds of most. They are a 2-4 team, but with a -16 point differential. The Rebels are tied for ninth in plays of 30+ yards with 22 and have gotten huge production from Matt Corral with a 72% completion rate and an 18/9 TD/INT ratio. Elijah Moore has 61 catches for 829 yards, accounting for 44% of the team’s receptions and 42.4% of the team’s receiving yardage.

What is most interesting about the line move is that the Ole Miss defense is terrible. They rank 120th nationally in third down defense, as opponents have converted over 57% of their attempts. They’ve allowed over seven yards per play. Opponents have scored 23 touchdowns on 30 red zone trips, which ranks 106th in TD% in the red zone.

Going against significant sharp money like this is a really scary proposition, but it is hard to believe that a line could be off that far. The total on this game is 70.5 and it does stand to reason that both teams will put up points. South Carolina’s offense could get a shot in the arm from Hilinski and Ole Miss should shred South Carolina’s defense, as several teams already have this season.