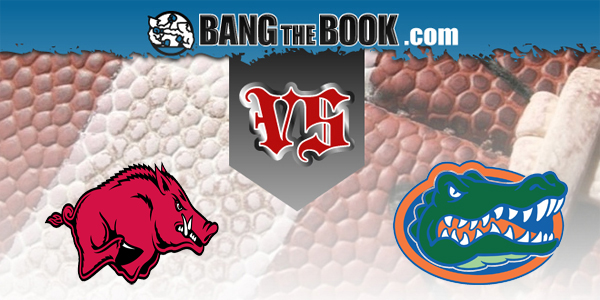 If you wanted to use a pointspread as a barometer to determine whether a team has exceeded what was expected of it, then Sam Pittman has done a heck of a job in his first year as head coach of the Arkansas Razorbacks. His team is a perfect 6-0 against the number, and although we’re not sure they’re going to get to a bowl game, they have nonetheless proven many of the naysayers wrong.

In the current context, last week’s win against Tennessee was a step forward. But after that game, Pittman felt some back aches and then two days later was tested positive for COVID-19. So he will have to sit out this game.

Well, if his team can somehow make do without him, they can make a little noise in the Swamp. The Hogs’ defensive backfield has been opportunistic (12 INT’s – best in the nation), and if they can flip the field once or twice, they can keep this thing reasonably close.

And then, of course, there is the back story. In this case it is Feleipe Franks, who was the starting quarterback at Florida, and in fact won the Offensive MVP award at the Peach Bowl two seasons ago. You know how coaches sometimes say that a player can’t lose his job because of an injury? Well, not always. Franks suffered an injury last season and saw himself being replaced by Kyle Trask, who went on to throw 25 touchdown passes, establishing himself as one of the top QB’s in the SEC.

In fact, it wasn’t likely that, barring injury, Franks would have been #1 again for coach Dan Mullen, because right now Trask leads the nation with 22 touchdown throws.

Sensing the writing on the wall, and fearing that he might never get another opportunity, Franks elected to go into the transfer portal and wound up at Arkansas, where he has put together some nice numbers, including a ratio of 14 TD passes to just three interceptions. In the process he is catching the eye of NFL scouts, and there appears to be little doubt that he will get his opportunity to at least audition at the next level.

It’s not like there is a lot of bitterness involved in this scenario. Franks left on good terms, and his ex-teammates love him. Gators quarterback coach Brian Johnson contends that he is “like family,” as he told reporters. Mullen also has great affection for him, and maintains that Franks helped “build a foundation” for the program during tough times.

Franks, for his part, says “I love all those guys on the staff and the players.” The problem for him wasn’t with the program. It was impatient fans who made him the object of some scorn.

Remember that Florida, which has a realistic path to a 9-1 record and legitimate contention for the “Final Four,” is coming off a supercharged effort last Saturday when the Gators beat traditional rival Georgia, so a letdown and flat performance would not surprise us too much. We can take the points with ARKANSAS.

BetAnySports makes every Saturday a celebration of college football, and they do that by giving you greater value! Try reduced juice and avoid having to lay the standard -110 on gridiron action, and then place wagers in real time with Sports Betting Prime……. Deposits can be made with debit card, credit card, person-to-person transfers or Bitcoin, so there’s no reason you shouldn’t be in on the action!