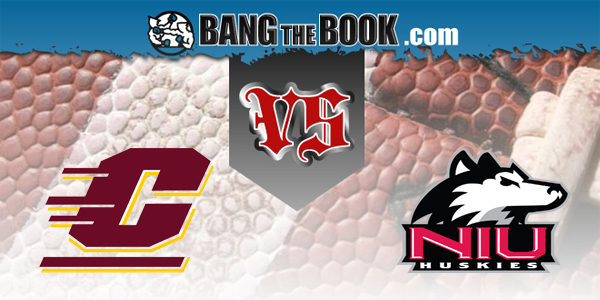 Central Michigan benefits from the leadership of Jim McElwain, who has had previous stops at Colorado State and Florida. In his first season, he brought the Chippewas from a 1-11 record to 8-6 and on the verge of winning the MAC title (they lost to Miami-Ohio in the championship game), after which they got a bid to the New Mexico Bowl (dropping a 48-11 decision to San Diego State).

They started out this season behind the eight-ball in a sense, as quarterback David Moore did not win his appeal to the NCAA over a banned substance suspension, so he will sit out five games. And ex-QB Tony Poljan, who had developed into quite a tight end, transferred to Virginia.

Daniel Richardson handles the QB chores for now. He came into the season with just three passes under his belt, but the redshirt freshman threw for 243 yards in the opener against Ohio. Other weapons are holding up okay, including Kobe Lewis, who is off to a running start with 112 yards on the ground (and two TD’s). They like Richardson as a seat-warmer until such time as Moore returns, and even with the loss of Poljan, there is wideout Kalil Pimpleton (82 catches last year) to help out.

This is a defense that is going to stop some people. It was the second-ranked unit in the MAC last season, and the secondary is loaded with returnees. This is a defensive front that tackled opponents for a loss at a more frequent rate than any other team in college football last season. And linebacker Troy Hairston, who makes for a pretty good combo with All-MAC LB Tony Brown, exploded with three sacks against Ohio.

Northern Illinois really let things get away from them in their conference opener, with five turnovers in a 49-30 defeat to Buffalo. Ross Bowers, a transfer from Cal, is behind center, and we’re not sure if this offense can rise beyond the level of last year’s mediocrity (22.9 ppg) with him at the controls.

They’ve got some capable receivers in Tyrice Richie and Cole Tucker, But they may struggle to produce something on the ground. That was the case last season, when they ranked just 92nd in the nation. Head coach Thomas Hammock was once the running backs coach with the Baltimore Ravens, but he needs more personnel to work with.

This is a revenge game for the Huskies, as Central beat them to death last season (48-10). Extracting that revenge is another issue entirely. NIU has five freshman starters on defense, so this is likely to be a work in progress.

From the technical standpoint, the Chips have edges. For one thing, they have covered six straight meetings in this series. For what it’s worth, CMU has also bested the pointspread in 12 of the last 15 instances in which they have been a road favorite.

Central Michigan gives us the impression of a team that is trending “up,” and Northern Illinois may be stuck in neutral. Bowers has a lot of snaps under his belt – he is, in fact, a sixth-year senior – but a ratio of eight TD’s to nine INT’s since the start of 2019 won’t get the Huskies anywhere. So we’re going to go ahead and lay the points.

BetOnline is right on top of MACtion during the week, and of course they will take you right through the weekend in college football…….. Odds Booster also offers you fantastic payouts on pre-selected parlays every day of the week……. Open an account today, and remember that you can use all kinds of cryptocurrencies, including Bitcoin!