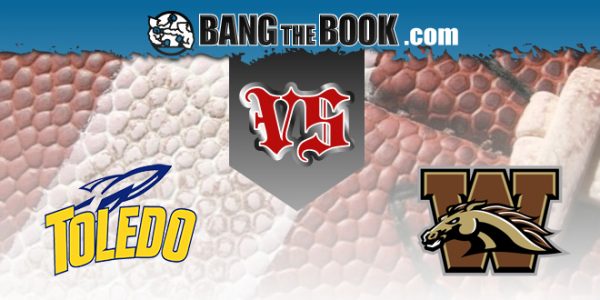 The Toledo Rockets need to climb back up to some level of prominence in the Mid-American Conference. Last year was a downer; they were 6-6 and did not go to a bowl game. That was the first non-winning season for this program in the last ten years.

They were dominant in the MAC opener, although they played a severely outclassed Bowling Green side in the 38-3 laugher. Eli Peters had the most experience in the three-way QB battle, and he did just fine for himself, with four TD passes and 67 yards on the ground. It was easy pickings for the defense, as the Rockets held BGSU’s Matt McDonald to a dismal 6-for-30 passing.

That is not going to work for an opponent on most occasions, but by the same token Toledo is not going to encounter such little resistance often either. And it remains to be seen whether this comes close to a true indication of what this top unit can do, considering they didn’t stop much last season (allowing 475.7 ypg – 123rd in the nation). With seven starters back on that side, there is little doubt that they’re somewhat better.

Corralling WMU’s Kaleb Eleby is probably a different story for them altogether. Having subbed for Jon Wassink a couple of years ago, he redshirted last season and was ready to take over when Wassink graduated. He was 12 of 16 for 262 yards and three touchdowns in the opening 58-13 romp over Akron. D’Wayne Eskridge is an explosive element; he caught a 76-yarder and had 121 yards in returns. And he’ll have to be a focus for the Toledo secondary.

WMU, coached by Tim Lester, got to the First Responder Bowl last season, losing in a 23-20 heart-breaker to Western Kentucky. They actually had an opportunity to win the MAC West, but they somehow went flat against a Northern Illinois team that was so banged-up it practically didn’t have anybody left.

For them to get back to a postseason game, they will have to come up with a viable solution to replacing what running back LeVante Bellamy gave them last year. With a veteran offensive line (four starters) back, they have some structure to work with. Sean Tyler leads their “committee” effort, which produced 180 yards against Akron.

Defense is another question, and although this team may be tougher to run on this season, we’d have to say the jury is still out. If they are a little soft up front, they could be exploited by Toledo’s Bryant Koback-Shakif Seymour combo.

In fact, that was very much the case last season, as Toledo won a 31-24 decision over WMU in the Glass Bowl behind 275 rushing yards.

Yeah, it’s payback, but the matchup here may be difficult for the Broncos. At the same time, WMU may be in a position to win a shootout. One thing that sticks out at us is Toledo’s performance (or lack of same) when they take it on the road, as they are currently on streaks of 1-9 straight-up and 1-8 against the spread) playing the role of the visitor. So let’s take a chance with Western Michigan.

BetOnline is right on top of MACtion during the week, and of course they will take you right through the weekend in college football…….. Odds Booster also offers you fantastic payouts on pre-selected parlays every day of the week……. Open an account today, and remember that you can use all kinds of cryptocurrencies, including Bitcoin!

BET COLLEGE FOOTBALL WITH A 100% DEPOSIT BONUS AT BETONLINE SPORTSBOOK