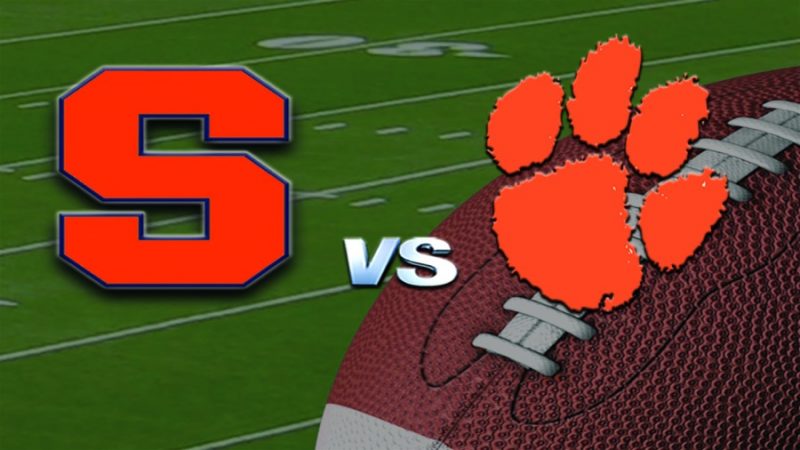 The college football betting action continues Friday, October 15, 2021, with the Atlantic Coast Conference showdown at Carrier Dome in Syracuse, so we bring you the best Clemson Tigers vs. Syracuse Orange betting pick, tips, and odds.

The Tigers are firm 14-point road favorites on BetDSI Sportsbook, searching for their fourth straight victory over Syracuse. The Orange are +460 moneyline underdogs, while the totals sit at 45.0 points.

The Clemson Tigers are undoubtedly the biggest disappointment of the 2021 CFB season. Through their first five outings, Dabo Swinney’s boys have been awful on the offensive end, averaging only 21.2 points per game (112th in the country) on 147.4 rushing yards (84th) and 176.8 passing yards (tied-113th).

Sophomore QB D.J. Uiagalelei has been a disaster thus far, completing just 54.4 percent of his passing attempts. He’s tossed for 793 yards, three touchdowns, and three interceptions. Sophomore RB Kobe Pace leads the backfield with 39 carries for 218 yards and a couple of scores, while junior wideout Justyn Ross has 23 receptions for 231 yards and three touchdowns.

The Syracuse Orange (3-3; 5-1 ATS) are coming off a tough 40-37 overtime loss to No. 19 Wake Forest this past Saturday, covering as 6-point home underdogs. It was their second defeat on the spin, as the Orange suffered a 33-30 loss at Florida State in Week 5.

Syracuse battled bravely against the Demon Deacons. The Orange racked up 514 total yards and 33 1st downs while surrendering 426 total yards and 21 1st downs to Wake Forest. Sophomore QB Garrett Shrader carried the pigskin 29 times for 178 yards and a TD and completed 15 of his 27 passing attempts for 160 yards and a couple of scores.

Interestingly, the Orange are winless in nine consecutive games against the ACC, but they’ve gone 6-3 ATS in that stretch. Syracuse has been terrific against the spread as of late, so I’m backing them to cover a 14-point spread in this one.

The Orange are a run-heavy side and will have a tall task to outplay the Tigers’ top-notch defense. On the other side, I’m expecting Clemson to continue with an anemic offensive performance, and the Orange have been solid defensively so far this season.

The under is 6-2 in Clemson’s last eight games overall, and it is 4-1 in the Tigers’ last five encounters with the Orange. Also, four of Syracuse’s last five games played on Friday went in the under.

I’ve mentioned the Tigers’ offensive woes. Clemson leans on its stout D and should slow down Syracuse’s ground game. Both teams should run as much as they can, so I’m taking the under on the totals as my best Clemson vs. Syracuse betting pick.