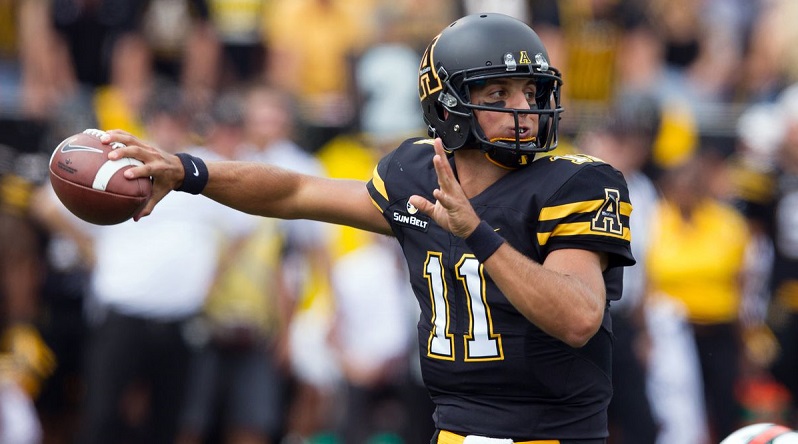 Week 7 of the 2021 college football season kicks off Tuesday, October 12, with the Sun Belt Conference showdown from Cajun Field in Lafayette, Louisiana, so here’s the best Appalachian State vs. Louisiana-Lafayette betting pick.

The Mountaineers visit the Ragin’ Cajuns for the first time since 2019. App State has won eight of its previous nine meetings with Louisiana, and the Mountaineers opened as slight 3-point favorites for Tuesday’s clash. The totals are listed at 55.5 points on BetOnline Sportsbook.

App State dominated the Georgia State Panthers in Week 5 and easily covered a 10-point spread on the road. The Mountaineers racked up 502 total yards and yielded 380 in a return while forcing three turnovers. Chase Brice completed 20 of his 28 passing attempts for 326 yards and three touchdowns, so senior QB now has 1,360 yards, eight touchdowns, and three interceptions on the season.

Louisiana-Lafayette looks for its fifth win in a row

Back in Week 5, the Ragin’ Cajuns narrowly defeated the South Alabama Jaguars as 12-point road favorites. They nearly blew a 20-point lead, failing to score in the second half and finishing with only 283 total yards. Senior QB Levi Lewis completed nine of his 20 pass attempts for 49 yards, while freshman RB Emani Bailey led the way with seven carries for 81 yards and a TD.

Both teams have played in excellent form over the last two years. The Ragin’ Cajuns have dropped only one of their last 12 games overall. On the other side, the Mountaineers are 12-3 straight up over their previous 15 outings at any location.

App State looks like a better offensive team in this matchup, so I’m backing the Mountaineers to win and cover a 3-point spread. Also, the Mountaineers’ run D has done a good job so far this season and should be able to slow down the Ragin’ Cajuns on the road. We should see a hard-fought battle, as four of the last five encounters between App State and Louisiana-Lafayette were decided by ten or fewer points.

The under has hit in seven of the last nine meetings between these two schools, and it is 4-1 in their previous five encounters. Four of their last five dates produced fewer than 50 points in total, and I’m expecting more of the same Tuesday at Cajun Field.

Over their last four showings, both App State and Louisiana-Lafayette have held their opponents below 26 points.