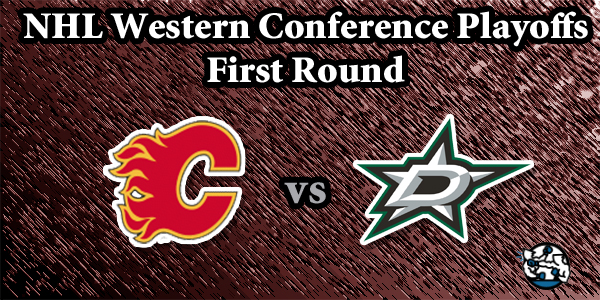 The series between the Winnipeg Jets and the Calgary Flames was ultimately going to come down to one thing. Would Connor Hellebuyck be good enough to drag the worse team into the next round? Despite his best efforts, the answer was no. That meant that the Flames moved on and it turns out that their first round opponent is the Dallas Stars.

The Stars did not really play well in the Round Robin games. They were outscored 6-2 at 5-v-5 and it was the same story it had been all season long. They didn’t generate enough goals or premium scoring chances. That was actually a problem that plagued the Calgary Flames most of the season, too.

So, we’ll probably be looking for some low-scoring affairs here with two teams that don’t generate a lot of offense, but we’re also looking at what should be a decent goaltending mismatch in the series. It should make for a fun one to handicap, even though the games might lack the excitement of some of the other series.

All of the games will be played in Edmonton, but the all-important last line change will be alternating 2-2-1-1-1 as it always does. The Game 4 start time will be a little bit of a weird one for the teams after late starts on Thursday and Friday with back-to-back games, so that may be an angle that you want to watch early in the game.

The Flames were clearly the better team in their Qualifying Round Series with the Jets. They found some offense and scored 16 goals over the four games. They scored five of those 16 goals on the power play. Even though Calgary seems to do really well offensively, the Jets actually had more scoring chances in the series. From an advanced metrics standpoint, Winnipeg was probably the better team, but Calgary scored those five power play goals to Winnipeg’s two and the Flames also added a shorthanded goal.

It would seem that the Flames just ran into a decent matchup for their mediocre offense by playing a team that generated even fewer quality offensive during the regular season than they did.

Cam Talbot was also excellent in the series. He stopped 104 of 110 shots. He was the better option during the regular season and it was good to see Talbot get the nod over David Rittich. Talbot rewarded that decision and even pitched the Game 4 shutout to finish out the series. It was a big bounce back season for Talbot, who was one of the league’s worst goaltenders last season with a -18.14 GSAA. He was at 7.53 this season, so not only was he above average, but he was well on the plus side. It was a throwback season to when he finished fourth in Vezina Trophy voting back in 2017.

That speaks to the structure and the style of play for Calgary relative to what Talbot had in front of him with Edmonton. That also speaks to what we can expect in this series. The Jets managed just 27.5 shots on goal per game. They didn’t create a lot of quality opportunities.

The Dallas Stars ranked seventh in high-danger scoring chances for at 5-v-5 during the regular season, but somehow ranked second-to-last in 5-v-5 goal scoring with 108. Only Detroit was worse and we all know how epically bad they were this season. On the plus side, even though Dallas didn’t score a lot, the Stars were second to the Bruins in fewest 5-v-5 goals allowed. They allowed the seventh-fewest high-danger scoring chances.

It is not a sexy brand of hockey by any means, but it is pretty effective. Will it be effective in the NHL Playoffs? It could be. Scoring has been depressed since play returned, as the under was on a remarkable 24-4 run before leveling off slightly as the games moved forward.

The Stars were 28th in goals scored, but second in goals allowed. Not much changed when Jim Montgomery was let go and Rick Bowness took over. Leading scorer Tyler Seguin only had 50 points. Denis Gurianov was the only player to reach 20 goals. But, the Stars relied heavily on goaltenders Ben Bishop and Anton Khudobin. Both guys were excellent as Bishop had a .920 SV% and a 2.50 GAA and Khudobin had a .930 SV% and a 2.22 GAA.

More importantly, Bishop was at 13.29 on goals saved above average and Khudobin was at 17.75. Bishop missed the last game of Round Robin play due to an undisclosed injury. It would seem that Bishop is the first choice, and maybe he will be the right one, but Khudobin is also very capable if called upon.

This profiles as a long, drawn-out, low-scoring series. Dallas is the better team with the better goaltending, but they don’t create a whole lot of high-percentage offensive chances and they don’t capitalize on the ones that they do. Special teams could very well decide this series because goals at 5-v-5 will be hard to come by with these two teams.

If that ends up being the case, Calgary gets the edge. As a result, a long series is very much a possibility. When all is said and done, Dallas has the better goaltending and that’s the difference for me.

SHOOT FOR THE STARS AT BETONLINE IN THIS SERIES