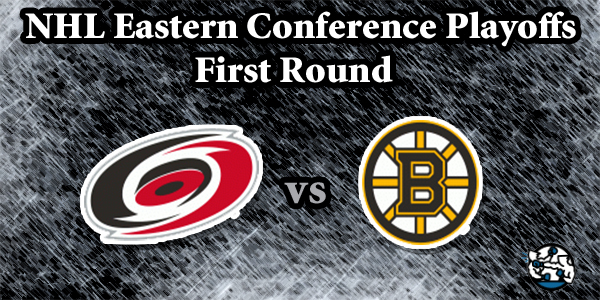 The Boston Bruins looked like they could not have cared less about the Round Robin tournament for seeding. As a result, they draw arguably the most dangerous of the Qualifying Round teams in the Carolina Hurricanes. The Hurricanes swept a trendy upset pick in the New York Rangers right out of the playoffs in short order.

This might be the most interesting handicap of the first round. Do we let these three recent games we saw overshadow how great Boston was in the regular season? They were 44-14-12 and the only team to reach 100 points. They felt slighted by having to play these games for seeding when they were eight points clear of anybody else in the Eastern Conference.

Can they flip that switch? Do we get the Bruins from October through February in the month of August? Or do the Hurricanes, a team that wasted no time getting into mid-season form, advance to the second round?

The Hurricanes won their series so fast that they actually will have a week off between games. A week in the bubble with nothing to really do except practice, lounge by the pool, and golf may have taken some of the edge away from their game. It might put them on more equal footing with the Bruins.

One of the major talking points of the first round is how much playing those games for your postseason lives carries over and how much of going through the motions in the Round Robin carries over. I guess we’ll see on Tuesday night.

Also, that Saturday start time is quite an interesting one, eh?

Only 20 were for the Rangers and that was the big difference. Carolina got the higher-quality looks and took advantage. Some will point to the play of Henrik Lundqvist as the difference in the series when Igor Shesterkin was deemed unfit to play in Game 1 and Game 2, but Lundqvist, who was not good during the regular season, wasn’t the only problem. He was actually a small problem compared to New York’s lack of finish and poor power play efforts.

The main focus in this series should be Carolina’s smaller margin for error. The Rangers were a deeply-flawed team that became a hot commodity because of how Shesterkin played just before everything shut down. There have also been questions for Carolina with James Reimer and Petr Mrazek. Mrazek was -5.35 goals saved above average during the regular season with just a .905 SV%. He wound up playing well in Game 1 and Game 2.

It was a bit surprising that head coach Rod Brind’Amour went to Reimer in Game 3 when Mrazek had been so good, but Reimer stopped 37 of 38 shots and looked sharp. Brind’Amour has yet to name a Game 1 starter for this series. The smart money is probably on Mrazek, since he got the first nod in the Qualifying Round, but Reimer played better during the regular season.

You’ve heard it ad nauseam in the betting world. Do not overreact to what you’ve most recently seen. If you were grading the Boston Bruins based on their Round Robin play, you would say that they don’t even deserve to be a playoff team. They scored four goals 5-v-5 and allowed eight. That was a huge departure from the regular season when they were +36 in 5-v-5 scoring. They weren’t the most prolific 5-v-5 offense, as they tied for 16th in goals for, but they allowed the fewest 5-v-5 goals in the league.

Nothing that happened in the Round Robin, where the Bruins power play went scoreless, should creep into your handicap about this series. There is a case to be made that the Bruins may start slowly against a team that hit the ground running, but Boston was maybe the best team in the NHL during the regular season.

Tuukka Rask was one of the league’s top goaltenders during the regular season with a .929 SV% and a 2.12 GAA. He posted a 22.51 goals saved above average mark, which was among the best in the league. He played fine in the Round Robin, but the Bruins were moving guys in and out of the lineup and tried to figure out some different things with line combinations and whatnot. They had absolutely no interest in those games and Rask still played well and didn’t face a whole lot of high-percentage shots.

The Bruins barely cared in the Round Robin and still had more scoring chances than the opposition. They had more high-danger scoring chances. They went through the motions in every way, shape, and form. Rask got to make some saves and some guys got to knock off some rust.

Rask could very well be the big difference in this series. He’s a better goaltender than either option for the Hurricanes. Boston’s suffocating defense at 5-v-5 against the high-danger scoring chances of the Hurricanes is another focal point. Boston did have 125 fewer high-danger chances than Carolina at 5-v-5. Boston still scored more goals. They also had the second-best PP% in the league.

Carolina will give Boston a series. The Bruins may have screwed up by not taking the Round Robin seriously at all. Rask and the defense will be the difference, but it could take a while to get there.

BACK THE BRUINS AT BETONLINE SPORTSBOOK