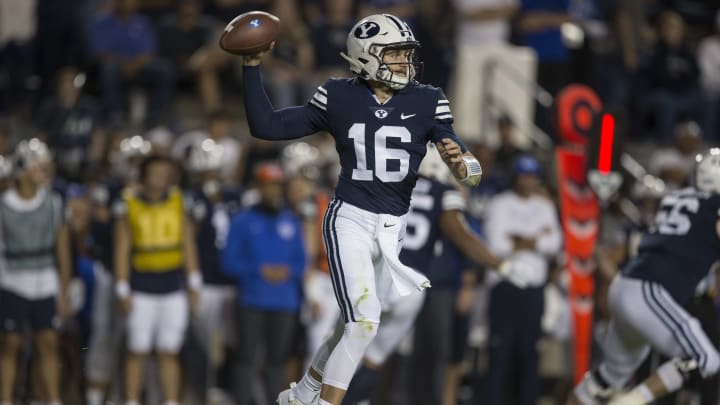 The first day of October brings three exciting games around the country, including the non-conference clash between the No. 13 BYU Cougars and Utah State Aggies, so we’ve prepared the best college football betting pick and odds for Friday night.

BYU meets Utah State for the first time since 2019 when the Cougars trashed off the Aggies as 3-point road underdogs, 42-14. The visitors are listed as 9-point road favorites for Friday’s game in Logan, Utah, while the totals sit at 61.5 points on BetOnline Sportsbook.

Last Saturday, the Cougars nearly blew a 22-point lead, allowing USF to score three touchdowns in the second half. Their backup QB Baylor Romney tossed for 305 yards and three touchdowns, while sophomore RB Taylor Allgeier had 15 carries for 86 yards and a couple of scores.

Sophomore QB Jaren Hall sat out Week 4 due to an injury and is questionable to play Friday against the Aggies. Through the first three weeks, Hall has thrown for 561 yards, seven touchdowns, and a couple of interceptions. The Cougars are racking up 387.5 total yards per contest (76th in the country) while surrendering 388.0 in a return (77th).

The Aggies suffered a heavy loss in Week 4

The Utah State Aggies (3-1; 3-1 ATS) are coming off a 27-3 home loss to the Boise State Broncos this past Saturday. It was their first defeat in 2021, as the Aggies accounted for only three points on 443 total yards, struggling mightily against the Broncos’ defense that forced three turnovers.

The Cougars are certainly a better team than Utah State, especially on the defensive end. However, they are banged up and could miss their starting QB, though a couple of offensive linemen will return Friday against the Aggies.

Utah State possesses enough offensive firepower to keep it close. The Aggies will be fired up to prove their worth following that heavy home loss in Week 4, and they’ll hopefully manage to slow down the Cougars’ offense that hasn’t impressed so far this season.

The under is 6-1 in BYU’s last seven games overall, and it is 5-3 in Utah State’s previous eight outings at any location. On the other hand, five of the previous six encounters between the Cougars and Aggies went in the over.

Five of those six H2H duels produced more than 61 points in total, so I’ll ride this betting trend Friday. Also, I’m expecting a bounce-back performance from the Aggies’ offense after a poor display in Week 4.