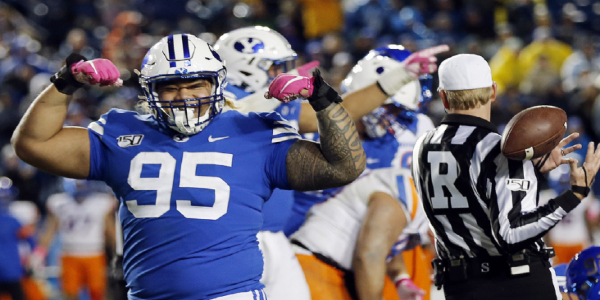 Do the BYU Cougars have the ability to hold off the triple option? Can the Navy Midshipmen replace one of the great option quarterbacks of recent years? These are just two of the questions on the minds of college football bettors at BetOnline in advance of the Labor Day matchup between the two, which takes place on Monday night at Navy-Marine Corps Stadium in Annapolis. Game time is 8 PM ET, and it will be televised on ESPN. As of now, the brigade of midshipmen will not be allowed to be in attendance, despite a recent appeal to the state of Maryland.

BYU has really had to revamp its schedule. As an independent, it’s hard enough to get opponents, but teams like Utah, Michigan State, Minnesota, Arizona State and Missouri are off the slate, with Western Kentucky, Army, Texas State, Troy and Texas-San Antonio added. Also, the game with Navy was a natural, as Notre Dame, because of an ACC commitment it had made, canceled a game with the Middies.

BYU was wildly inconsistent last season, beating formidable opponents like USC, Utah State and Boise State, while losing to Toledo and South Florida. And they lost to the host team in the Hawaii Bowl.

Navy finished 11-2 last season, whipping Army in the annual rivalry game and then beating Kansas State in the Liberty Bowl. They were nationally-ranked. But that was with Malcolm Perry at quarterback, and he set an FBS record for a QB with 2017 rushing yards (that was second in the nation). Noiw Perry’s gone, and the Midshipmen, who have also lost a number of running backs for various reasons, have to come up with a viable triple option without the benefit of spring practice.

BYU’s intention was to go with a four-man defensive front this season, with the flexibility to use a 3-4 from time to time. They may need that three-man front against the Navy option, but defensive coordinator Itaisa Tuiaki hasn’t faced off against a triple option before.

In the college football betting odds posted on this game by the folks at BetOnline, BYU is now a favorite after opening up as an underdog:

Don’t forget that you can get greatly enhanced payouts on pre-selected parlays with Odds Booster!

When you look at BYU, you see the signs that this offense may suffer from some of the same ills it had last season – that is, a running game that doesn’t exactly jump out at you, a receiving corps that is somewhat uninspiring, and quarterbacking that is inconsistent. Even when healthy, Zach Wilson has given no indication of being what the Cougars thought he’d be when they signed him as a touted high school recruit.

They will once again do “running back by committee,” especially as De Vonta’e Henry-Cole, who transferred from Utah, moved on to Utah State. Gunnar Romney (31 catches, 377 yards) is the best returning wideout, but losing tight end Matt Bushman – one of the best at his position in the country – to an Achilles injury is a big blow. This does not look like a unit that is “explosive,” and we say that even knowing that they have a couple of All-America candidates (Brady Christensen, James Empey) on the offensive line. They had a hard time in the red zone last year too, scoring points on only 73% of their trips (that was 120th in the nation).

Speaking of “explosive,” that is precisely what Navy was in 2019, as 17.8% of their plays fit that category (that was tops in the country). But that was with Perry at the helm, and he was a huge playmaker. They are likely going with Dalen Morris at quarterback, because he is the senior on board. Navy coach Ken Niumatalolo has been shuffling things around in the backfield; some players got injured, others opted out due to COVID-19. Jamale Carothers (734 yards, 14 touchdowns) is the top returnee, but there is no guarantee the Middies are going to be automatically cohesive. Let’s not forget that before Perry became the option QB on a full-time basis, the Midshipmen went 3-10 in 2018.

It’s always tough to prepare for a n option attack, because you simply can’t replicate the speed and timing that you’re going to see in a real game. But the Cougars may have a chance to slow things up a bit. With nose tackle Khyiris Tonga, they’ve got a good head start (assuming they can play some three-man fronts). They are getting healthier in the secondary with the return of Zayne Anderson and Chris Wilcox. And they have a very good group of linebackers.

Navy’s defense wasn’t bad last season, allowing just 105.8 rushing yards per game, tenth best in the country. It is true that the Middies, who blitz a lot, could potentially get burned on a big play or two. But BYU isn’t necessarily going to be reliable moving the ball, especially with Bushman out. We appreciate what each side can do, but the defenses may be ahead of the offenses at this point. UNDER

BetOnline brings you into the college football season with a flourish, as you can wager on all of the numbers, get involved with the props, and then bet in real time while the action is happening………. Remember that with Odds Booster, you can get explosive payouts on pre-selected parlays. It’s very exciting……… If poker is something you enjoy, then you need to check out the $2.5 Million Championship Online Poker Series, with 100 events, starting September 7………. Bitcoin is a great way to open up your account. It’s very easy, and the payouts are lightning-fast!