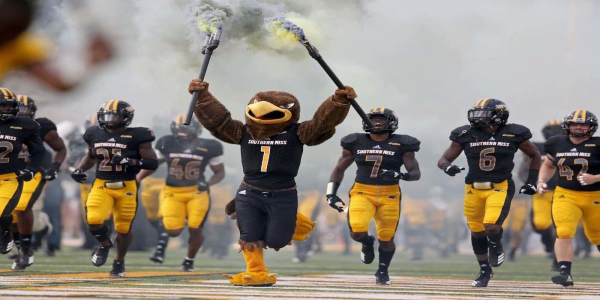 The Southern Miss Golden Eagles are coming off a so-so season where they finished 7-6 and lost 30-13 to Tulane in the Armed Forces Bowl. At least they were in a better place than the South Alabama Jaguars, who were 2-10 (with just one win over an FBS opponent) and are in a seemingly never-ending process of building a program. BetAnySports customers can see these teams face off against each other on Thursday night at 9 PM ET at M.M. Robert Stadium in Hattiesburg, MS, with CBS Sports Network handling the TV coverage.

Southern Miss is one team that can move it through the air. Jack Abraham threw for 3496 yards last season, and he is among seven starters who come back on the offensive side of the ball. He’s going to have to find someone to be his top target, after Quez Watkins left for the NFL. Maybe it’s Tim Jones, who has impressed everybody during fall practice.

But somehow coach Jay Hopson and and new offensive coordinator Matt Kubik have to figure out a way to move the football on the ground. They are hopeful that Frank Gore Jr., son of the Hall of Fame-bound running back, might be able to step in and make some sort of contribution. He had been headed to Florida Atlantic (FAU), but then de-committed.

If it comes down to stopping the run, the Golden Eagles should be competitive. They led Conference USA in rushing defense, and they still ought to be able to get a pass rush going (39 sacks last season). With a new defensive coordinator (Tony Pecoraro), there should be a few new wrinkles for this rather experienced group (mostly juniors and seniors).

In the college football odds that have been posted on this game by the folks at BetAnySports, Southern Miss is favored:

With South Alabama, there are a lot of question marks. They’ll go with Desmond Trotter at quarterback, and in his defense, he did toss four touchdown passes when the Jaguars beat Arkansas State. If he can’t get the job done , coach Steve Campbell may not be hesitant to turn to Chance Lovertich, who led Mississippi Gulf Coast College to the national junior college title last season.

They’ll miss Tra Minter, who was by far their best offensive player, and that’s a big hole to fill, although if Trotter or Lovertich are on the mark they can find something downfield with returning starters Kawaan Baker and Jason Tolbert, who return to split out wide. Will these USA quarterbacks have time to throw against the USM pass rush? Maybe; this team does bring back four starters on the offensive line.

With addition of Camron Harrell, who originally signed with Iowa and can play safety or cornerback, the Southern Miss secondary might be much improved. On the South Alabama side, we don’t disqualify thye possibility that they could show improvement as well, especially with a n anchor like linebacker Riley Cole, but the Jags surrendered at least 30 points on nine different occasions in 2019.

Our confidence level is much higher with Abraham than it is with whoever might see action behind center for South Alabama. USM looks to be a cut above at the moment; maybe enough to be able to carry this considerable number.

BetAnySports helps you dive right into the 2020 college football season, with great value in parlays odds, props, futures and regular season over-unders……… Don’t forget that you can get reduced juice, as well as Sports Betting Prime, which enables real-time wagers while the event is in progress……… Deposits can be made in a number of ways; with a debit or credit card, person-to-person transfers, and the virtual currency of Bitcoin, which is fast and easy with their automated system, and NEVER incurs a transaction fee!