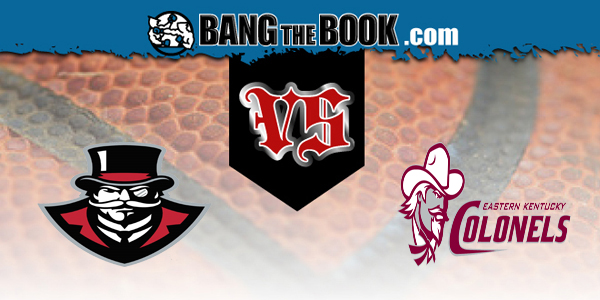 I’d say it was a sister-kissing event last night between VCU and Rhode Island as the spotlight game of the evening. Technically, at time of publish, VCU -1 was the number at MyBookie, but it wasn’t there for long. The game closed much higher when Fatts Russell was ruled out for Rhode Island. The under was good. I think it’s safe to say that the side wasn’t for most people, so we tied on the game, drank some juice, and now we move on to another day.

Of course the spotlight game for most people is Ohio State vs. Iowa. Not us. That’s too easy. We should look at something else. Something off the beaten path a little more. Something like Austin Peay vs. Eastern Kentucky. The host Colonels are favored by three points at Bookmaker Sportsbook with a total of 152 in this Ohio Valley Conference clash and I’ve got a pretty strong opinion on this game.

There has been a changing of the guard in the OVC this season, but not at the top. The top spot is still firmly held by the Belmont Bruins, who are 12-0 going into their game tonight against Eastern Illinois. The changing of the guard is actually with the teams a step below Belmont. A spot that has recently been competed for by a program like Austin Peay.

The Governors were 12-6 in conference play in Matt Figger’s first season back in 2018. They were 13-5 in 2019 and then 14-4 in 2020, but lost to Murray State in the OVC Tournament after splitting with Belmont in the regular season. This season, Austin Peay already has four conference losses. The Governors are awful on defense and have been annually for the most part under Figger, but the offense has taken a step back this season as well.

Austin Peay has ranked 296th, 255th, 316th, and 326th in eFG% defense over Figger’s four seasons. They’ve been no better than 283rd in 2P% defense and actually rank 334th in the nation this season, as opponents are making 57.2% of their two-point shots. Usually, the Governors have had an offense to fall back on. They were 49th in adjusted offensive efficiency per Bart Torvik in 2019 and 85th last season.

This year, the Governors are 143rd in that department. They attack the offensive glass well and get some second-chance points as a result, but they turn the ball over too much and don’t make enough three-pointers. Fortunately, Austin Peay only ranks 241st in 3P Rate at 35.1%, so their inability to hit threes doesn’t hurt as much as it would some teams.

For the most part, Austin Peay will keep games close. In conference play, they lost to Murray State by 30 in the first conference game, but the other three losses have been by 16 combined points. For as bad as they are on defense, they’ve still found a way to compete.

One of those four conference losses came at home against Eastern Kentucky. The Colonels won 80-75 on the road, shooting 11-of-22 from 3 while the Governors were 4-of-22. That was the difference in the game. Austin Peay was actually 19-of-21 at the free throw line, while the Colonels were 19-of-27. It sure seems like some regression to the mean could be possible in the second game, no?

Anything is possible, and Austin Peay’s balanced scoring attack with five players in double figures seems more sustainable than freshman Wendell Green Jr. dropping 30 on the Governors in the rematch. This is also an Eastern Kentucky team that has won three games in overtime in conference play and also had close wins over Morehead State and Austin Peay. Some might look at some negative regression that regard for EKU.

You have to put this team into the proper context. They play a high-variance style of basketball to begin with. The Colonels play at the third-fastest adjusted tempo in college basketball. They take a lot of threes. Something else they do is create extra possessions. EKU is 49th in TO% on offense, but sixth in TO% on defense. Because opponents are only shooting 30.1% from three, if they fail to take care of the basketball and Eastern Kentucky is making shots, the deficits get bigger.

I want to talk about EKU coach A.W. Hamilton for a minute. Hamilton, who coached Montrezl Harrell, Terry Rozier, Jon Davis, and Naji Marshall at Hargrave Military Academy, inherited an Eastern Kentucky team with 16 conference wins combined over the previous three years. The first season was a transitional one with a 6-12 record in OVC play, but Hamilton’s second season saw a leap to 12-6 and his third season sits at 8-1 now.

The Colonels haven’t played Belmont yet, but swept Jacksonville State, split with Morehead State, and beat Austin Peay in that first meeting. The 40-year-old Hamilton could be a coach to watch in college basketball and he’s orchestrated a really nice turnaround with what was a middling EKU program. This is the best start for the team in over 60 years.

Here we have a pretty classic case of two teams going in opposite directions. Austin Peay’s defensive shortcomings have finally come to a head. Eastern Kentucky, with a new head coach that won a high school National Championship and went 237-22 in six seasons, has put his stamp on the program and has had pretty fast success.

In this game, I don’t think Austin Peay can keep up. They turn the ball over too much and don’t play good enough defense in a game that will feature more possessions than they are accustomed to playing. The first game was played to 77 possessions. No other conference game has seen more than 71. EKU will get the tempo they want and will be at home, where they’ve shot much better than on the road.

It’s Eastern Kentucky for me in this one. I think the line is cheap.