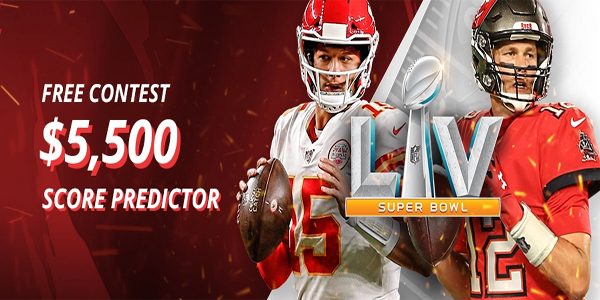 We’ve already highlighted all of the Super Bowl props available at BetOnline Sportsbook and also covered the Free Entry into the Super Bowl Props Contest.

BetOnline has another contest to offer for Super Bowl Week as well. The $5,500 Super Bowl Score Predictor Contest runs up until kickoff on Sunday February 7. This is also a free-to-enter contest with the same stipulation as the prop contest that you have to place $25 in real-money wagers on the Super Bowl. That would be in addition to the $25 to enter the props contest.

The Chiefs are -3 and the total is 56 for the Big Game on Sunday with a 6:30 p.m. ET kickoff. That would put the implied score for the Super Bowl right around 29.5 to 26.5. It might be in your best interest to try something other than 28-24 or 31-28 or something like that because those are going to be really popular numbers based on the side and total.

There are two bits of small print that are really important for BetOnline customers. The first is that you must wager at least $25 on the spread, total, or money line for Super Bowl LV to be eligible to win a prize.

The second is that if you win, you must email contestwinner@betonline.ag by Tuesday February 9 at 11:59 p.m. ET to claim your prize. Title the email “Super Bow Score Predictor Winner” and include your user name in the email.

If you don’t do the second thing, you will not get a prize, even if you nail the score prediction, so make sure you do that if you get it right.

This is a great week to sign up at BetOnline Sportsbook. They have over 1,000 props on the Super Bowl, but the fun doesn’t stop there. BetOnline is an originator by being one of the first to post overnight lines for the NBA, NHL, and college basketball. They also offer a lot of recurring promotions and contests for users.

Bet with the best. Bet with BetOnline.

GET THE SUPER BOWL DEPOSIT BONUS FROM BETONLINE SPORTSBOOK