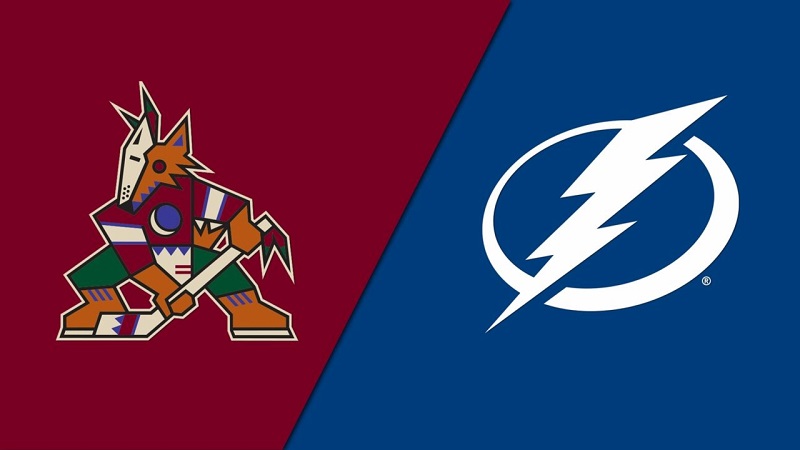 The Arizona Coyotes continue their six-game road trip Thursday, October 28, 2021, with the interconference clash against the two-time defending champions, the Tampa Bay Lightning. These two foes meet each other for the first time since February 22, 2020, when the Yotes smashed the Bolts at home, 7-3.

This time around, Arizona is a massive +264 road underdog on MyBookie Sportsbook. Tampa Bay is a -300 moneyline fave with a total of 5.5 goals, so let’s see what the best Coyotes vs. Lightning betting pick.

The Coyotes still search for their first win of the season

The Arizona Coyotes have been terrible since the opening night and a heavy 8-2 defeat at the Columbus Blue Jackets. They have only a point from the first six games thanks to a 2-1 shootout defeat at the Buffalo Sabres.

The Yotes started their road trip with a 5-3 loss at the Florida Panthers this past Monday. Playing as enormous +320 underdogs, the Coyotes had a one-goal deficit down the stretch, allowing the Panthers to score their fifth goal with 39 seconds left on the clock.

At least, Arizona scored some goals after finding the back of the net only once in their previous two outings. The Coyotes own the third-lowest scoring offense in the NHL, averaging 1.83 goals per game, while their defense is the worst with 4.83 goals allowed per contest.

Arizona will miss Ryan Dzingel on Thursday, as the 29-year-old winger suffered an upper-body injury last Monday. Nick Schmaltz is questionable to play, while it’s unknown who’ll guard the cage against the Lightning. Karel Vejmerka was benched against Florida, and Carter Hutton allowed one goal on 11 shots in relief.

The Lightning thrashed off the Pens to stop bleeding

The Tampa Bay Lightning (3-3-1) are off to a disappointing start of the 2021-22 season. Not only they suffer four defeats in seven outings, but the reigning champs also lost winger Nikita Kucherov due to a lower-body injury. Kucherov will miss the next eight weeks, at least, while defenseman Zach Bogosian will be sidelined for four weeks.

The Bolts are coming off a nice 5-1 home victory to the Pittsburgh Penguins this past Tuesday. They put an end to a three-game losing streak and bounced back from a shocking 5-1 defeat at the Buffalo Sabres.

Andrei Vasilevskiy posted 28 saves against the Pens to improve to 3-2-1 on the season. He owns a 2.78 GAA and a .904 save percentage, and Vasilevskiy is expected to patrol the crease Thursday against the Coyotes. The Lightning rank 29th in the league in goals against (3.71) and 16th in goals scored per game (3.00).

The Coyotes look like a real mess at the start of the new season, and it would be a massive upset if they find a way to get something from this clash. The Bolts haven’t impressed so far this season, especially not on the defensive end, but they have to outscore the Yotes, whose defense has been horrible thus far.

Five of Arizona’s six losses came by two or more goals, so I’m backing the hosts to cover a 1.5-goal spread at -122. Two of Tampa’s three wins came in overtime, so the Bolts should be fired up to replicate that strong performance from a 5-1 win to Pittsburgh.

Arizona’s offense showed signs of life in a tough matchup with the Florida Panthers. The Yotes have nothing to lose here, and I’m expecting them to score a couple of goals against the struggling Tampa Bay defense. It’s a tall task, but the visitors cannot count on their defense to make the difference.

Tampa Bay’s last three games saw six goals on the scoreboard, and the Lightning should find the back of the net at least four times against Arizona.