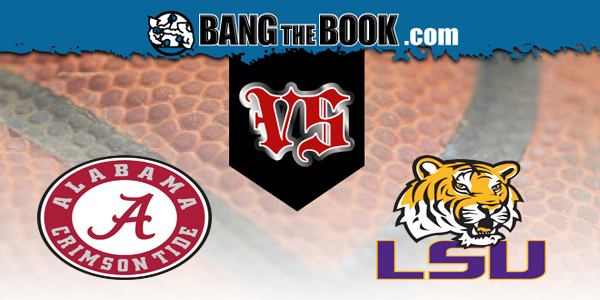 Sometimes it’s better to be lucky than good. That was the case last night, as Kansas somehow covered +9 against Baylor. A banked three at the buzzer was jubilation for KU backers and devastation for Bears bettors. Such is life betting college basketball. We all have those meaningless threes, ridiculous fouls, and other bad beat stories on both sides. They never seem to even out, but those on Kansas last night got one back.

With that we head into a busy Tuesday night card. Like I said yesterday, sometimes you have no choice but to look at a big game. That big game tonight is Alabama vs. LSU down in Baton Rouge. LSU is -1 at Bovada Sportsbook with a total of 163. It’s a big ol’ total, but these two teams went over that number last season and both are playing at quickened paces this year.

This is a really fascinating game in a lot of ways, aside from just being one that looks like it could have an NBA score. There are also some side angles in play as well.

The Tide have rolled to an 11-3 straight up mark and are 8-6 against the spread, depending on the number you got in some of their games that fell around the number. Since an unexpected loss to Western Kentucky, Alabama has ripped off seven straight wins and a 6-0 start in SEC play. They’ve only failed to cover once in that span and that was against Auburn on January 9.

Alabama does have some injury worries heading into this one, as Jordan Bruner, the tallest player on the roster at 6-foot-10, missed the game against Arkansas over the weekend with a knee injury. He is officially questionable tonight. Bruner had 20 in the win over Auburn, but only hit double digits once otherwise this season. However, LSU is a poor defensive rebounding team, so this would be a good spot to have the big man.

Alabama checks a lot of boxes both offensively and defensively. The Tide rank 24th in adjusted offensive efficiency, due in large part to offensive rebounding and taking care of the basketball. They actually haven’t shot that well, shooting 34.1% from deep and 50.3% inside the arc. They’ve been blocked a lot in the paint as well, but this is a team that likes to push the pace and shoot from three. Their adjusted tempo ranks 12th per Bart Torvik and their 3P Rate is 22nd in the country.

Defensively, this is a stout squad for Nate Oats. The Tide are 14th in adjusted defensive efficiency. Opponents are only shooting 30.6% from 3 and 45.8% from 2. Locking down defensively has been a big part of this SEC run. Only one team, Auburn, has scored over a point per possession on Alabama in the last eight games.

That would appear to be a major concern for Will Wade’s team. LSU is one of three teams in Bart Torvik’s top 49 that ranks outside the top 100 in adjusted defensive efficiency. Iowa and UCLA are the others. LSU wins with offense. They are fifth in the nation in adjusted offensive efficiency and 20th in eFG%. The Tigers are a great offensive rebounding team that gets to the line a lot and shoots high percentages from the field. They are at 36.7% on threes and 56.9% on twos. They’re also north of 77% at the free throw line.

Make no mistake, this is an excellent offensive bunch. And that’s how they’ve been able to win games. LSU has scored at least 1.072 points per possession in all 12 games this season. In their two losses, they were simply outscored, allowing 1.282 PPP to Saint Louis and 1.179 to Florida.

Recently, Wade’s team has done a bit better of a job defensively, holding Ole Miss to .872 PPP and Arkansas to .922 PPP in blowout wins. However, LSU is still 111th in adjusted defensive efficiency on the year. They give up too many offensive rebounds and opponents are shooting 52% inside the arc.

What has saved LSU’s defense is that opponents haven’t made enough threes. LSU’s 3P Rate against ranks 336th in the nation, as opponents are firing away 46% of the time from beyond the arc. Those opponents are only shooting 27.6% on those attempts. SIU Edwardsville opened the season going 13-of-27 from 3 against the Tigers and Saint Louis followed that up by shooting 10-of-24. Since then, LSU has allowed more than eight threes in a game just once.

SEC opponents are only shooting 27.4% from 3 against LSU. Opponents shot 35.8% last season. Maybe Wade committed to defending the perimeter, but it still feels like regression is coming in this one.

It makes sense to trust Alabama to get more stops. LSU will get their points, but Alabama is a better defensive team and a pretty strong offensive team as well, despite the average shooting numbers. They’ve shot 39.4% from three in SEC play thus far, so they’ve turned it around in that regard.

It’s Alabama for me. The +1 is fine. A plus money ML is better. They should win this game.