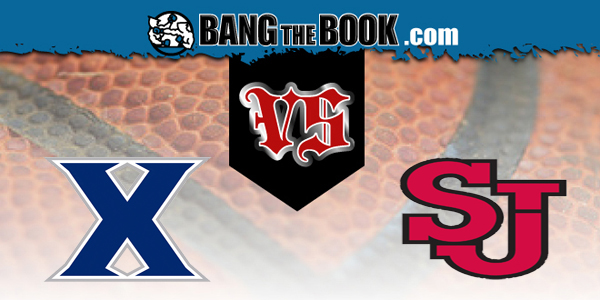 Things did not necessarily look too good for the St. John’s Red Storm earlier in the season, but to their credit, they are making a run at an NCAA at-large berth. They’ve still got some work to do, and they cannot afford to slip up against the Xavier Musketeers, who come into the Carnesecca Arena in Jamaica, NY with some tournament aspirations of their own.

The game begins at 8:30 p.m. Eastern time, and will be televised on Fox Sports 1. If you are signed up with BetAnySports, you will have an opportunity to watch this game and place wagers on it while it is in progress, using the facilities of Sports Betting Prime.

St John’s comes into this game sporting a 13 – 8 record, and averaging 79.4 points per game. They have, by and large, been playing their best basketball of the season.

The kids from Queens compiled a six-game winning streak recently, and they knocked off some pretty good teams, including the Villanova Wildcats, who came in with a #3 national ranking. That streak was halted last Tuesday with a 76 – 73 overtime loss to Butler.

Xavier is 11 – 3 for head coach Travis Steele. They have a victory over Oklahoma, which won’t hurt them with the selection committee when it comes time to determine at-large credentials. And they have some history going for themselves, as they have won TWELVE straight games over St Johns.

In the college basketball betting odds that have been posted on this game at BetAnySports, St Johns is the slight favorite at home:

If you can imagine it, Xavier committed 19 turnovers, shot just over 60% from the free-throw line and missed all twelve of their shots from three-point territory in the previous meeting between these schools, but still came out of it with a 69-61 victory. That is something St. John’s would rather forget, but they have to still remember it. The “big three” players on the roster – Julian Champagnie, Greg Williams and Posh Alexander – combined to hit just 26% from the floor. Obviously they’ll be determined to improve that.

But you’ve got to take note that this all came before the Red Storm caught fire.

One of the virtuous things about St John’s, we suppose, is the fact that they don’t have to depend on hitting three-point shots to survive. Champagnie is one of the most artful offensive players in the country, and will most certainly be an all-Big East selection as he leads the conference with 19.7 points per game. The real revelation is Alexander, a freshman who averages 11.6 points and also leads the Big East with 2.7 steals per game. He is obviously the key to coach Mike Anderson’s pressure. St John’s is among the top 25 teams in the country in defensive turnover percentage.

Xavier, which is led by Zach Freemantle’s 16.1 points per game, had to go through some Covid-19 issues. in fact, they have played only twice in the last 37 days. Their last game came a few days ago against Connecticut, which beat them 80 – 72. In that game,the Musketeers shot just 40.3%, and even though Freemantle had a big effort with 30 points, the rest of the team combined for only 12 field goals.

Xavier is 5th in the nation in assists, at 18.6 per game. Obviously with all of that ball movement, there is precision and timing required. And we have seen that teams coming off long layoffs during this pandemic have taken some time before getting into sync – longer than just a single game. With St John’s and its pressure, that might keep them off-balance. We are going to lean toward the Red Storm to end this 12-game losing streak to the Musketeers and bring themselves one step closer to making it to the Big Dance, likely a First Four berth.

BetAnySports puts you in the best position for March Madness, as you get reduced juice on your college basketball betting, along with the opportunity to place wagers during the game itself with Sports Betting Prime….. It’s easy to open up an account – just use your debit card, credit card, person-to-person transfers or the virtual currency of Bitcoin, which is fast and easy with their automated system, and never incurs a transaction fee!