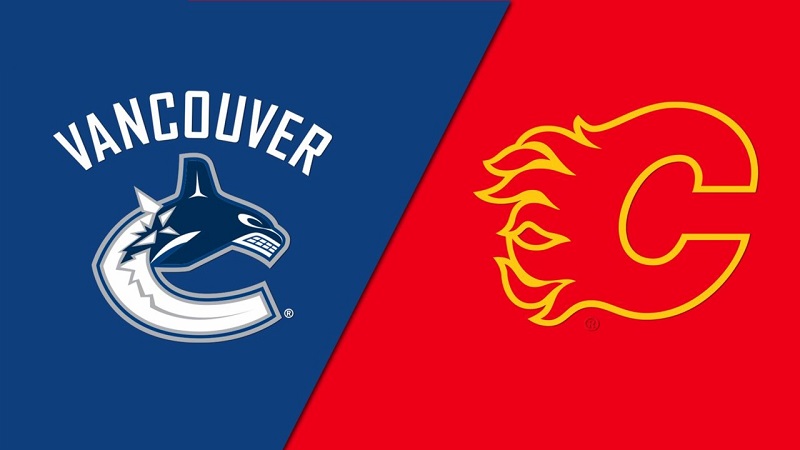 The 2021-22 NHL season goes on Saturday, January 29, with the loaded 11-game card, so we’re taking a closer look at the Pacific Division showdown from Scotiabank Saddledome in Calgary, Alberta, to get you the best Canucks vs. Flames betting pick and odds.

Vancouver and Calgary open their four-game regular-season series. According to Bookmaker Sportsbook, the Flames are firm -188 moneyline favorites. The Canucks are +169 road underdogs, while the totals sit at 5.5 goals.

The Canucks hammered Winnipeg to stop their three-game slide

The Vancouver Canucks (19-19-5) are coming off a 5-1 victory at the Winnipeg Jets this past Thursday. They put an end to a three-game losing streak, opening a four-game road trip with their third consecutive victory away from home.

Rookie Spencer Martin guarded the cage against the Jets and posted 33 saves to improve to 1-0-2 on the season. Thatcher Demko is expected to patrol the crease Saturday against the Flames, and the 26-year-old netminder is 17-14-1 with a 2.62 GAA and a .917 save percentage in 2021-22.

The Canucks surrender 2.72 goals per game (10th in the NHL). Their offense is a big problem, as Vancouver scores only 2.49 goals per contest (27th) on a 7.6 shooting percentage. Also, the Canucks own the worst penalty-killing percentage in the league (68.5%).

The Calgary Flames (20-13-6) are coming off a heavy 5-1 defeat at the St. Louis Blues this past Thursday. Playing on the second day of a back-to-back set, the Flames failed to extend their winning streak to three games, recording their sixth defeat in the last nine games overall.

Calgary’s defense fell apart at Enterprise Center. The Flames allowed five goals on just 28 shots, while Jakob Markstrom fell to 15-10-5 on the season. Markstrom is expected to guard the cage Saturday. He owns a 2.23 GAA and a .923 save percentage.

The Flames boast the third-best scoring defense, yielding 2.54 goals per game. They are tied with San Jose for the sixth-best penalty-killing percentage in the NHL (83.3%). On the other side of the ice, the Flames are tallying 3.21 goals per game (tied-10th in the league) on an 8.9 shooting percentage (tied-22nd).

Both Vancouver and Calgary have been unpredictable as of late. They meet for the first time in 2021-22, so predicting the outcome seems like a tough job even though the bookies are pretty sure who’ll come out on top.

The Flames’ defense is a key factor in this matchup. The hosts will outlast the Canucks should they manage to put on a strong defensive performance. Over their last two showings in front of the home fans, the Flames have allowed only a couple of goals while scoring 12 in a return.

The under has hit in four of the Flames’ last six outings at home. Calgary has allowed more than one goal only twice over its previous five contests, so I’m expecting a low-scoring affair Saturday at Scotiabank Saddledome.

On the other side, the Canucks have scored more than a couple of goals just three times over their last nine showings at any location. The total has gone under in five of their previous seven games.