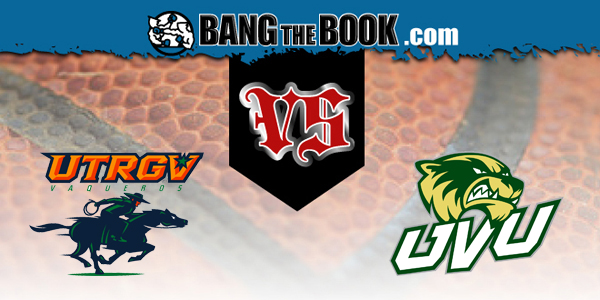 Belmont’s unbeaten record in OVC play went down in flames last night, but the game did not go over the total and that was our main focus. Alas, we are down to 2-2 for the week, but a quick note to fade Belmont on Saturday now that their game doesn’t matter in advance of the OVC Tournament.

Anyway, we’ll get back at it tonight with a good betting board for February 26. Our travels this evening take us to Orem, Utah, where the Utah Valley Wolverines take on the Texas Rio Grande Valley Vaqueros. Utah Valley is -3 at Bookmaker with a total of 143.5. This one was -2.5 across a few books at time of writing, but with the line showing signs of going to -3, it only seemed fair to list it at that.

This will be UT Rio Grande Valley’s first game against a Division I opponent since February 6. It has been a tough month for the Vaqueros and it has nothing to do with wins and losses. Well, a loss, just not one in a game. Head coach Lew Hill died in his sleep just hours after coaching the Vaqueros in their game against Texas Southern. It was said that Hill was going to excuse himself for health reasons after coaching that game.

Hill had battled COVID, but had also recently been diagnosed with a bone marrow disorder called amyloid light-chain amyloidosis, an affliction that affects about 4,500 new individuals each year. The news was obviously shocking to the Vaqueros players, who knew that Hill was stepping aside, but had no idea it would end like this.

Jai Steadman is the interim head coach for UTRGV now after serving as an assistant coach for 8.5 years. The Vaqueros responded nicely in their win over Dallas Christian by a 116-51 score on February 21, but that was just their second game in over a month after a COVID pause.

The Vaqueros are a really stout defensive team, at least on the perimeter. Opponents are only shooting 26.7% from three-point range. They are 48th in eFG%, though they’ve played one of the five worst schedules in college basketball this season. Their TO% against that bad slate of teams is 25.7%, good for fourth in the nation.

The problem for the Vaqueros is that they can’t score. They rank 338th in eFG% offense. They are 340th in 3P% at 28.4% and 323rd in 2P% percentage at 44.4%. Though they hung a big number against Dallas Christian in that emotional game, I wouldn’t read too much into it.

I’ll beat this drum pretty hard, but I think Utah Valley is the sleeper team in the WAC Tournament to go up against Grand Canyon. The Wolverines get to the rim a lot and take a lot of high-percentage shots. Mark Madsen’s team split with New Mexico State last weekend, winning the first game and then coming up short in the second game because the Aggies made adjustments.

In the first game, Utah Valley was 14-of-16 at the rim and had seven dunks. They were 9-of-19 on mid-range jumpers. In the second game, Utah Valley only had two dunks, just 12 attempts at the rim, and was forced into 28 mid-range attempts. They only made 10. It was a good, strong adjustment from Chris Jans and the Aggies that really hurt Utah Valley’s ability to score.

For the most part, the Wolverines haven’t had that problem. According to Haslametrics, Utah Valley has the fourth-best Proximity, which is a stat that details how close or how far shoots usually come from a team. Only Stephen F. Austin, Buffalo, and Stanford get inside and shoot close to the rim at a higher rate.

The Wolverines aren’t a bad defensive team. They don’t force many turnovers, but opponents are only shooting 47.3% on two-point shots. That will be a problem for UTRGV, who is awful from three and only takes a three-pointer about 36% of the time.

I like Utah Valley in this game and also like the Wolverines tomorrow in the elevation of Orem. UTRGV hasn’t played consecutive games since beating Dixie State twice at home in mid-January. This is actually just the second road game since December 10 because of the schedule and COVID pauses. Orem is over 4,700 feet in elevation.

Utah Valley gets to the rim a lot and a shorter Vaqueros team is unlikely to provide much resistance. We could see some Vaquero money buy back the line because we’ve seen some big moves when there are TO% discrepancies, but I’m content with this one at -2.5, -3, or even a little bit higher.