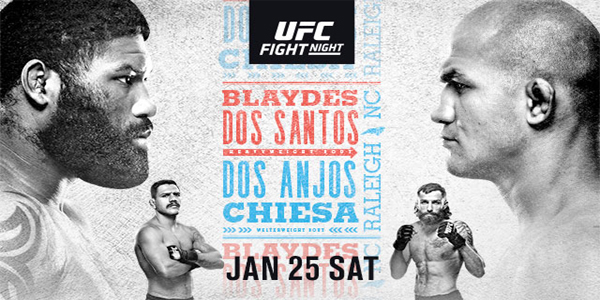 The UFC heads to Raleigh for the first time for UFC Fight Night 166. Also known as UFC on ESPN+ 24, this event has a tough act to follow after UFC 246, but we have a really good set of fights for an ESPN+ event and just enough to keep fight fans satiated while they wait on UFC 247 with the return of Jon Bones Jones on February 8.

In all, we have 11 fights on the card and the odds from 5Dimes Sportsbook will help us navigate through the card. There are a lot of well-known fighters, but also some newcomers and prospects, so this card has something for everyone, including three women’s fights, one from each division.

Action begins in the featherweight divison with UFC debutant Herbert Burns at +105 against UFC debutant Nate Landwehr at -125. Landwehr was a rare American-born fighter participating in M-1, where he was the champion and also had two title defenses. The 31-year-old Landwehr is fighting one of the many Dana White Contender Series finds speckled throughout the UFC divisions in Burns. Burns has a nice 9-2 record of his own, but this looks to be a step up in class, as M-1 is considered one of the top international promotions. The price looks a touch cheap on Landwehr here.

Bantamweights Brett Johns and Tony Gravely are next up on the card, with Gravely the -120 favorite at 135 pounds. Gravely is giving up a little size and a little reach here, but he is the more active of the two fighters and the deserving favorite. Gravely is yet another DWCS find and his performances in CES coupled with his win over Ray Rodriguez back in August was enough to get him a contract. Johns is coming off of a long layoff here, with his most recent fight at UFC 227 against Pedro Munhoz. Johns was a UFC fixture for a while, but took a lot of time off following consecutive losses. Cage rust could be a real thing, but Johns is more experienced at this level and the even money price looks good on the small dog.

Lina Lansberg is +135 to Sara McMann’s -155 odds in the first of three women’s fights on the card. The 39-year-old McMann is nearing the end of the line, with consecutive losses to Marion Reneau and Ketlen Vieira. In fact, this is McMann’s first fight in nearly two years. It sure says a lot about Lansberg that McMann is coming off of two losses and a long layoff and the line is still -155. This seems like a mispricing, though, as Lansberg had wins over Tonya Evinger and Macy Chiasson during an impressive 2019. She has to be the pick here at a plus price.

Montel Jackson is the biggest favorite on the card with a line of -630 against Felipe Colares. Colares is 1-1 in his UFC career with a split decision win over Domingo Pilarte and a loss over 15 minutes to Geraldo de Freitas. Jackson is a big prospect in this division as a strong, lanky, athletic fighter. He should overwhelm Colares here and the odds suggest the same.

Justine Kish looks to snap a two-fight skid at +155 against Lucie Pudilova. The -175 price on Pudilova makes her the biggest favorite in a female fight on this card. The 25-year-old is coming off of three straight losses, including the first stoppage loss of her career against Antonina Shevchenko. It hasn’t been a good look lately for either fighter. Once round props come out, the over 2.5 will be heavily juiced here, but it will be a good open parlay piece for this card and I’d wait on that since neither fighter is particularly consistent of late.

Nik Lentz and Arnold Allen were originally set to face other fighters. Now they will face each other in the featherweight division. Lentz is +240 to Allen’s -300 in this scrap. Allen is an up-and-coming prospect and he draws an interesting assignment here against a very experienced fighter in Lentz. There are some thought reminiscent of the most recent fight that we saw between Roxanne Modafferi and Maycee Barber, in the sense that the younger, more exciting fighter is facing a very experienced combatant. Allen has shown a lack of finishing ability at this level and that does seem a little bit concerning. I’m not rushing to back Lentz, but I wouldn’t lay the -300 on Allen here either, even if he is going to be the aggressor.

Dequan Townsend is +360 to Bevon Lewis in middleweight action to finish out the preliminary card. Lewis’s -450 price tag makes him the second-largest favorite on the card behind Jackson. Lewis was originally slated to fight Alen Amedovski, but Townsend now slots in. This is a step up in class for Townsend, who spent a good portion of his fight with Dalcha Lungiambula on the mat. Eventually Townsend was knocked out in his UFC debut. He doesn’t stand much of a chance here either, even though Lewis hasn’t been impressive in his most recent fights.

To the main card we go, where Dana White Contender Series find Jamahal Hill makes his official UFC debut against Darko Stosic. This line does look a little bit light here, given that Stosic is just 1-2 in his three UFC fights and took some punishment in his most recent fights against Devin Clark and Kennedy Nzechukwu. It is possible that Stosic would have had a different fate had he not lost points for illegal kicks against Clark.

Hill is pretty green with a 6-0 record, most of that coming in KOP. He is stepping up in class here against a legitimate UFC caliber fighter, which has likely depressed this price a little bit. Stosic can control the Octagon and make Hill come to him. At that point, we’ll find out all about Hill’s defense. He hasn’t had to show a lot of it in his fights to this point. Ultimately, this looks like one of the tougher handicaps on the card. Do we bet on the promise and the record of the newcomer or do we take the safer, more predictable fighter?

Hannah Cifers is on a nice, little run. She’s got back-to-back wins over Jodie Esquibel and Polyana Viana. In fact, her only UFC loss is against Maycee Barber, who is a pretty darn good prospect in this division. Cifers will try to keep that going here against Angela Hill, who also has a win over Esquibel recently. Hill scored her fourth career knockout last time out over Ariane Carnelossi, as doctors decided she could no longer continue.

It seems unlikely that Hill will score the stoppage win here, as Cifers has only been knocked out once and it was at the hands of Barber. Hill is likely the better all around fighter, even if her record doesn’t show it. She’s been in UFC longer and has fought a much stronger list of opponents than Cifers. That reputation precedes her into this fight, hence the -160 line. She does look like the preferred fighter here, but that price is a little bit too steep.

Two-time Dana White Contender Series fighter Jordan Espinosa is looking to bounce back from his first loss in quite some time. He’ll have to do so as a sizable underdog against Alex Perez. Espinosa tapped out to Matt Schnell’s submission and that stunted a lot of momentum that had been building for the 30-year-old. He does have some reach on Perez in this fight, but we do have to worry about that takedown defense in this one.

Perez has 27 fights under his belt at the young age of 27. This will be his 28th and he will turn 28 in March. Perez had a nice bounceback effort against Mark De La Rosa to get back on track after the loss to Joe Benavidez at the TUF 28 Finale. He should get another win to keep that train rolling here in this one. It is a big surprising that more of Perez’s fights have ended in stoppages of late, as he only has 10 stoppage wins out of his 22. Espinosa hasn’t gone too deep in a lot of his fights, as 12 of 20 have ended via stoppage. Perez’s gas tank should carry him to the win here.

This is a pretty solid lead-in to the main event as Rafael dos Anjos looks for a bounceback effort following the loss to Leon Edwards back in July. Michael Chiesa is looking to get a signature win and get back up towards where he was earlier in his career. There is a lot on the line for both fighters here.

Chiesa lost to Kevin Lee and Anthony Pettis by submission before bouncing back for wins over Carlos Condit and Diego Sanchez. Chiesa recently moved to welterweight and has had some issues with the weight cut, so you’ll want to see how he looks for this one before jumping on board. He had fought at lightweight forever.

Dos Anjos seemed to have more success at lightweight than he has at welterweight since making the change in the middle of 2017. He is 4-3 in his seven fights. In his defense, he has lost to the likes of Colby Covington, Kamaru Usman, and Leon Edwards. Chiesa is not in that category.

The main event of the evening comes from the heavyweight division, where Junior dos Santos and Curtis Blaydes lock horns. Blaydes has two losses to his name and both of them have come against Francis Ngannou. Other than that, he is a perfect 12-0 against everybody else and has multiple paths to victory. He has nine knockouts and also three stoppage wins.

As far as the losses for Dos Santos, most of them have come against elite competition as well. He lost to Ngannou himself last time out. He also has losses to Stipe Miocic, Cain Velasquez twice, and then a loss early in his career against Joaquim Ferreira that remains the only submission loss of his career. Dos Santos looked really good in his fight against Derrick Lewis in early 2019 and I don’t think this line is fair for him. He has a better chance than what this line implies. Blaydes hasn’t fought the types of guys that Dos Santos has.

I generally gravitate towards the underdog in these heavyweight fights where one strike can end it. That is the case here, too.