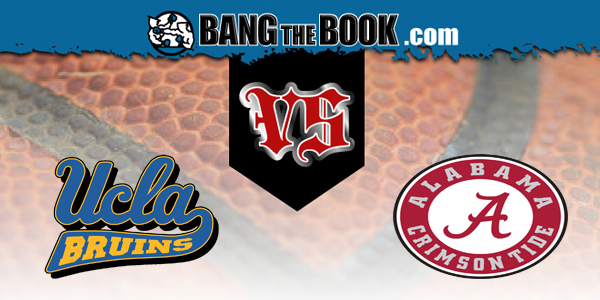 There was a time when we weren’t sure how many Pac-12 teams were good enough to actually be in the NCAA Tournament. Oregon State’s Pac-12 Tournament run put them in the field and UCLA was in the play-in game. Oregon and USC were the conference’s top dogs and even Colorado beat a hot Georgetown team before bowing out in the second round.

One of those Pac-12 teams will look to defy the odds and upset the Alabama Crimson Tide to advance to the Elite Eight. That team is the UCLA Bruins, who won three games in six days last week to set up this Sweet 16 matchup as an 11 seed. The Bruins have a tall order against the Tide, who are -6.5 across the market, including at MyBookie Sportsbook. The total sits at 145.5.

Maybe we’ve all disrespected the Bruins and the Pac-12 too much. After all, 25% of the Sweet 16 came from that conference. UCLA is certainly a surprise team to be making a run like this. The Bruins lost their final three games to end the regular season and then became a first-round exit in the Pac-12 Tournament against Oregon State. The fact that the Beavers won the Pac-12 Tournament to make that loss a little more appealing could very well be the only reason UCLA made the field of 68.

The Bruins beat Michigan State in overtime, walloped BYU, and then took advantage of a tired Abilene Christian team that had just beaten an in-state Big Brother in Texas. So, UCLA is here in the Sweet 16 and seemingly being disrespected again, as bettors are lined up to back Alabama, despite a lower line on this game at some of the metrics sites.

The Bruins have a good offense, due in large part to their ability to take care of the ball and make threes. UCLA plays at a glacial pace, though, and doesn’t take a lot of three-pointers, so those two things do seem like they could be maximized a bit more. Maybe that’s why UCLA never really had that impressive of a resume during the season. To that end, UCLA was 2-6 in Quadrant 1 games and 1-5 in Quadrant 1-A games per Torvik. Alabama qualifies as a Quad1A game.

The Bruins went 11-3 in games decided by six or fewer points, so at least Mick Cronin’s team is battle-tested. This is a lackluster defensive bunch, though, so that record is a bit surprising. UCLA is outside the top 150 in both 2P% and 3P% defense. They’ve been fortunate to play a pretty weak slate of teams to this point in the NCAA Tournament.

I guess we could probably stop the preview right there, since it seems pretty clear which team I am lining up with in this Sweet 16 matchup, but we might as well talk about Alabama. The job that Nate Oats has done down in Tuscaloosa has been very impressive. While everybody salivates over the offensive numbers for the Tide, the defense is actually the more efficient of the two units.

Alabama plays at a heightened pace, which will be interesting to watch against a UCLA team that wants to move like maple syrup coming out of a tap. The Crimson Tide are 10th in adjusted tempo per Torvik and UCLA is 328th. Ken Pomeroy has 11th and 337th, so the gap is even larger there. This total in the mid-140s is quite big for a UCLA game.

Alabama usually wins the pace war by turning opponents over. The Tide rank in the top 65 in TO% on defense. Offensively, they aren’t really as efficient as they could be, ranking 86th in 3P% and 130th in 2P%. Alabama ranks 200th in Assist Rate, so there is a little bit too much individualism with the basketball, but a lot of guys here can create their own shots. It’s just a matter of whether or not those go in.

Given that Alabama has about 3.25x more “Close Twos” than “Far Twos” by attempt according to Torvik, their opponents numbers should look a lot better. They’ve had a lot of good looks that just haven’t gone in.

Yeah, I’m on Alabama here. Their pace will give UCLA problems and make the Bruins uncomfortable. Oats should put a pressure defense on and speed UCLA up in this game. Force the Bruins into playing at their tempo. Alabama gets to the rim a lot. UCLA is not great at defending the tin. This UCLA team doesn’t have a whole lot of size overall.

Alabama is also one of the best teams that UCLA will face this season and the Bruins have struggled against high-quality competition. They’ve been lucky not to face any of it to this point, otherwise their season would be over already.