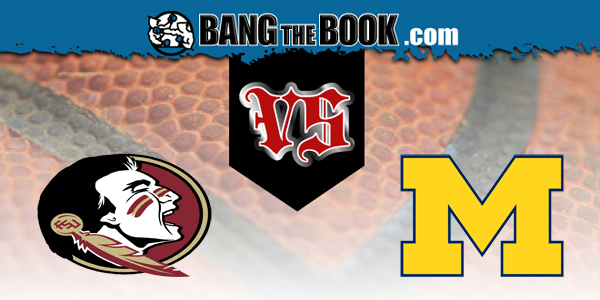 Only one Big Ten team remains. Nine of the 68 teams to gain entry to the NCAA Tournament came from the conference we all agreed was the best in the nation. Well, with two #1 seeds, one is gone and the other is a small favorite against Florida State in the Sweet 16. That team is the Michigan Wolverines, who are laying points, but it sure seems like everybody considers them an underdog.

Michigan is -2 with a total of 143.5 at Bovada Sportsbook as we look ahead to Sunday’s 5 p.m. ET start time in the Sweet 16. Florida State is certainly a dangerous matchup for the Wolverines. Of course, it seems like just about every matchup has been dangerous for the Big Ten. Michigan backers, bettors, and boosters are hoping that what the Big Ten has isn’t contagious.

Lost in the shuffle of how the Big Ten has played this postseason is that the ACC was a bad conference pretty much all year. While Florida State and Syracuse still remain in the NCAA Tournament, perennial powers like Duke and North Carolina didn’t even qualify for the Big Dance. Georgia Tech and Virginia went out in the first round. So did Clemson. It’s not like the ACC should be held in high esteem.

However, Florida State seems to be a different kind of animal. The Seminoles are the tallest team in the country, which could pose a lot of problems for Michigan’s star freshman Hunter Dickinson and sophomore Franz Wagner. Michigan can shoot the three and does so effectively, but the Wolverines don’t take a lot of them relative to their peers.

The Seminoles have had their ugly games and poor efforts, but from a ceiling standpoint, few teams have a higher top level than Florida State. This is one of a small number of teams to rank in the top 25 in both adjusted offensive and defensive efficiency per Bart Torvik. Ken Pomeroy is lower on Florida State’s defense, which is mostly a byproduct of how disappointing the ACC was this season. He still has Florida State as his 13th-best team. Torvik has FSU eighth.

Any way you slice it, this is a legit FSU team, even though the Seminoles were only 3-4 in Quadrant 1 games. Perhaps some of that falls on Leonard Hamilton, who is a good recruiter, but has had some issues in big games. Perhaps some of it falls on Florida State’s high TO% on offense at 20.3%. When FSU takes care of the ball, this is a team that can beat just about anybody. When the Seminoles don’t, the problems can start.

This is a borderline top-20 offensive rebounding team and a team that shoots very well in all facets of the game. It is also a defense that ranks in the top 10 in 2P%, a big deal against a Michigan team that takes 65% of its shots inside the arc.

The part about Florida State taking care of the basketball is the most important element of this game. The Big Ten Conference ranked 30th in TO% on defense and losing the turnover battle has been the kiss of death for a lot of the teams in this conference in the NCAA Tournament. Michigan only forced three turnovers against LSU in the second round, but survived and advanced. If the Wolverines can’t force turnovers here, they won’t get as lucky.

Michigan’s TO% of 14.6% on defense ranks 338th in the nation per Bart Torvik. They don’t create extra possessions for themselves. They are also at an offensive rebounding disadvantage here, so they may squander multiple chances to get extra possessions. On the other hand, the TO% problem hasn’t been that big of an issue, as the Wolverines were 8-3 in Quadrant 1 games.

This is a team in the top 25 in both key efficiency metrics. The Wolverines are a borderline top-10 offense from three, though they don’t take a lot of them. They are a top-40 offense in 2P% and a top-20 offense at the free throw line, which could be very important in a game lined as close as this one is.

Something to consider from Michigan’s first two games is that Texas Southern had 64 field goal attempts to 54 for Michigan. LSU had 69 to just 52 for Michigan. Opponents are consistently taking a lot more shots because of UM’s inability to force turnovers.

The tone of the preview probably gave it away, but Florida State is the pick for me here. This is the spot I’ve had circled for Michigan ever since the draw was announced. I waited to mention that Michigan is still without Isaiah Livers. The Wolverines can get past a #16 seed in Texas Southern and a LSU team that doesn’t play defense without Livers. This feels like the type of game when his services are needed.

Livers was a 43% three-point shooter for a team that may not have much success getting the ball inside with uncontested attempts against the Seminoles. I won’t back down now. I liked Florida State from the draw and I like them here, too.

There are 2.5s out there, so look for those. Also, sprinkle the money line a little bit here with something like a 70/30 split or so.