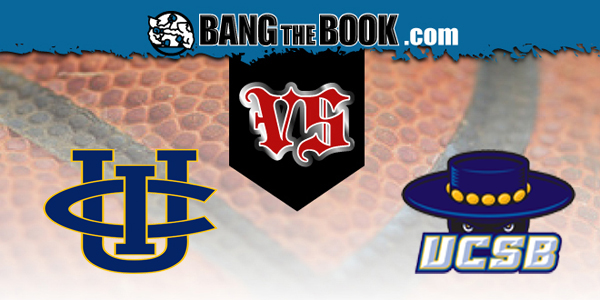 It will be #1 vs. #2 in the Big West Conference Tournament finale when UCSB and UC Irvine square off for the right to go to the NCAA Tournament. In fact, the only upset by seed came on Day 1 when Cal Poly knocked off Cal State Fullerton after going just 1-15 in the regular season in conference play.

The top-seeded Gauchos are -3 in this one with a total of 126.5 against the Anteaters at Bovada Sportsbook. This tournament is no longer played at the Honda Center in Anaheim, which was a stone cold under venue. It is now at Michelob Ultra Arena at Mandalay Bay. We have certainly seen some higher-scoring games, but also some low-scoring affairs. We’ll see how this one plays out between UCSB and UC Irvine.

The Anteaters and Gauchos were pretty clearly the best teams in this conference, so it makes sense that they would meet in this spot. Irvine actually swept the two regular season meetings by scores of 75-56 and 73-69, both at home. Those were two of the three conference play losses for UCSB. The other came later in the year against UC Riverside, the team that Irvine beat to get here.

Irvine is an offensively challenged team, but spectacular on the defensive end. The Anteaters ranked ninth in league play in eFG% offense and 2P%, while also ranking 10th in 3P%. They did, however, boast one of the top free throw shooting percentages and were second in offensive rebounding.

The 1.060 and 1.127 points per possession in the wins over UCSB were two of the team’s better performances on the offensive side in Big West action, even though Irvine only shot seven three pointers in the first matchup. Those two games took place on December 27 and 28, so it may be unfair to put a lot of weight or a lot of stock in them.

The Anteaters wound up second in 3P% defense and first in 2P% defense in Big West action at 33.4% and 40.2%, respectively. Their 2P% defense ranks fourth nationally overall at 42.6%. Their overall eFG% on defense ranks ninth in the country at 45.1%.

UCSB is the much better offensive team between the two. The Gauchos rank 52nd nationally in 2P% at 53.3% and 60th in eFG% at 52.8%. Joe Pasternack’s team struggled to shoot threes in league action at 33.7%, but also didn’t take a whole lot of them. Another big area where the Gauchos excelled is taking care of the basketball. Their TO% on offense ranked second in the conference at 17.1%. They also took advantage of other teams’ mistakes with the second-highest TO% on defense.

That could be a factor here. UC Irvine was fifth in TO% on offense in Big West action and fourth in TO% on defense. In a game that will be played to a slow tempo, every possession will be critically important. The game will probably be played to an even slower tempo with so much on the line. The first two games were played to 71 and 65 possessions. UCSB has played some extremely slow games this season, including some played to 58 and 56 possessions.

This game for UCSB could very well hinge on JaQuori McLaughlin. The 6-foot-4 senior does pretty much everything for this Gauchos team and is an 84% free throw shooter to go along with a very high assist rate. In the first meeting between the two teams, McLaughlin had just nine points on 4-of-10 shooting. In the second game, he had 22 points, but was 12-of-12 from the free throw line. He was 5-of-12 from the field.

Irvine tried to force the ball out of his hands as much as possible to make other players beat them. This is not an overly deep Gauchos team, so somebody needs to step up to help McLaughlin out in today’s matchup.

I’ve talked about it already, but things tend to tighten up quite a bit in championship games with so much on the line. As it is, UCSB plays at a really slow tempo. UC Irvine is plenty fine with that, as they’ve never been one to run the floor. They win with defense anyway, so the fewer possessions, the more confident they would likely feel.

We’ve already seen some under movement here, as we do in basically all conference championship games. I would expect we get more of it as the day goes along and especially as bettors find this late game.

I agree with that sentiment and that approach and also think under 126.5 is a good look in this one.