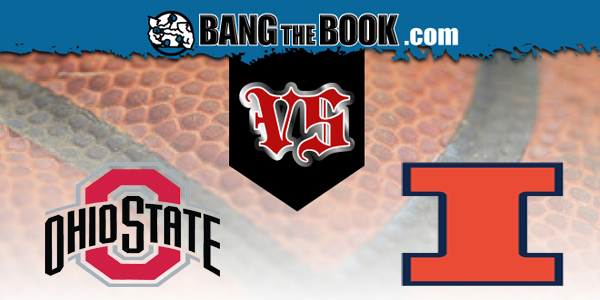 Limited lead time for today’s spotlight college basketball article, but I needed to catch up on some sleep on the heels of a Vegas trip and the time change took an away from the day. With Selection Sunday coming up here this afternoon, we don’t really have a ton of time to break down games, but Ohio State vs. Illinois is the latest of the games with a 3:30 p.m. ET start time, so we’ll dig through that one.

Bookmaker Sportsbook has the game lined Illinois -6 with a total of 148. The Buckeyes have made a big run to get to the Finals with a close win over Minnesota, an overtime win over Purdue and a nailbiter against Michigan. The Fighting Illini have had a much less taxing path.

Let’s read on and see how this one will play out.

Ohio State lost four straight to end the regular season, but winning four straight now would mean a Big Ten Conference Tournament title. This is a Buckeyes team that has beaten every team it has played this season, but also has eight losses in conference play.

There aren’t many coaches in the country that have their teams prepared better than Chris Holtmann. It has been a different hero every game in the Big Ten Tournament, but Holtmann’s Buckeyes are almost always ready to go and have a good gameplan against the opposition. This isn’t the most talented team in the Big Ten, but it could be one of the most balanced because so many players can be relied upon.

If there is a knock on Holtmann, it is that. He doesn’t have a stud. A go-to guy like Kofi Cockburn or Ayo Dosunmu. He just has a lot of above average players to the point where others can step up when others go cold. That has happened this week, as guys like Duane Washington, Kyle Young, and EJ Liddell have all stepped up with big contributions and big minutes.

Nobody will deny that the Buckeyes are a top-notch offensive team with that balance. Even in an excellent Big Ten Conference, Ohio State was second in adjusted offensive efficiency, third in 3P%, second in 2P%, and led the conference in free throw percentage, which has come in handy this week. Ohio State’s problems are on defense, where they don’t guard the perimeter overly well and are not adept at forcing turnovers. They have to score to win because they don’t stop the opposition much.

This line is a little bit inflated for two reasons. The first is that Ohio State is playing a fourth game in four days after three close games. How much can be left in the tank at this point? It is also a bit pricey because of the way that Illinois has been playing. The Illini were thought to have one of the highest ceilings in this conference. Since losing to Ohio State on January 16 to fall to 5-3 in league play, Illinois has lost one time and that includes two dubs here in the conference tournament.

All but one of the losses for Illinois have come in Quadrant 1 games, so they’ve lost to the likes of Baylor, Missouri, Rutgers, and Michigan State on the road, while also losing at home to Maryland and Ohio State. The Maryland loss is really the only black mark on the season to this point.

Illinois isn’t quite as balanced offensively as Ohio State with big contributions required from Dosunmu and Cockburn. Da’Monte Williams and Trent Frazier have been effective players, but despite playing a lot of minutes, they do have lower usage rates. Illinois doesn’t run quite as deep as other Big Ten teams. Fortunately, because they’ve won both games in blowout fashion thus far, Cockburn has played limited minutes. Dosunmu has been in there a lot, but he’s able to do that more than the big man.

Illinois isn’t a big three-point shooting team. They work the ball inside a lot. They’ve only taken 32 three pointers in these two games. Ohio State took 31 alone in the win over Purdue. That will be an interesting dynamic in this game.

Ohio State’s run has been outstanding, but the curse of falling on the 5 line is that you have to play that extra game. Ohio State has let some leads slip away this week and has played some too-close-for-comfort games that have required a lot of effort. The win over Michigan was a grueling kind of game and the Buckeyes overcame a free throw disparity and an awful day on two-point shots to win.

Illinois is the play here. This price is inflated, but they’ve played two easier games than anything Ohio State has had yet. The Buckeyes are down Kyle Young, so they don’t really have an answer for Cockburn inside. Maybe they’ll play hack-a-Cockburn and put the 55% shooter on the line a lot.

Either way, I don’t think Ohio State has enough in the tank here coming off of a win against their archrivals to get revenge for the February 21 game.