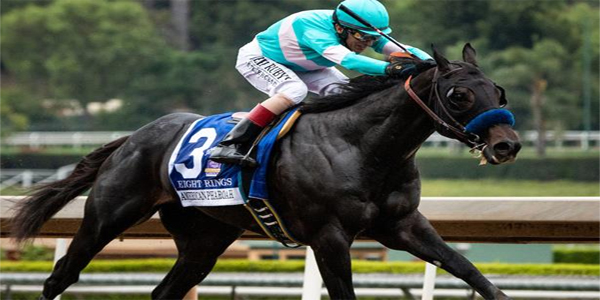 In a perfect world, we’d be a week away from the Kentucky Derby. It is not a perfect world, but we do still have the Arkansas Derby coming up on May 2. Before we get to that huge Grade 1 race at Oaklawn Park, we’ve got a couple of extremely interesting stakes races this weekend with the Bachelor Stakes and the Carousel Stakes.

It will be a big-time Saturday in Hot Springs with these two races. We’ll take a look at both of them here at BangTheBook, beginning with this look at the Bachelor Stakes.

This is a $100,000 purse featuring nine three-year-olds running just six furlongs. It wouldn’t be a huge surprise to see one of these horses make an appearance in the Preakness Stakes, but the Kentucky Derby seems like a stretch with the additional length. Eight Rings and Sir Rick are the only horses that have gone 1 1/16 miles.

But, our focus is on this race and the six furlongs coming up in Race 9 on Saturday April 25.

Here are the post positions for the field and the trainer and jockey combos with the morning line odds from the racing form:

Eight Rings is the favorite for the Bob Baffert and Joel Rosario tandem and 5/2 is a price that will likely go down, given that this colt won the American Pharoah G1 race last year at Santa Anita and was a promising contender for the Breeders’ Cup Juvenile before finishing sixth.

Joe Talamo and Tom Amoss have the second favorite from the far outside post in Long Weekend, who has three wins in four events, including a win in the Gazebo Stakes at Oaklawn just over a month ago.

That win for Long Weekend came over Little Menace, who was a game second-place finisher and has not finished outside the top two spots in four career races. Three-year-olds sired by Into Mischief have been popular bets to this point, so we’ll see if that continues in this race.

Let’s size up the nine competitors and put together a bet slip:

Little Menace will be a popular pick on Saturday. The longest odds this horse has faced him been a little less than 3/1 in a win in allowance optional claiming back on February 2 at Oaklawn. He won that race by a head over American Butterfly by talking the pace. Little Menace has been both a pacesetter and a stalker and that versatile running style is likely to be popular with the bettors.

To this point, Little Menace has run three straight races with an Equibase Speed Figure of 98 and has been one of the most consistent three-year-olds in this field.

Beau Oxy is a long shot from the Hugh H. Robertson barn. His son, McLean, will have his seventh different rider in as many races here. Beau Oxy finished fourth, 11 lengths behind Long Weekend, in the Gazebo Stakes. It was a decent run, but it was clear that he didn’t have the speed. The line of 20/1 here suggests the exact same thing about this field, which is even stronger thanks to Eight Rings.

One interesting side note about Beau Oxy is that the son of Oxbow seems to like the dirt a lot. In his six races, three have been on dirt and he’s won two of them. He was fourth in the other with that stronger field. This is a good test for a horse that could be a little too overlooked.

Echo Town makes his fourth start of 2020 for Steve Asmussen. He won an allowance race back on March 13 on a sloppy track by 3 3/4 lengths over American Butterfly, who seems to have something of a penchant for finishing second. This is a horse with two enormous speed figures in the last two races.

The son of Speightstown will have Ricardo Santana Jr. in the mount once again. He is more of a closer than a pacesetter and you can bet that he’ll be driving hard in hopes of finishing this one on a high note. Last time out, he just outran American Butterfly after a three-wide final turn. In his third-place finish, he finished one length behind Tuggle for second, but 4 1/2 lengths behind the winner Lykan.

Ginobili will have David Cohen in the mount for a second straight race in search of better fortunes. This is a good horse that had an excellent run, finishing a close second to Nadal in the San Vicente G2 race at Santa Anita back in February. Ginobili had impressive speed figures prior to not doing much for Cohen back on April 5.

This is a quick turnaround, but that run with Nadal, who just won the Rebel Stakes, shows the ceiling for this horse. It is a big ask for the son of Munnings and of trainer Richard Baltas, but Ginobili may be ready for a bounce back run.

Lykan is the most experienced horse of the bunch with a ton of past performances to examine. Those performances have been all over the place as well. Tyler Baze draws the mount again after leading Lykan to a show and a win at Oaklawn Park in the last two races, including a third in the Gazebo Stakes.

This horse has been all over the map, but has hit the board in five of six dirt starts, including the AlwOC win back in February. The third was a distant third of 8 1/4 lengths behind the winner Long Weekend in the Gazebo. This is a solid horse and a horse that has had some big runs, but isn’t consistent enough to take in a field of this caliber.

Liam’s Pride has had some terrific workouts in the lead-up to this race. This is a step up in class, though. This is the stakes debut for Doug O’Neill’s three-year-old and he is far from being the favorite like he was in his only career win two races ago. Six furlongs seems to be the right distance here, but with a really good field and a tough post position, he seems like a real long shot to get to the board. The 20/1 price is confirmation of that.

Eight Rings looks to be the class of the field. Who knows what sort of price we may be talking about if he hadn’t lost rider Drayden Van Dyke in the Del Mar Futurity G1 last year in September. He was the 1/2 favorite in that race. He then went to Santa Anita just 25 days later and won the American Pharoah Stakes. He went off as the second favorite in the Breeders’ Cup Juvenile G1 race at Santa Anita on November 1, but finished 12 1/4 lengths behind the winner, Storm the Court, who will be at Oaklawn for the Arkansas Derby next weekend.

Eight Rings was ridden by John Velazquez in the last two races, but now draws Rosario, which is a strong power move. We have some clear and pressing questions given the long layoff, but we’ve seen some excellent workouts from him of late. The late fade in the BC Juvenile at 1 1/16 miles was concerning, but with six furlongs and the speed of this horse, he should set the pace and easily has the endurance to sustain it.

Sir Rick is definitely stepping up in class here. The speed figures have been underwhelming, but the Richard L. Davis colt still has four wins and a show in seven dirt starts. That says more about the level of competition than it does about the horse. The numbers just aren’t there and the post position with pressure from Long Weekend on the outside is bad, too.

One note about Sir Rick – after finishing 13th in the Oaklawn Stakes back on April 11, he’ll have blinkers in this race. He was second midway through that race on a sloppy track, but stopped running. We should have a firm and fast track on Saturday.

Long Weekend has three wins in four tries, all of which have come in the favorite role. Long Weekend will be hard-pressed to be the favorite over Eight Rings on Saturday, but expect another short price here. The wins for Long Weekend have been impressive, statement types of victories by 4 3/4, 6 3/4, and 5 lengths, with the first two at this same six-furlong distance. The workouts have been good, not great, but this is a horse that jets out to the lead and maintains it. Little Menace provided a token threat in the Gazebo before getting outrun over the final furlong.

A big question for Long Weekend will come with more distance in future races. It will be interesting to see how he maneuvers to the front of the pack from the far outside post, but he has been the leader at the quarter pole in all four races. Many of these horses are fast starters. Long Weekend has been in cruise control by the middle of the race in the three wins. How will he fare if challenged a little bit harder here?

I’ve been sitting here thinking of ways to skirt the 7 Eight Rings and the 9 Long Weekend because I do really like the 1 Little Menace and the 3 Echo Town. Echo Town wasn’t raced as a two-year-old and only has three data points, but all three have been impressive. Heading into Thursday’s races at Oaklawn, Ricardo Santana Jr. was a 21% jockey in sprints and he’s the rider for Asmussen on Echo Town.

I’ll add Long Weekend to the exacta box, too. We’re not talking about a big pay day in the Bachelor Stakes in all likelihood, but I think we can make some money with what appears to be a chalkier race.